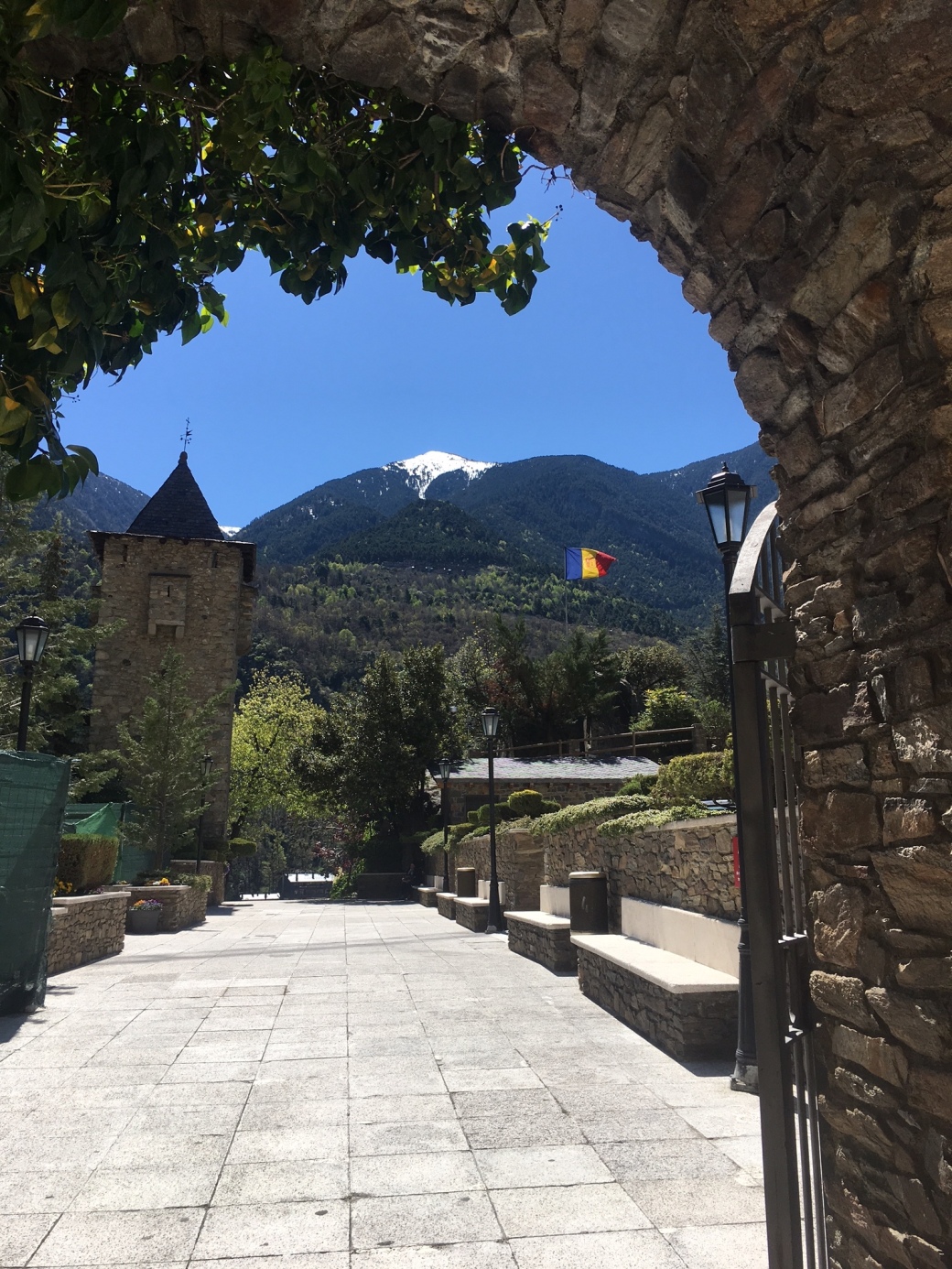 With a population under 90,000, the country of Andorra has less people than my hometown of Kenosha, Wisconsin. It’s majestically tucked high up in the Pyrenees, landlocked between France and Spain. I read the food there is excellent, featuring a blend from both its superb neighbors, so that was enough for me. I’m going. With 24 hours off from running yoga retreats I hopped a three hour bus to sightsee and eat in a new land, but first I had to almost get way lost and kidnapped. 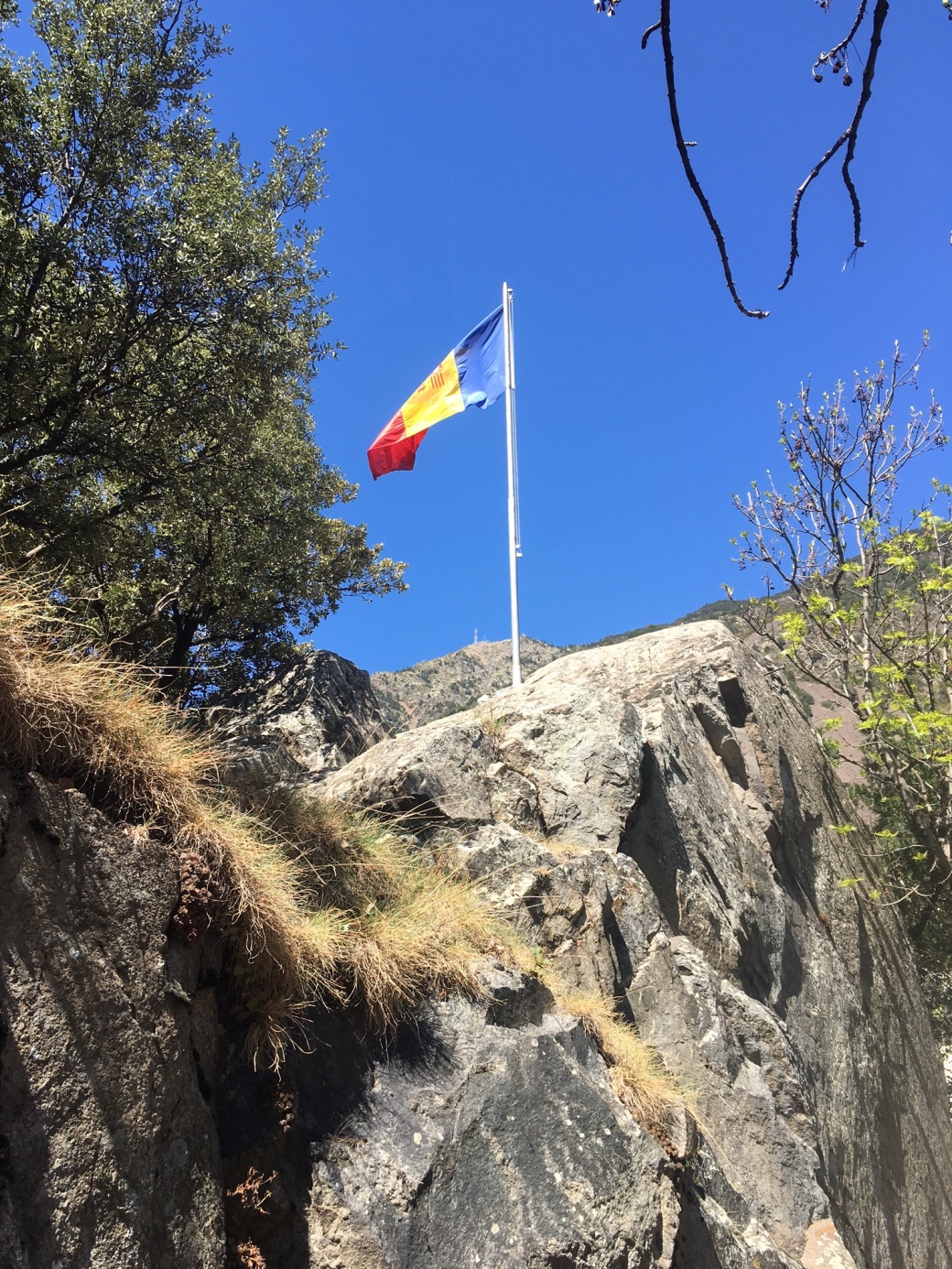 Directions to my hotel in the capital Andorra la Vella were simple enough. Get on the bus in Manresa, Spain, get off the bus at Estacio d’Autobuses d’Andorra, walk up Carrer Bonaventura Riberaygua, turn right on Meritxell (the famous boutique and jewelry avenue, so easy to find) and continue on Carlemany to the 4-star Eureka Hotel. 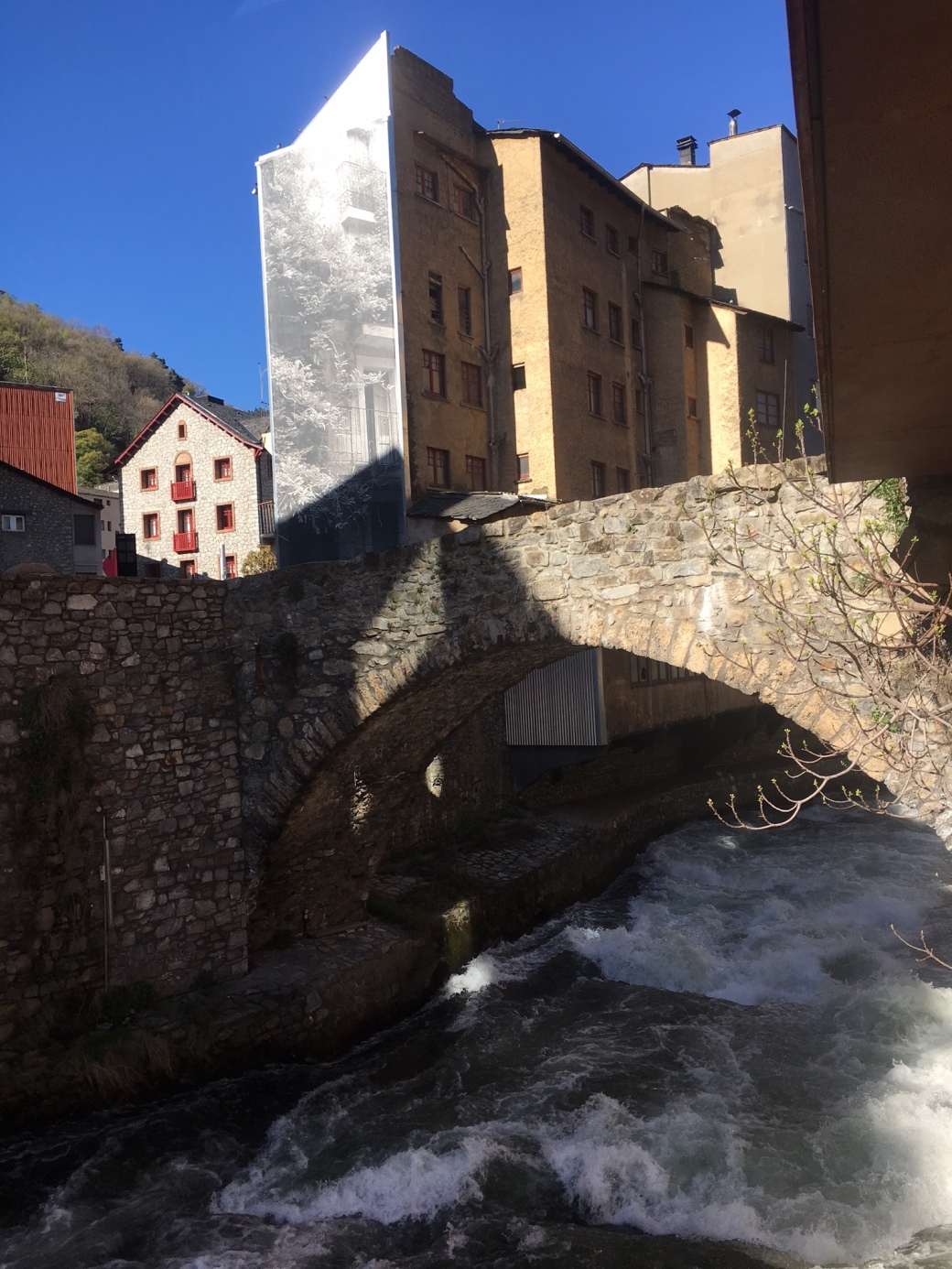 The bus jerkily climbed up and followed winding roads through mountains reminding me of the western U.S. Some peaks were still bathed in the late day sun while the valleys were dark and cold looking in the shadows. Mostly we went through isolated fields and vast woods with rivers running down in the opposite direction, occasionally stopping in a small town where other passengers got off. When the bus hissed to a stop in the Estacio d’Autobuses I was the only rider left. I asked the driver, “Andorra?”

“Si, Andorra,” he replied while standing and walking off.

I climbed off as well, and went inside to the men’s room before hitting the streets. It was late afternoon. I figured from here I would find a glass exit door onto Carrer Bonaventura, strut to my fancy hotel and be relaxing in a nearby restaurant by dark. After several days of eating vegetarian at the latest yoga retreat, in my mind’s eye I saw a towering hamburger of local beef, ham and cheeses, next to a plate with potatoes and garlic mayonnaise.

A knock on the door took me out of my dinner fantasy. “Andorra!” It was the bus driver calling. Walking out, I was quickly led to the back seat of a taxi, then immediately sandwiched between two very big dudes.  We sped off, the driver never looking back. Everyone spoke rapid fire what sounded like a mix of Spanish/Catalan/Portuguese. Much laughter, too, which calmed me until I recalled that’s what the mafia did in “The Sopranos” before shooting a guy.  The man in the front passenger seat even turned around to proudly show me a suggestive text cartoon he just received. It was almost too much for him as he guffawed heartily, fat, happy tears sliding down his ample cheeks. 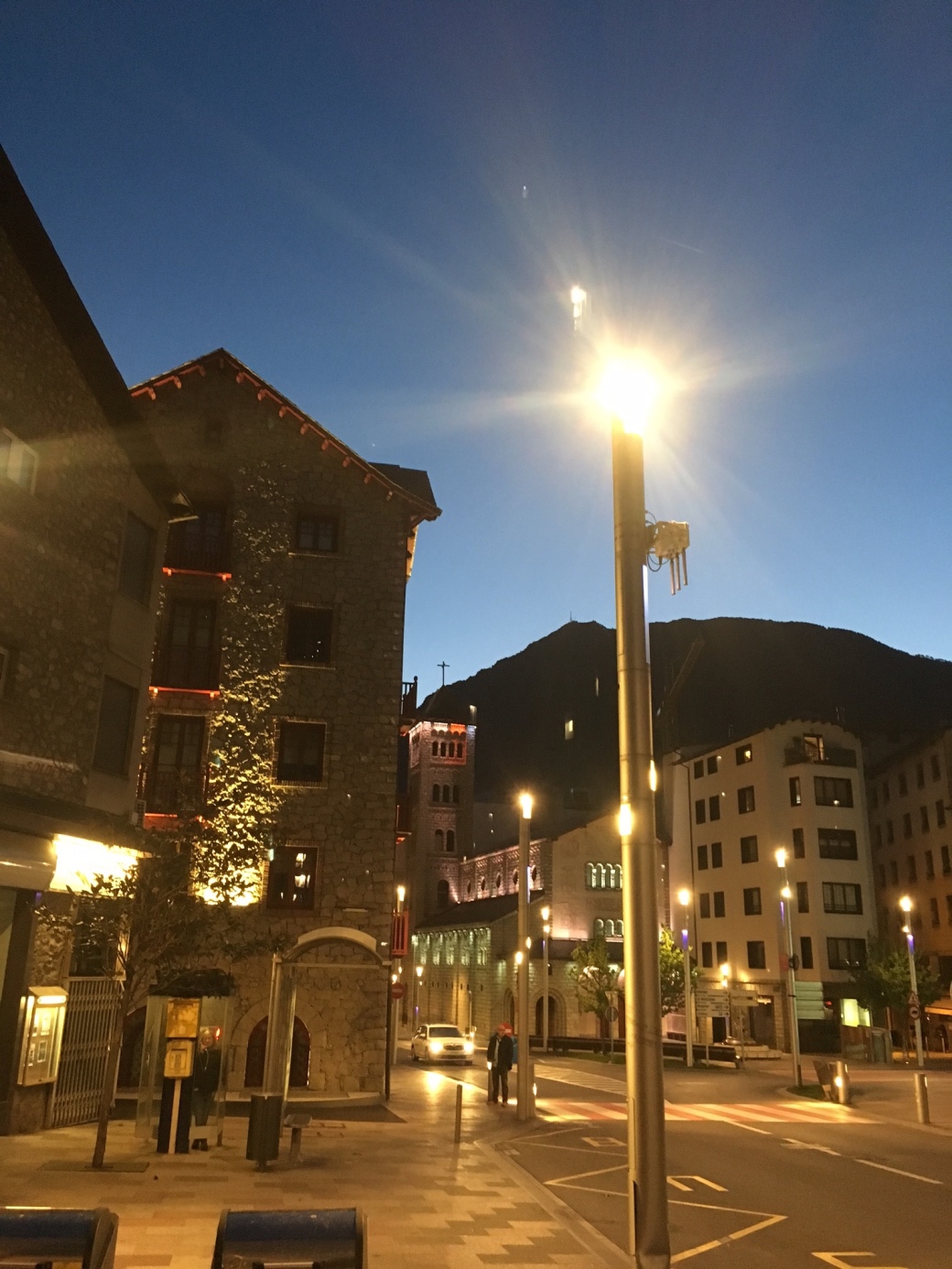 After about ten minutes we approached a border crossing. I dug into my backpack for the passport, but our taxi was waved through without stopping. This is weird. Then it was another ten minutes or so of racing into a city at dusk. At a red light, I felt a tap on my left shoulder and once again heard my new name.

All my new, large friends in the taxi pointed across the street to a lot with buses silently sitting in the dark. “Estacio d’Autobuses, Andorra,” said the driver. I climbed out, alive, wallet intact and apparently free to go.

In the narrow streets and centuries’ old alleys of Andorra stand store after store showcasing wonderful foods and an array of duty-free shopping because of the country’s tax haven status. My hotel was centrally located to it all. Ski vacations are a big part of the economy, and with the season just over I was able to reserve a 40 Euro room deal with breakfast at the 4-Star Hotel Eureka. 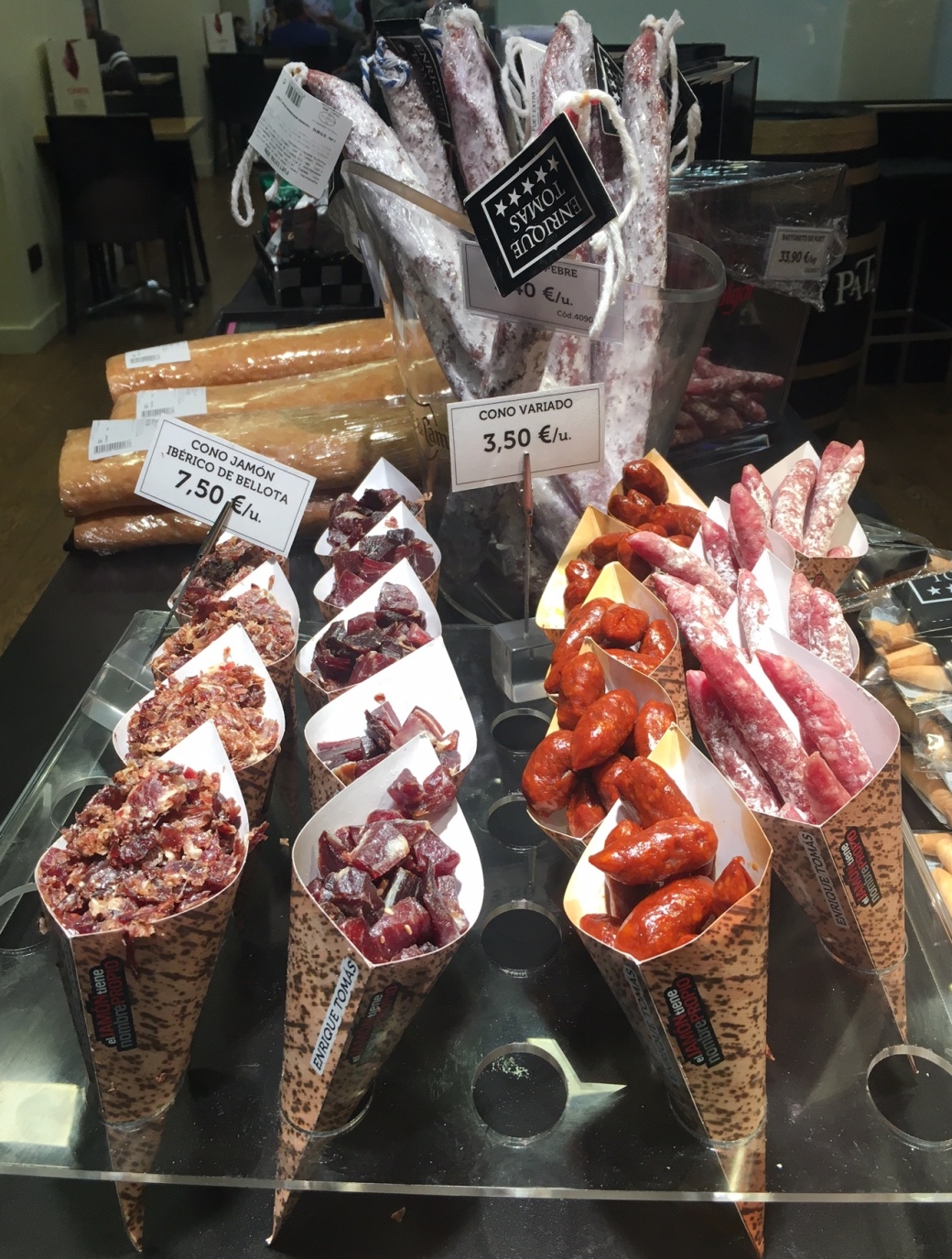 I passed by even this display of meat candy just to get to the hotel. When I checked in late there was just one man working the front desk. Across the hall a group of French seniors on a tour were happy on the dance floor shaking to a pounding beat. It was all women, the husbands must have called it a night already. I went up to my room but came back down quickly to get wifi help. The front desk guy was out from behind the desk busting a hard move to the music. Speaking of meat and candy, he was dangerously surrounded by the ladies. Good for him. He spotted me and came over to provide the wifi password nonetheless, and then hurried back to his place inside the party circle.

Hotel Eureka had some wear and tear. I must say in all honesty that the hotel rating was a mystery, unless it was based on four stars out of twenty-five or something like that. Still, for the price it was fine as I was in late and out early wanting to see as much of Andorra as I could.

The morning commenced with a hike up the mountains to look down on Andorra la Vella. I wanted to get in lots of exercise to justify a good lunch. I did accomplish that, climbing high in the thin air, and that’s when I realized this is a place that truly appreciates art. Look through the tree branches and gaze across the top of the city. Someone painted an incredibly large couple in embrace on the wall of the mountain.

Later in the day, I got a closer look:

Over the next several hours, I saw all kinds of art, old and new, conservative and not conservative at all. That’s Andorra. A real mixture of sights. Around one corner there’s a Salvador Dali statute, and then there’s a fashion model billboard or a historic church or schoolyard. 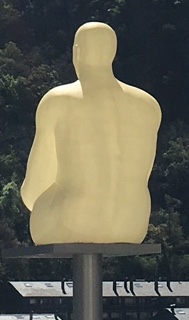 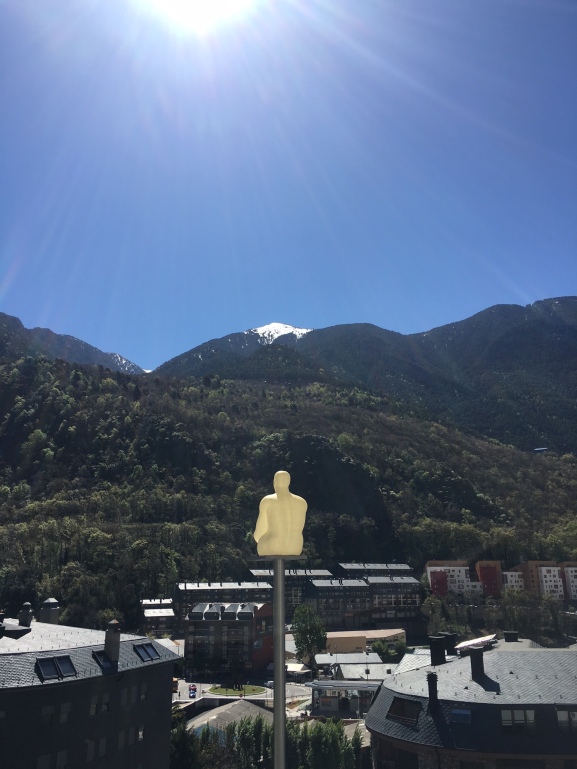 A really tremendous April day to check out the country of Andorra!

I made it to Casa Teresa on Bonaventura Armengal just before 1:00 when a traditional, deal of a local lunch starts. The courses included salad with anchovies, famous Fideus with a rich garlic butter (are those truffles in there?) prepared right at the table and a nice flan for dessert. Amazing! 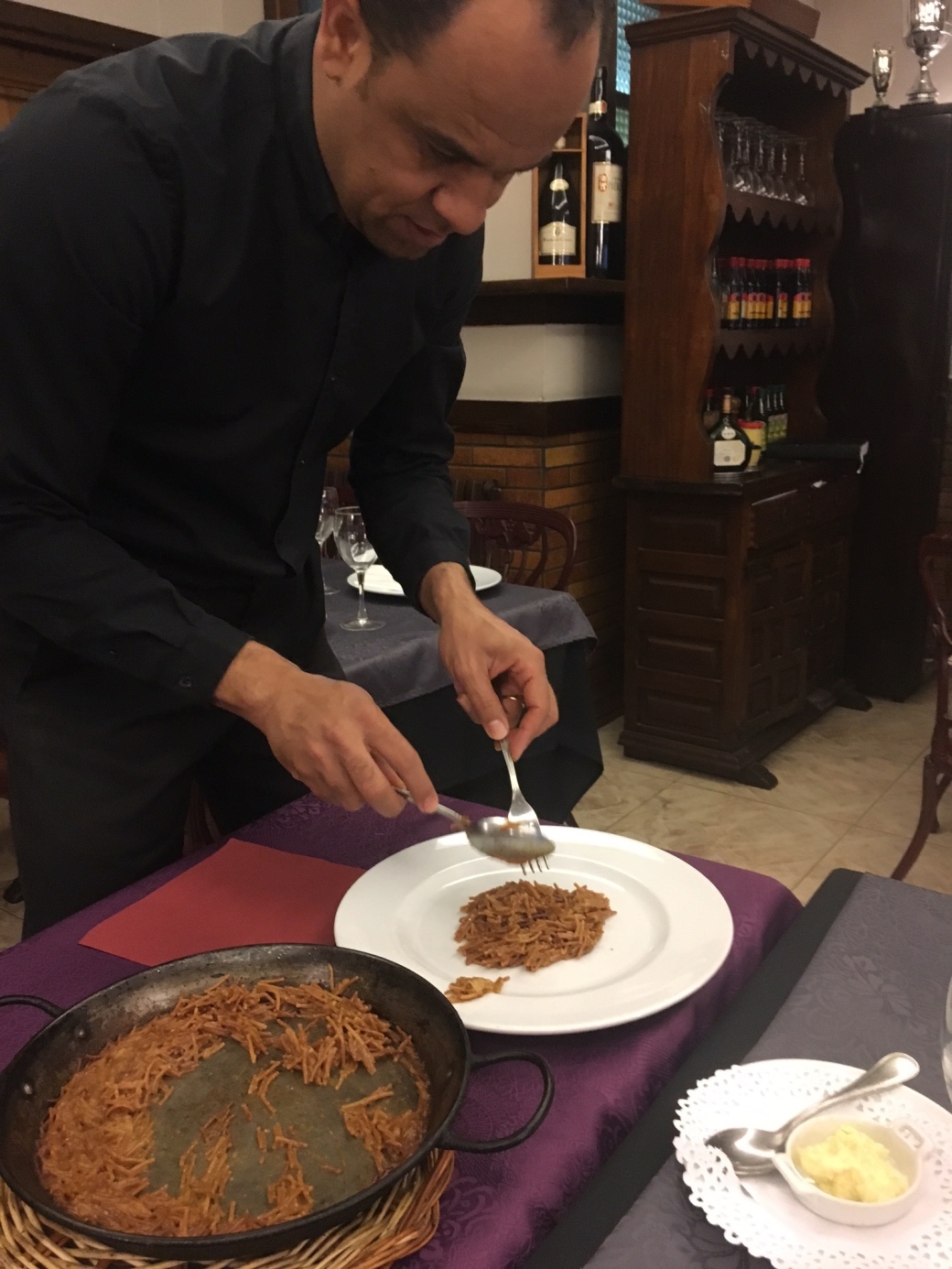 It was a lazy, relaxing one bus but no taxi bus ride back to Manresa. I did some grocery shopping and was back at the Amina Mundi yoga retreat castle in Canet de Fals by 8:45 p.m. Louise, our cook from Amsterdam was relaxing in the courtyard next to the gardens she likes to work in.

“How was Andorra?” she asked.

“Ever see the Sopranos?”

13 thoughts on “Call me Andorra, but don’t call me late for lunch.”