You can easily miss the entrance to my Barcelona hostel.

The train ride costs only 2.15 Euros, ends at Placa Catalunya and I march up the stairs to join the throngs marching down La Rambla, Barcelona’s most famous street. It’s dusk on a cooler than usual but dry Thursday in late April and there’s energy in the air. A lot of people are preparing for a fun night! It’s a left down narrow, bustling alleys lined with shops and restaurants through the square named for George Orwell. More turns in the labyrinth of the Gothic Quarter and then I find Carrer de Milan’s 4 and the secret door of Mapamundo, my lodging for the next couple nights.

How apropos the message someone added in the graffiti: “Don’t waste your time. Roll the dice and go on playing.” Will do! 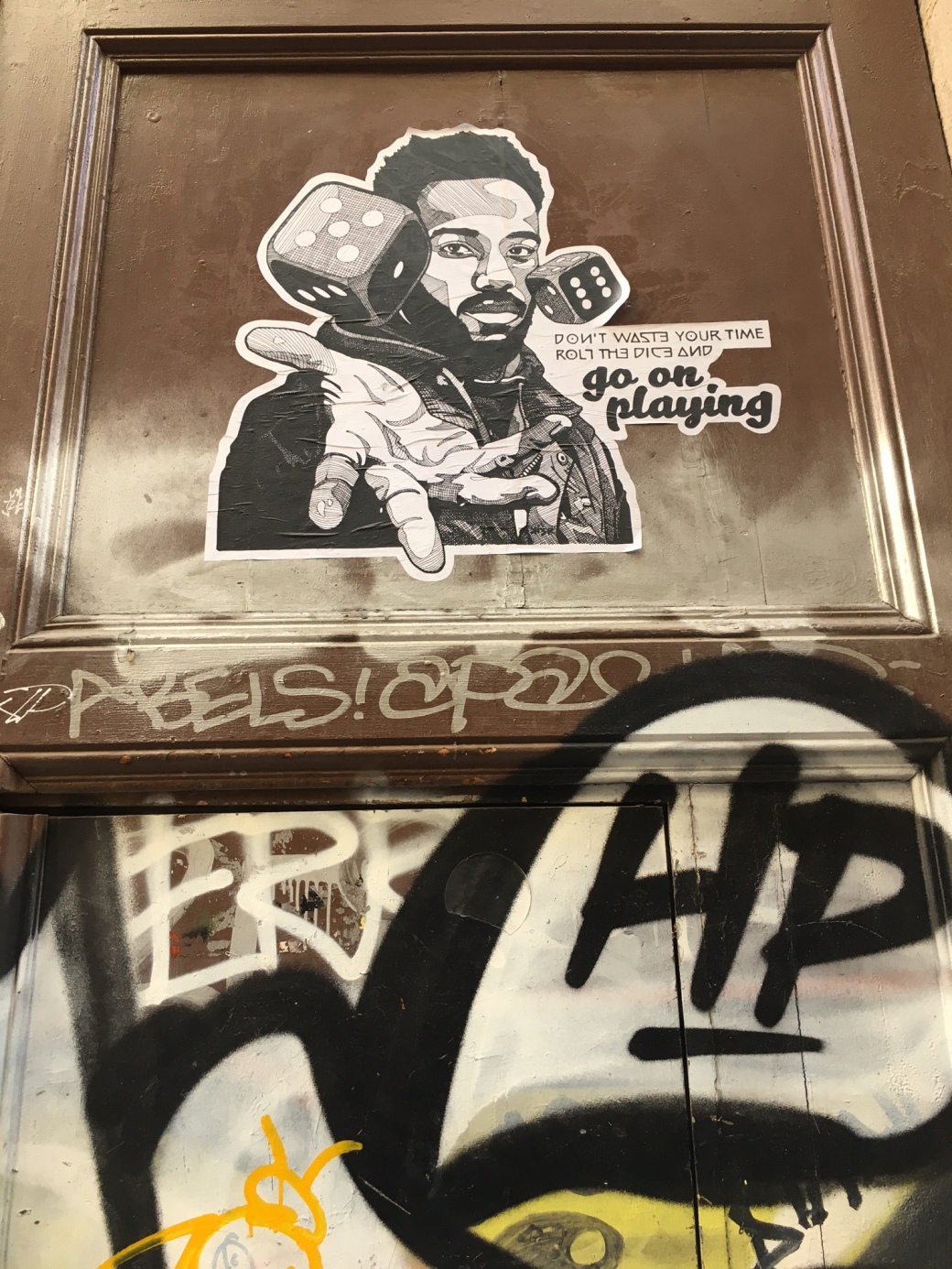 Once buzzed in it’s a climb up some steep, dark stairs but Mapamundo seems like a steal. 50 Euros a night. My own double room, just have to share the kitchen and bath with three other rooms and over the next couple days on the rare occasions I see someone they are very nice. Clean, cool interior design. Ideal location within walking distance to most everything. 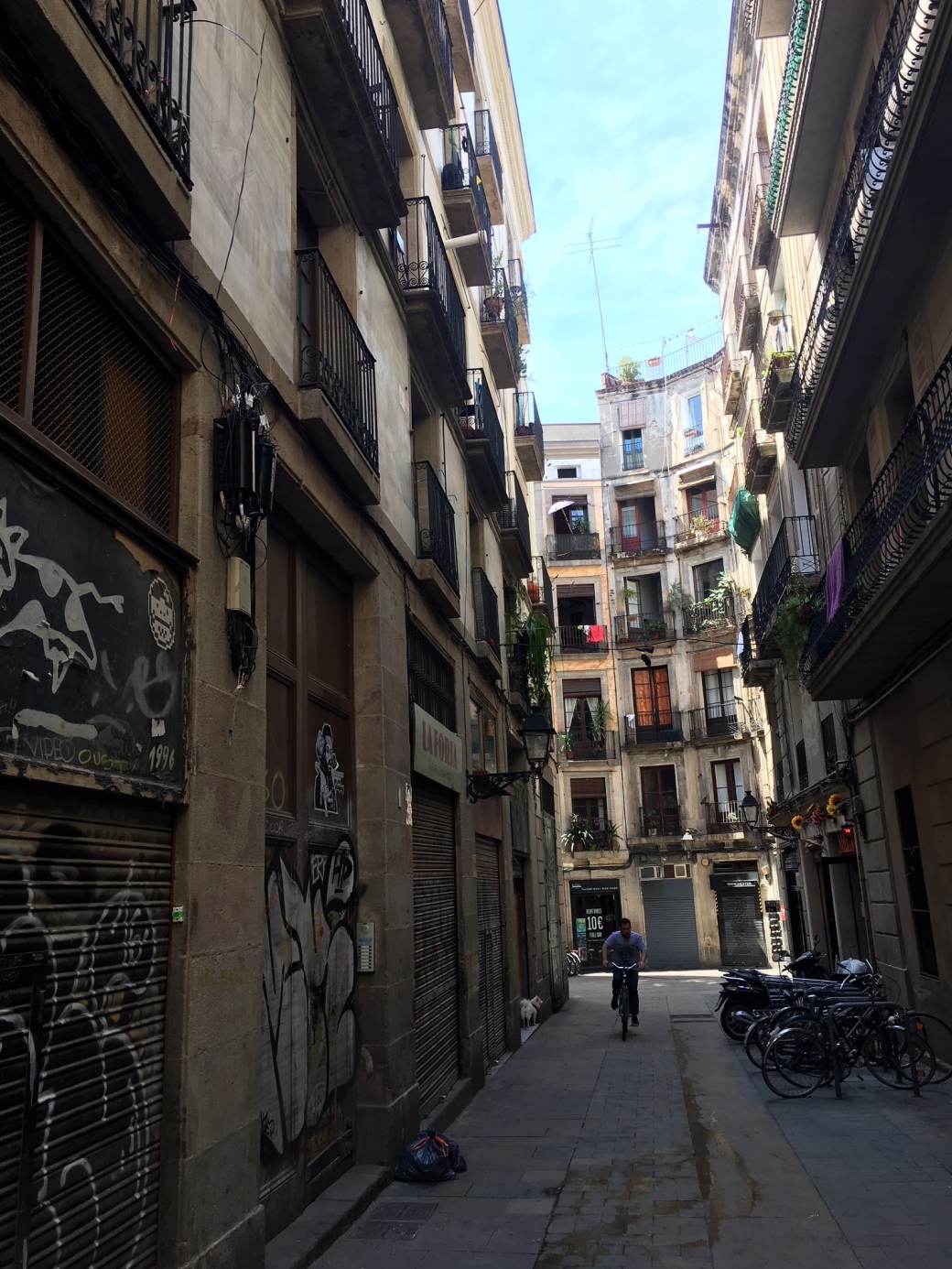 What’s the catch? The free ear plugs on my bed give it away. There’s a party on the streets below 24/7. Well, maybe not 24 hours a day. I’ll learn that there’s a lull and relative quiet between first light and about 6:45 a.m. Solution? Can’t beat ’em, join ’em. 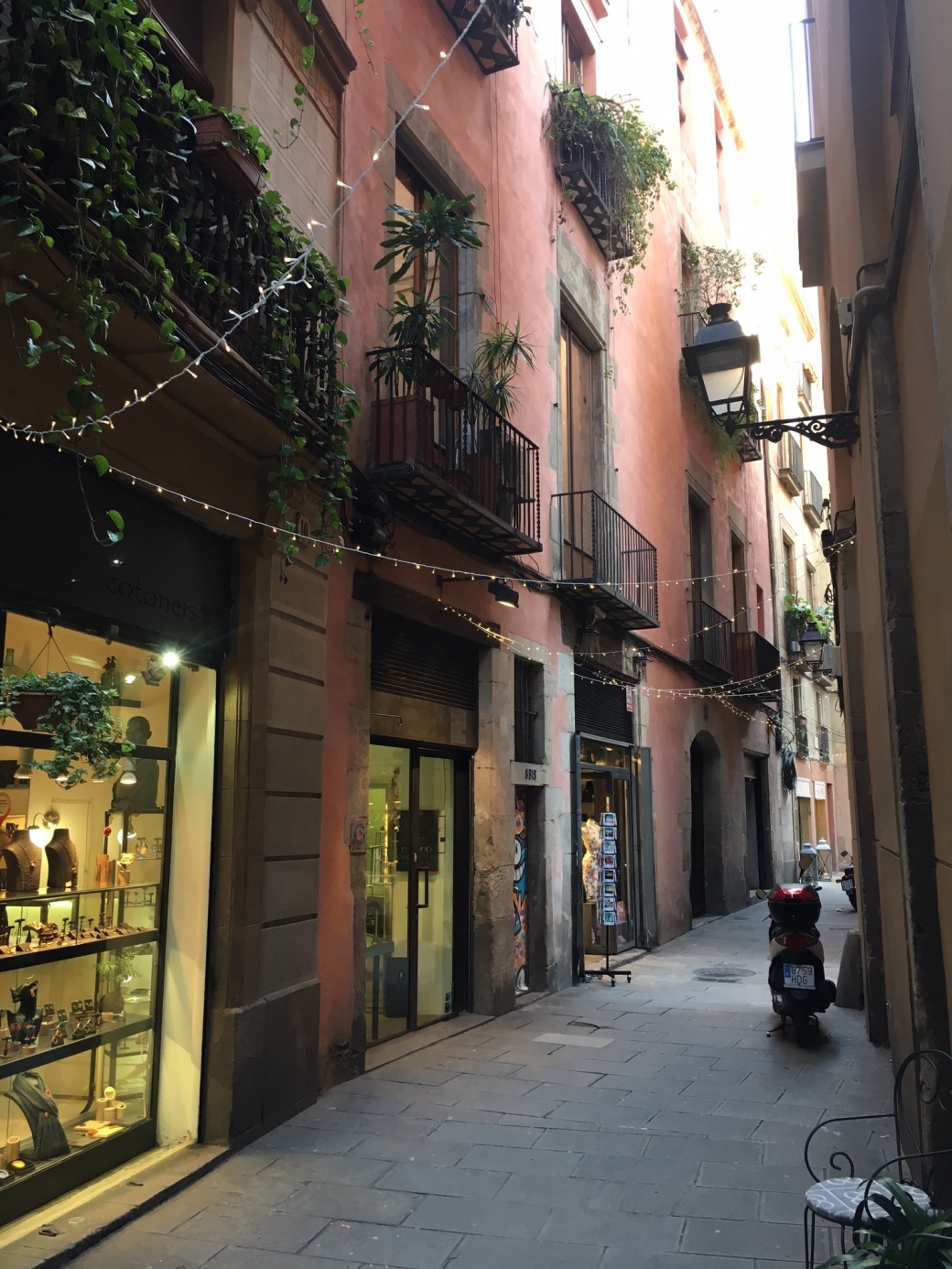 So out on the streets I go just as the lights come on.

At 7:00 p.m. I join a Tapas Tour. I’m with great people from an array of countries, including one woman who plans on attending the Wanderlust yoga festival at Stratton, Vermont in June. I’ll be working there also. Small world!

The Tapas Tour costs 20 Euros providing stops at three restaurants in the El Born and Barcelona districts with food and drink included. A tremendous deal but even more we are taught the indispensable skills of pouring cider from an extreme height to enhance its flavor, and then how to stream sangria into our mouths from a Porron, also from a distance of arm’s length. For the latter lesson we practice first with water, a good thing as on my initial attempt I give my face a good washing. In our group of 15 people everyone must try the Porron. Hands down I am the worst, but I am determined to practice and improve! 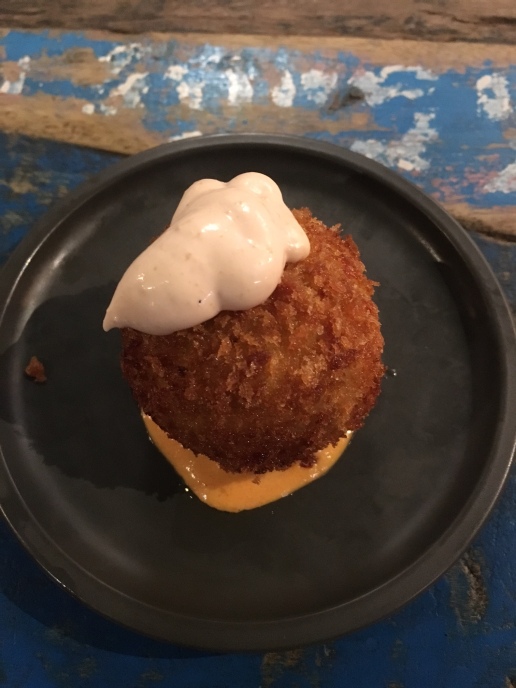 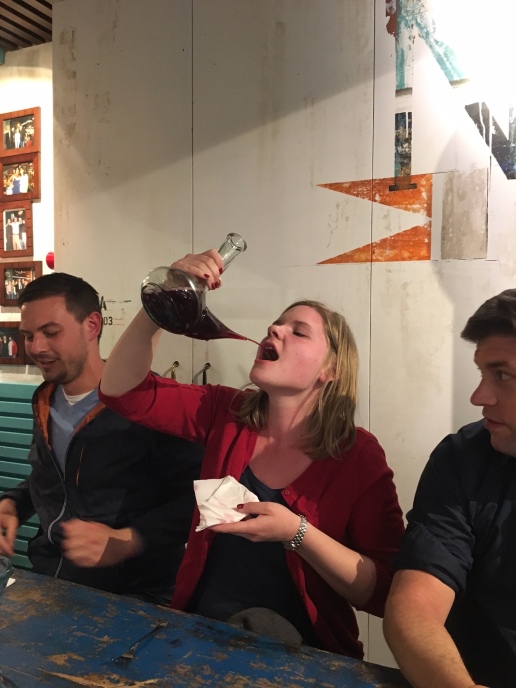 Going out for tapas and socializing with others, I learn, is the cornerstone of Spanish life.  This becomes my approach to dining over the next few days in Barca. Sightsee here, eat. Sightsee there, eat. Some photos:

Speaking of food, and plenty of it, La Boqueria awaits! Right off La Rambla (without La Rambla tourist pricing, I learned) this bountiful market offers everything delicious about Spain! More photos (warning, don’t view when hungry): 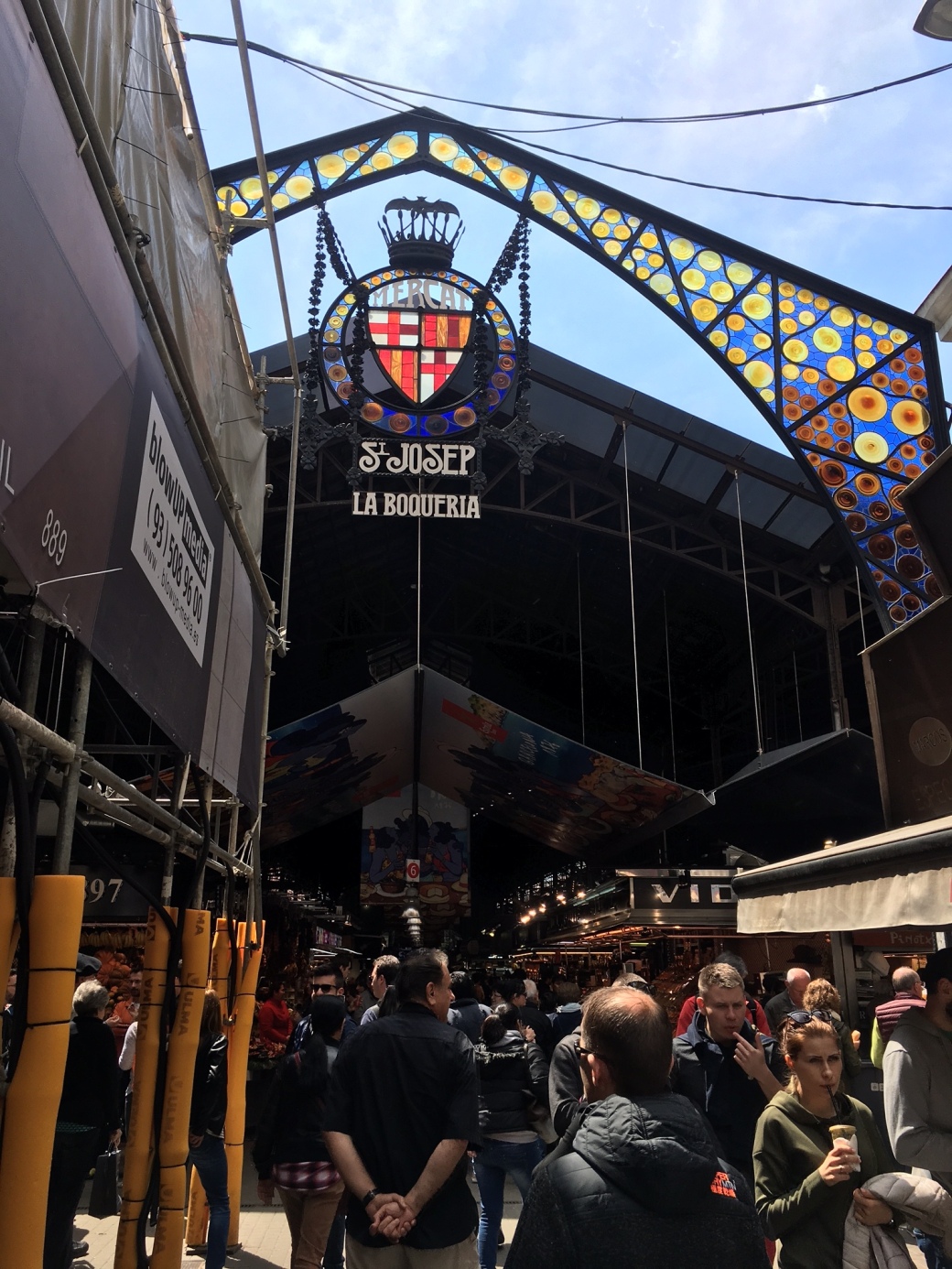 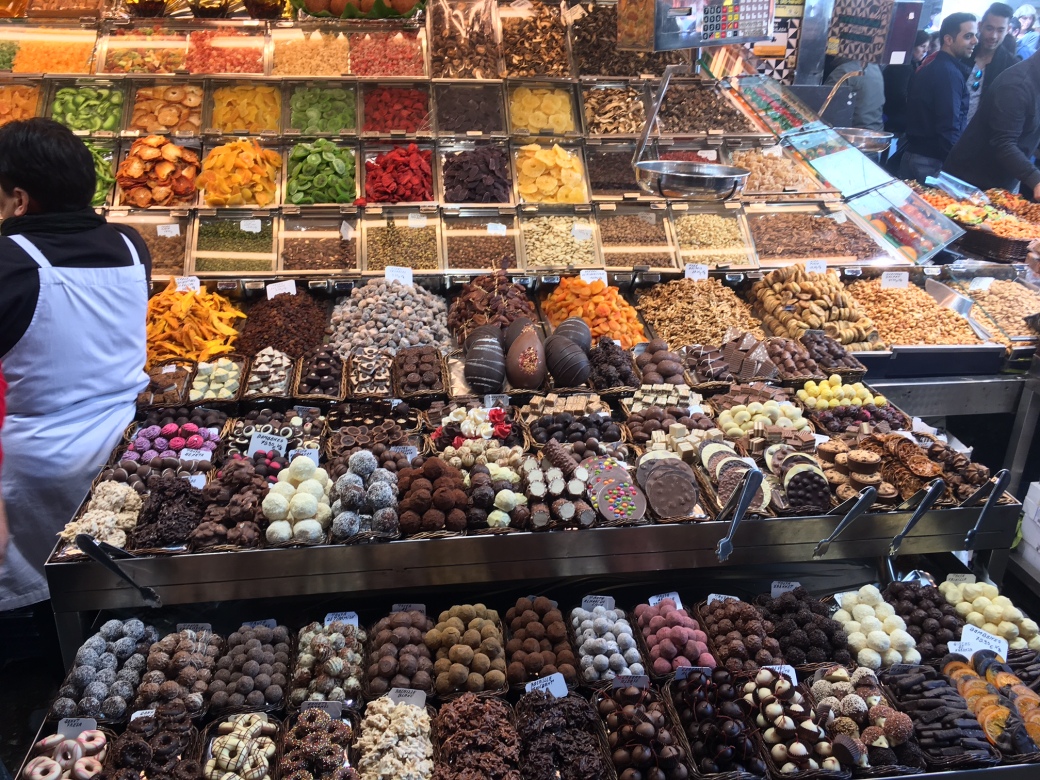 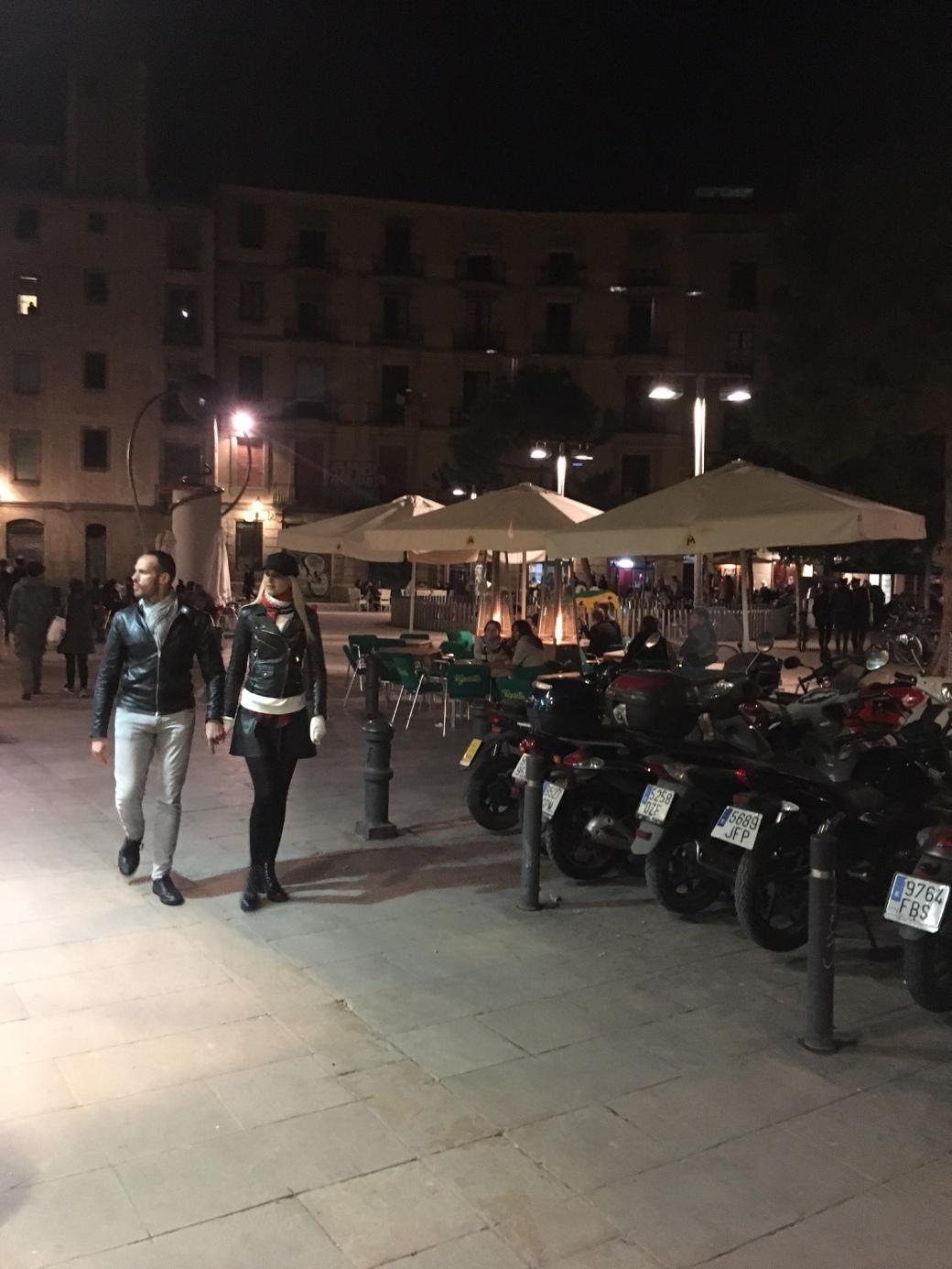 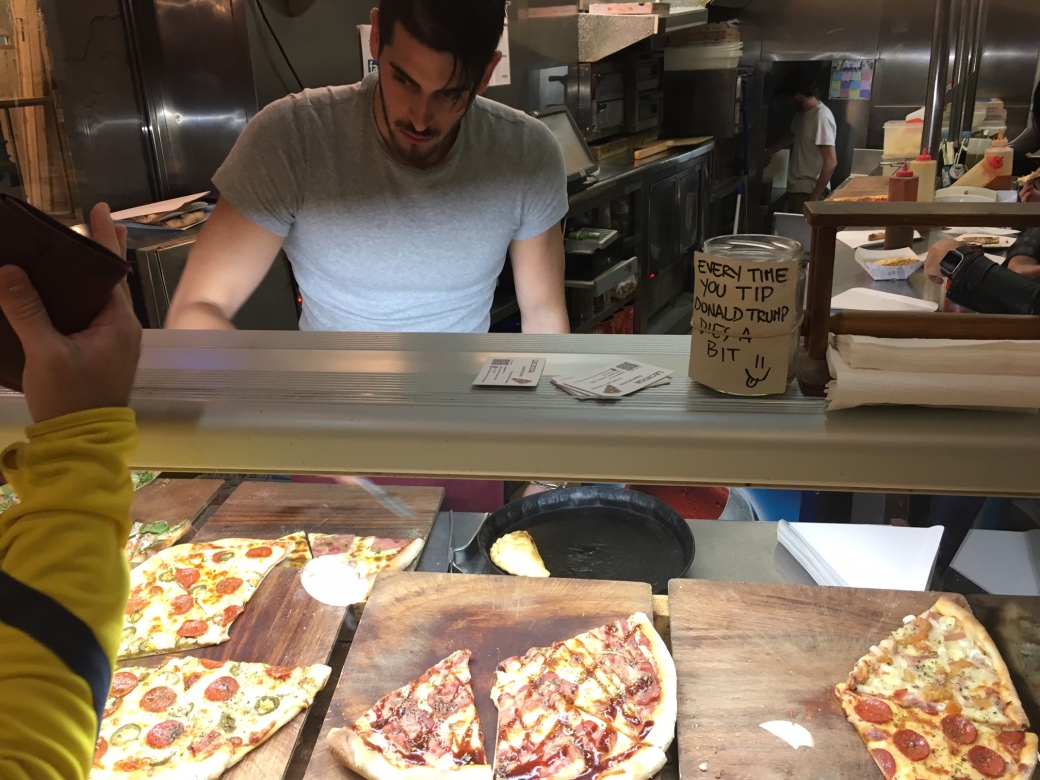 Note the tip jar 🙂 During my international travels this is not an uncommon sentiment.

In the morning, I join a walking tour! I see the building Christopher Columbus stormed in requesting of King Ferdinand and Queen Isabella to support a voyage to prove the world isn’t flat: 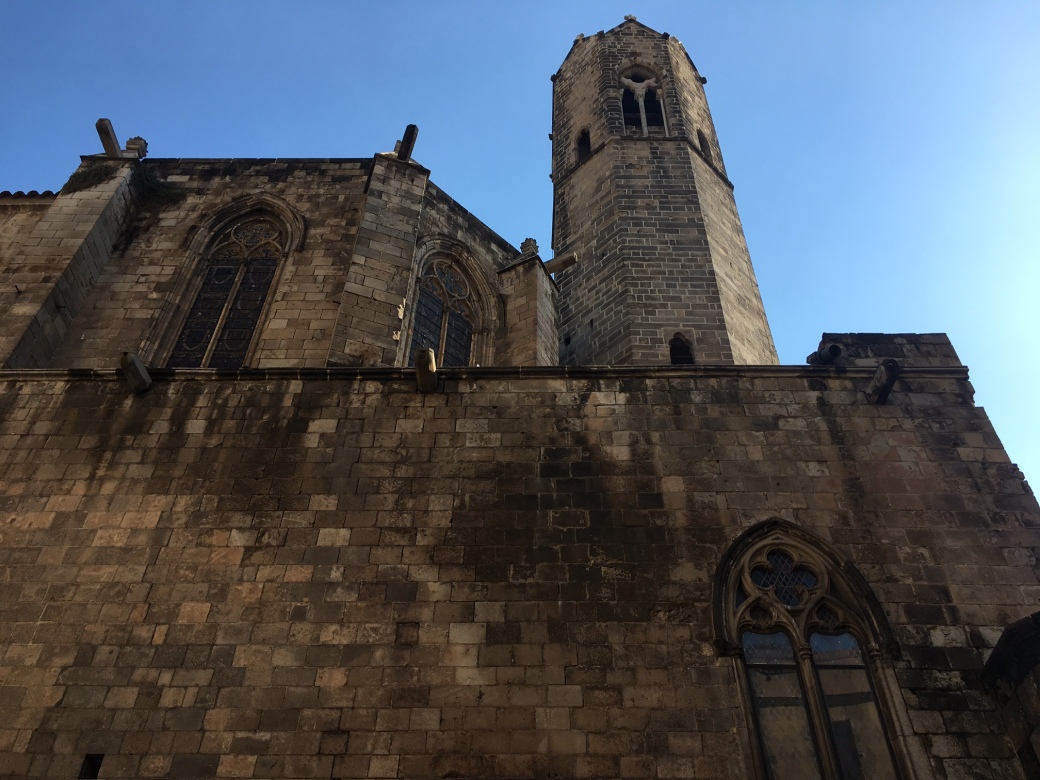 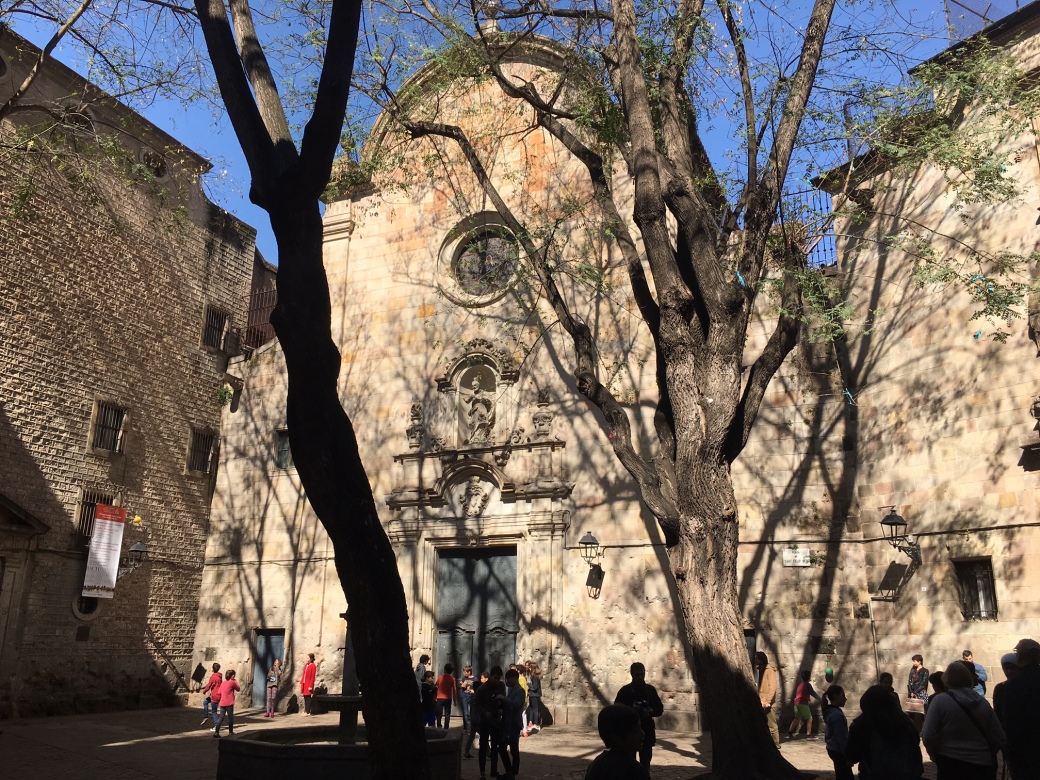 And where Picasso grew up, studied and like to spend his time, hearing that now the structure is even being considered as a homage to Woody Allen in thanks to his movie, “Vicky Cristina Barcelona.”

I walk some more. Another day rolling onto the next, music, monuments, amazing, amazing…

In the early morning, down by the water now I see innumerable boats and the floating statues: 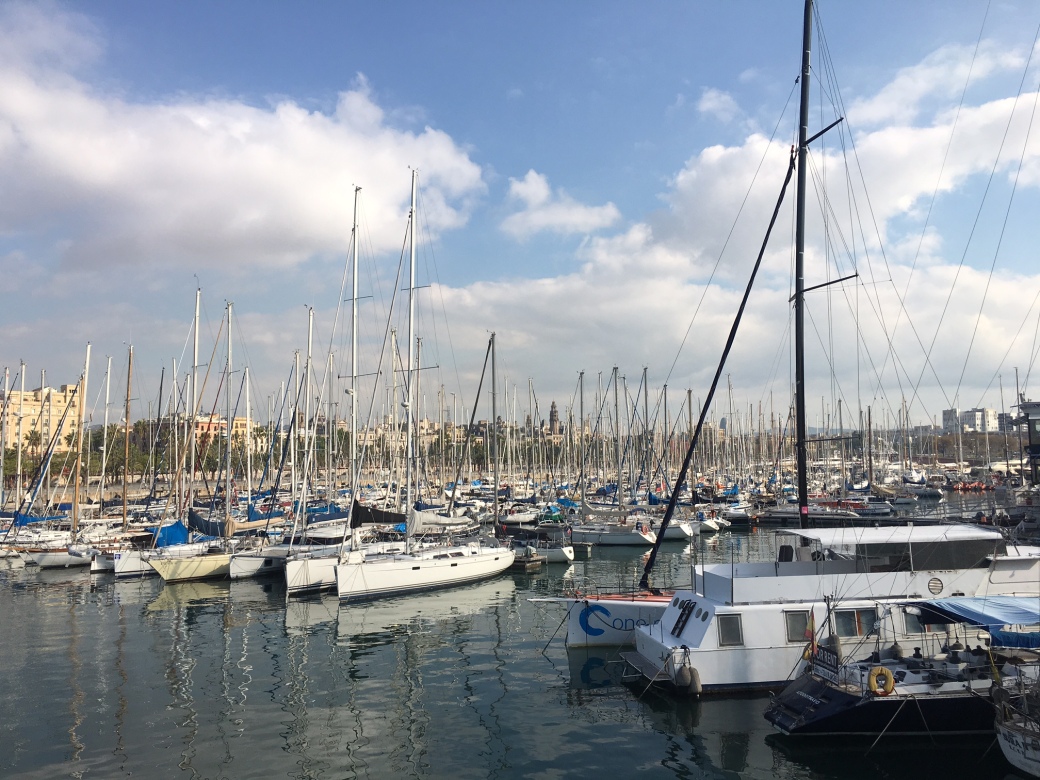 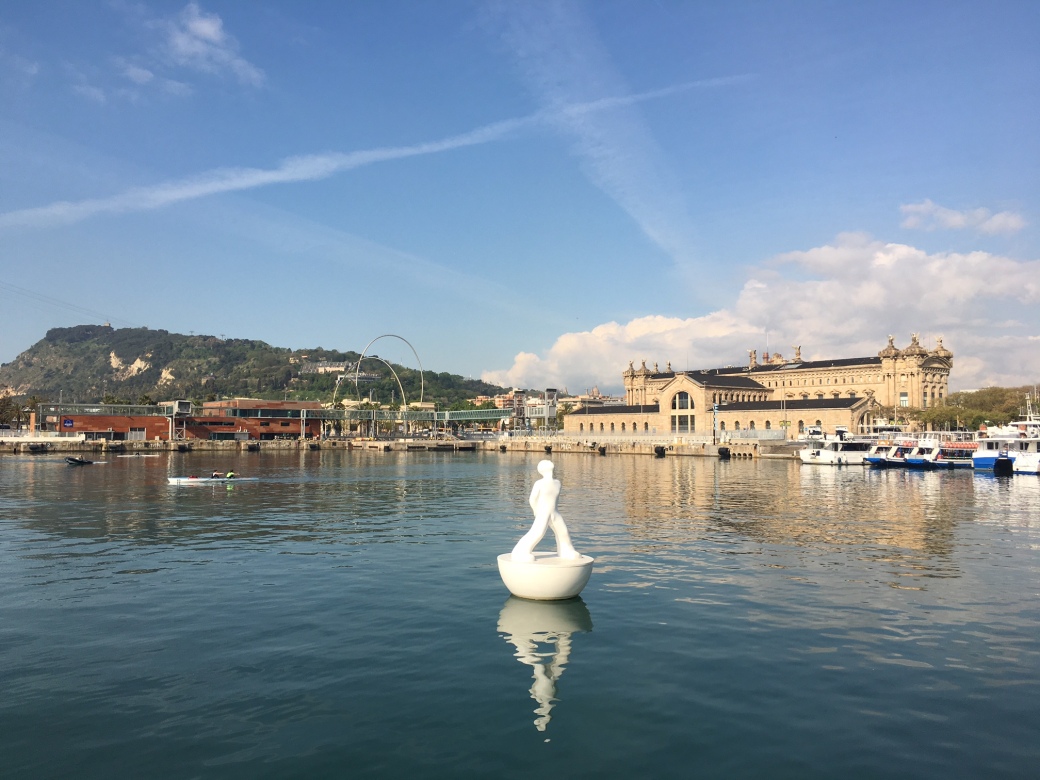 One statue reminds me of the yoga pose Prasarita Padottanasana, which I love to do as well. This also reminds me how I got here, why I am traveling the world; next stop Southwest France to a castle/soon to be yoga retreat center.

It’s a yoga world. Hope you will join me!