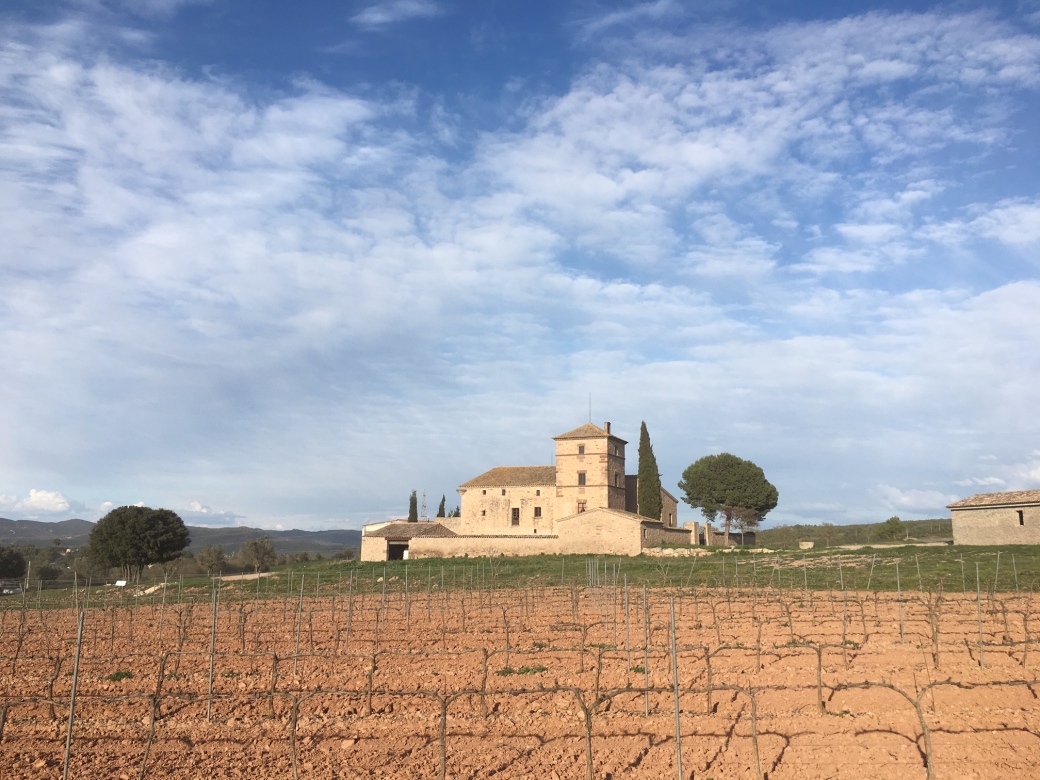 My flight to Spain went unbelievably quick. Departed in a NYC darkening spring dusk and was walking through a just waking up Barcelona-El Prat Airport before 7:00 a.m. the next morning. Now all I had to do was follow my instructions – bus, train, another bus and then a ten minute walk through vineyards – to get to the Anima Mundi retreat center one hour outside the city.

The first bus speeds past my stop – Plaça d’Espanya – where I wanted to catch Train R5 to Manresa Alta at the underground station. That’s okay, because I see we’re now on the Gran Via. As fate would have it, last night on the plane I was reading Adam Hochschild’s great book, “Spain in Our Hearts” about Americans in the Spanish Civil War, 1936-39. In it Hochschild describes Barcelona including the Gran Via so vividly that I decide quickly to let this bus go about almost a mile down Gran Via before jumping off. I turn around and gratefully enjoy the early morning stroll on this historic street back to Plaça d’Espanya. Just got here and I’m walking the Gran Via already!

I make it back to Plaça d’Espanya, take a street elevator down to the station and find out that the R5 leaves in an hour. Not wanting to waste the time down there, I head back up to the street and walk around in the sunshine. It’s still early. People are rushing off to their jobs. School buses drop off throngs of energetic kids. This is also the location of the two Venetian Towers and the National Art Museum of Catalonia (Museu Nacional d’Art de Catalunya). This is also where Barcelona used to provide public hangings. Used to, I’m happy to report. 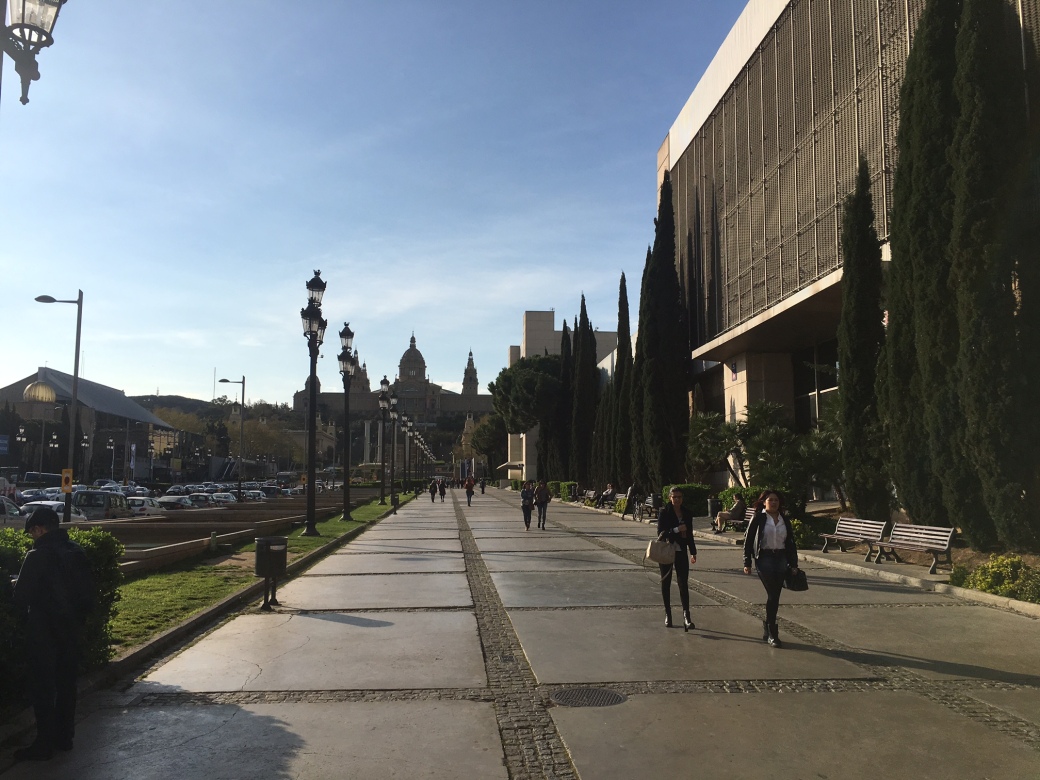 The second bus of the day takes me to Canet de Fals. A couple of extremely kind women on the bus show me where to get off. One lady, because this is her stop also, even leads me down the street. We pass her house. How do I know it’s her house? Because she throws the bag of dog food she’s carrying over the gate without missing a step. We walk together another 50 yards or so during which she talks non-stop and keeps pointing to the right.

“Si,” I reply. I used to want to drive an El Camino car when I was younger, so that’s how I understand the right way. “Muchas gracias,” I tell her with my best smile because I want her to know I really mean it. Relieved, and reasonably sure I now have a fair chance of getting where I need to go, she sighs happily and returns to her dog food.

The houses of Canet de Fals stop and farmland immediately takes over. I’m walking in rural quiet now – only the wind and an occasional bird to hear – and the road turns from asphalt to dusty red dirt and gravel. I love the smell. It reminds me of the agriculture parts of northern Wisconsin. Vineyards commence in perfect rows rolling up against hills.

Soon Anima Mundi comes into view. Above it, in the distance I see the snowcapped Pyrenees, the border between Spain and France.

Anima Mundi is a recently renovated, medieval castle quietly sitting in the middle of nature, now serving as a retreat center with yoga classes and therapies. I walk by some of the local livestock who show me their horns and then go back to grazing, which is a good thing. The castle has its origins somewhere around the year 1200 and has most recently served as a winery. I’m here to lead yoga classes and help in the kitchen for the next few weeks.

Let’s have a look around!

I wonder if they left a couple cases of wine down there back in the day? I might have to check.

I have one day on my own until the first retreat guests arrive. In the late afternoon I walk back to Canet de Fals. It’s a very quiet time of day. I see almost ten cyclists dressed as if ready for the Tour d’France. There are more guys on road bikes than in cars.

House after house, nothing more, I’m just about ready to turn around and head back to the castle when I see a restaurant. Lunch is over, the place is empty. The woman in charge tells me her kitchen is closed, but finds me a table and cleans it. She puts a beer and a dish of olives down. Maybe I can get you a little snack, too, she says. A few minutes later she returns with this: 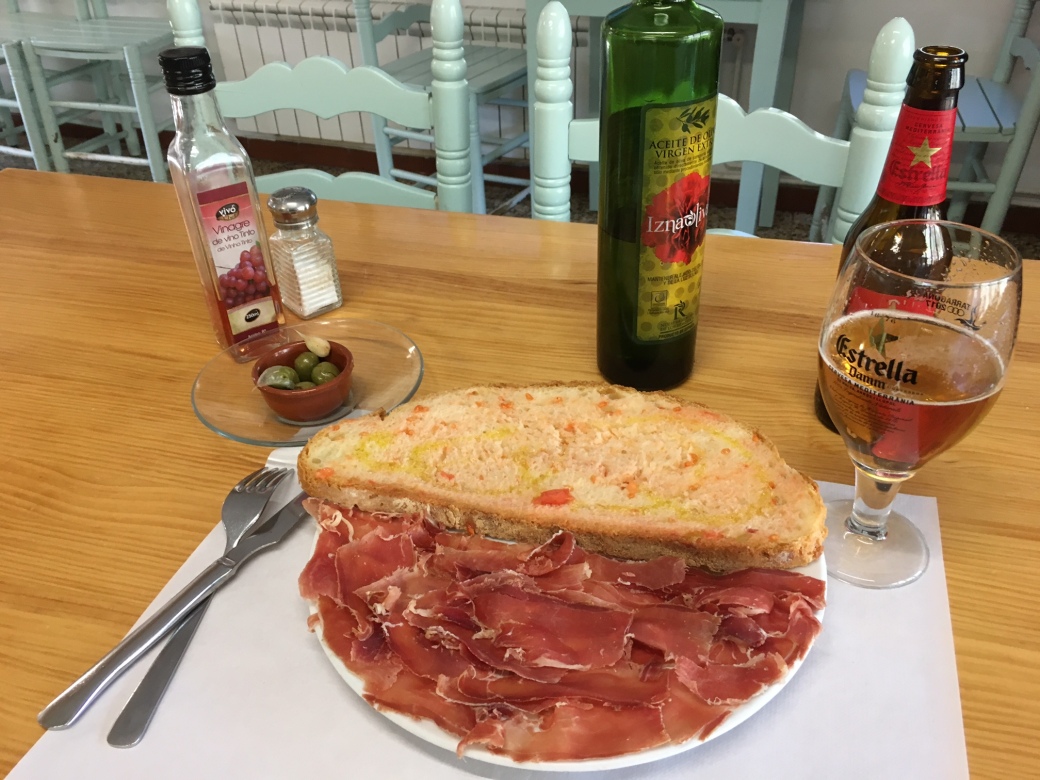 My kind of snack. We’re vegetarian for yoga retreats at Anima Mundi, but I like getting to know my new neighborhood!

3 thoughts on “Welcome to Spain!”