What can you do with 36 hours in Rajasthan (which means, by the way, “Land of Kings”), India’s largest state covering 132,000 square miles? I mean, that’s plenty of space to visit and discover. Our adventure included not only a majestic wedding, but other very wonderful things fit for a king along the way.

Our Shri Jasnath Asan team getaway started with a group camel ride. About six weeks ago I rode a sweet, peaceful camel named “Shanti” roughly 250 kilometers north of here outside the city of Bikaner. This time around my new camel greeted me not as kind Shanti would but more like an upset velociraptor with a stomach ache, his swinging neck presenting large, sharp teeth just before throwing up high and backward. As a result, to be honest, I was kind of apprehensive about riding so to get on the camel’s good side I affectionately nicknamed him “Mr. Barf” and then just “Barf” for short. I wanted him to know the smell from the drying vomit along his long frame was not a problem. We then seemed to get along extremely well.

Our camel safari staff settled Barf down with a white ribbon tied around his snout. I felt bad yet he didn’t seem to mind at all. Actually, he thrived. Eventually the bad scents faded away and Barf rode royally through the rolling waves of deep desert sand, showcasing a totally apropos bouncing strut for this Land of Kings. If camels are the ships of the desert, Barf performed like a state-of-the-art, newly launched aircraft carrier that day. I was very proud of him.

At dusk, our camels dropped us off at at a Thar Desert campsite providing nice tents (see photo below) with private bathrooms attached. This was my first experience “glamping” and it was great. Outside our tent doors Rajasthan musicians and dancers performed around a large fire. 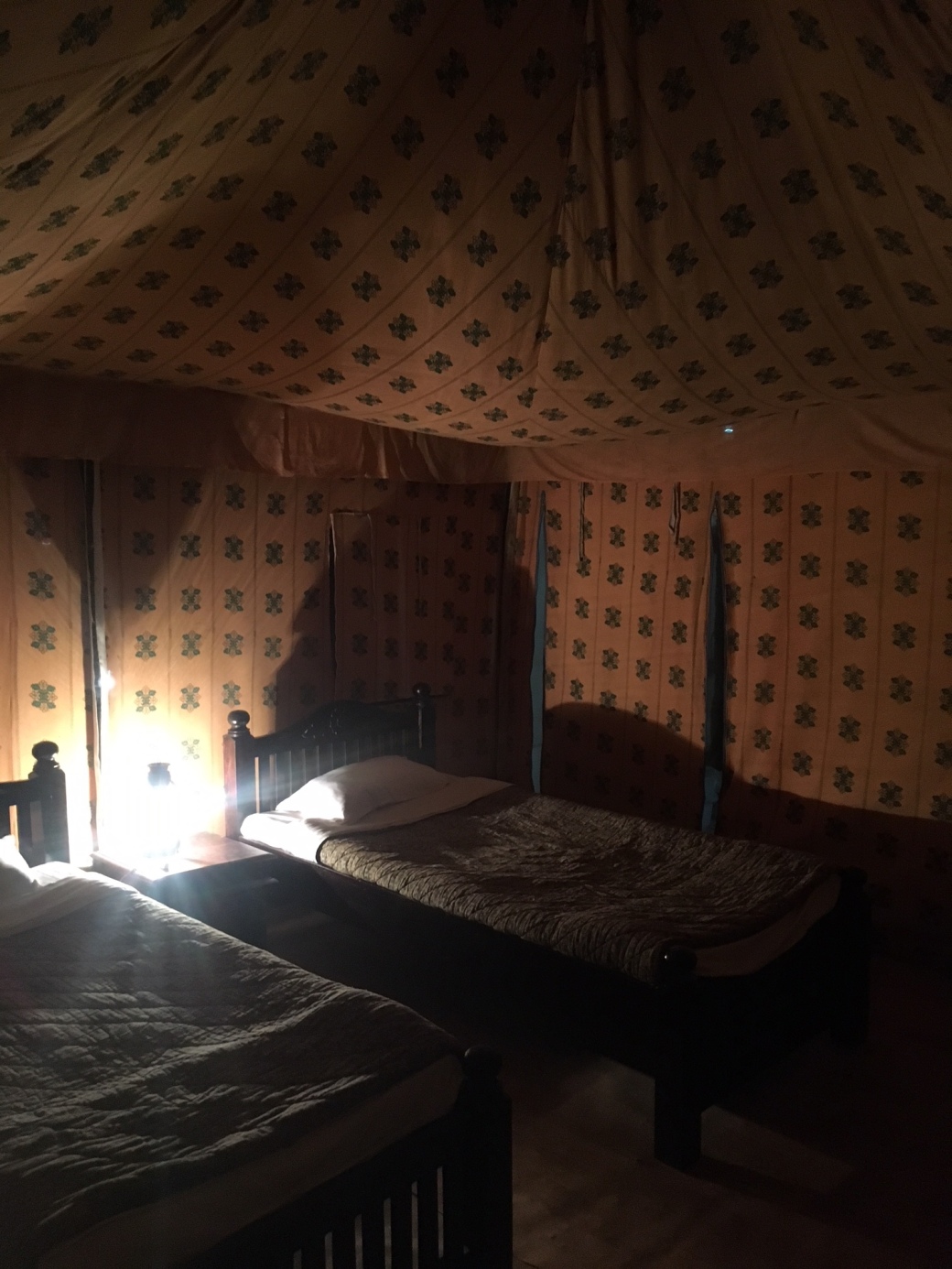 After enjoying a tremendous glamping dinner buffet served under the desert stars we checked out the music. The boys (and girl) in the band rocked! 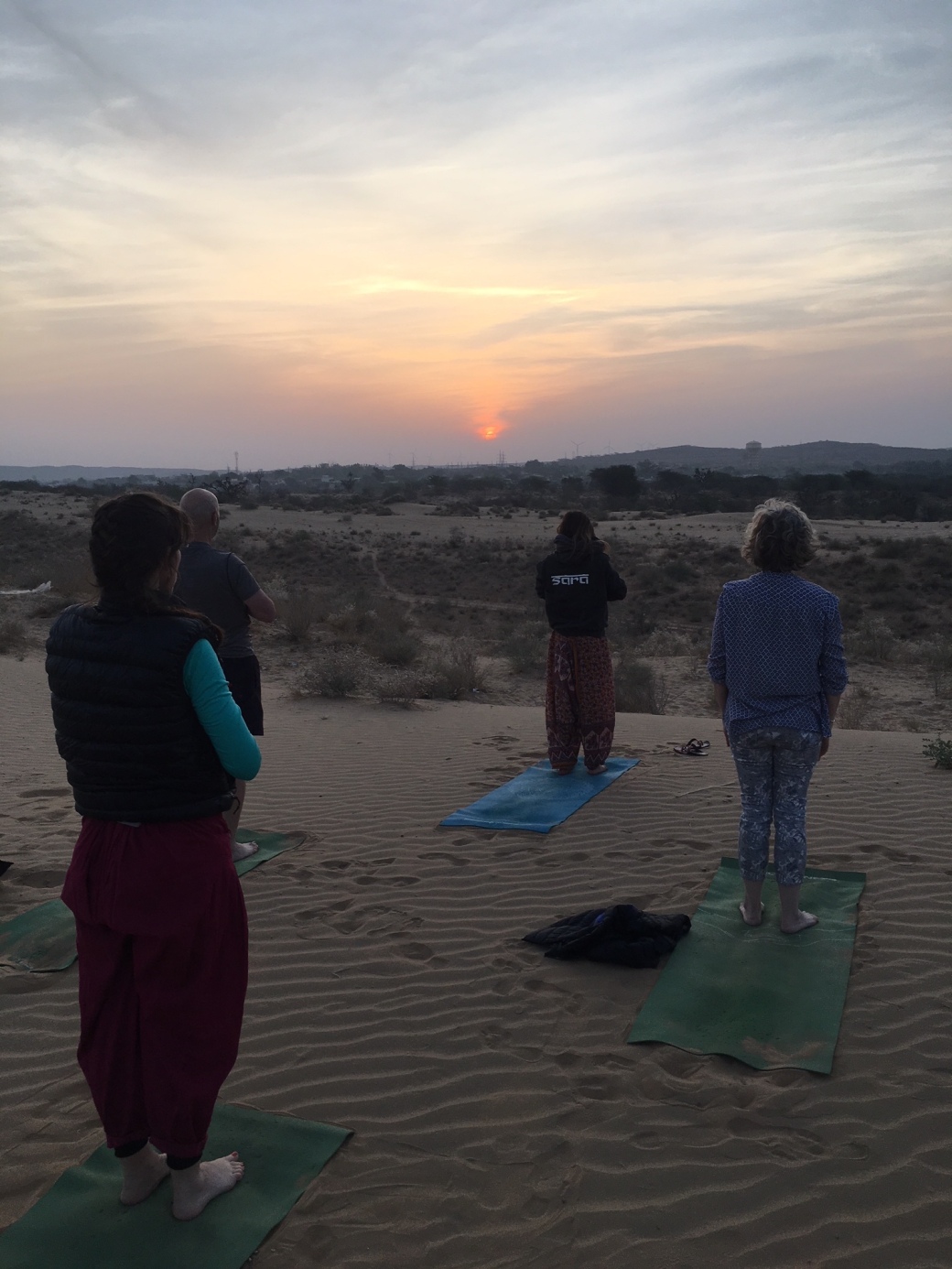 In the morning we gathered in the 6:30 a.m. cold dark for yoga on a high desert dune…our timing was perfect! We were rewarded for getting out of our glamorous tents early with rounds of Surya Namaskara (Sun Salutations) happening simultaneously with the rise of a rich orange sun. 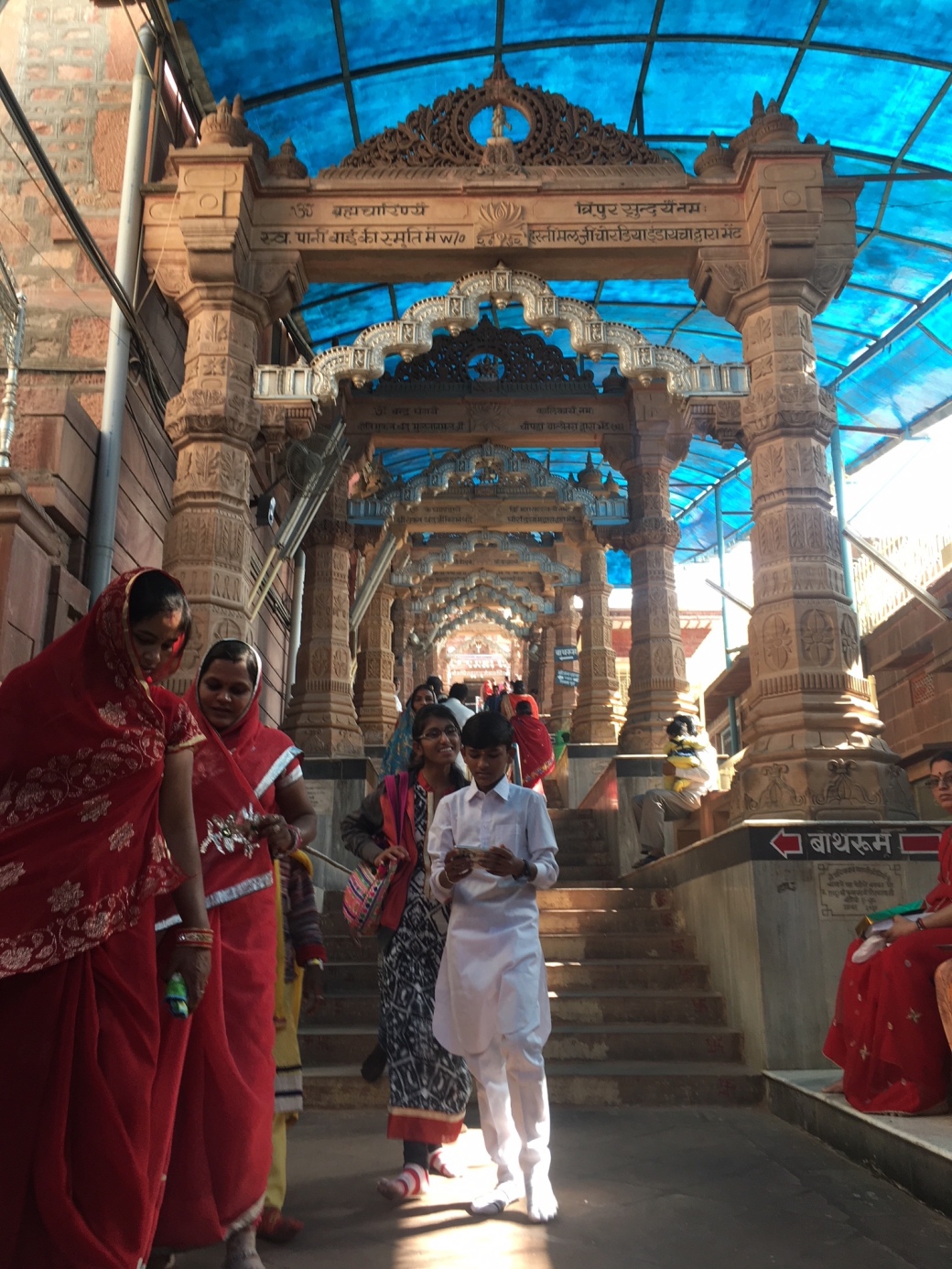 Our next stop was the famous Sachiya Mata Temple in Osian, built during the 9th and 10th centuries.  A series of magnificently sculpted arches forms the entrance of the temple complex.

The main chamber enshrines an idol of the presiding deity, Sachiya Mata along with images of other Hindu deities. Two separate temples dedicated to Hindu Goddess Chandi and Goddess Amba Mata are also built within the complex. 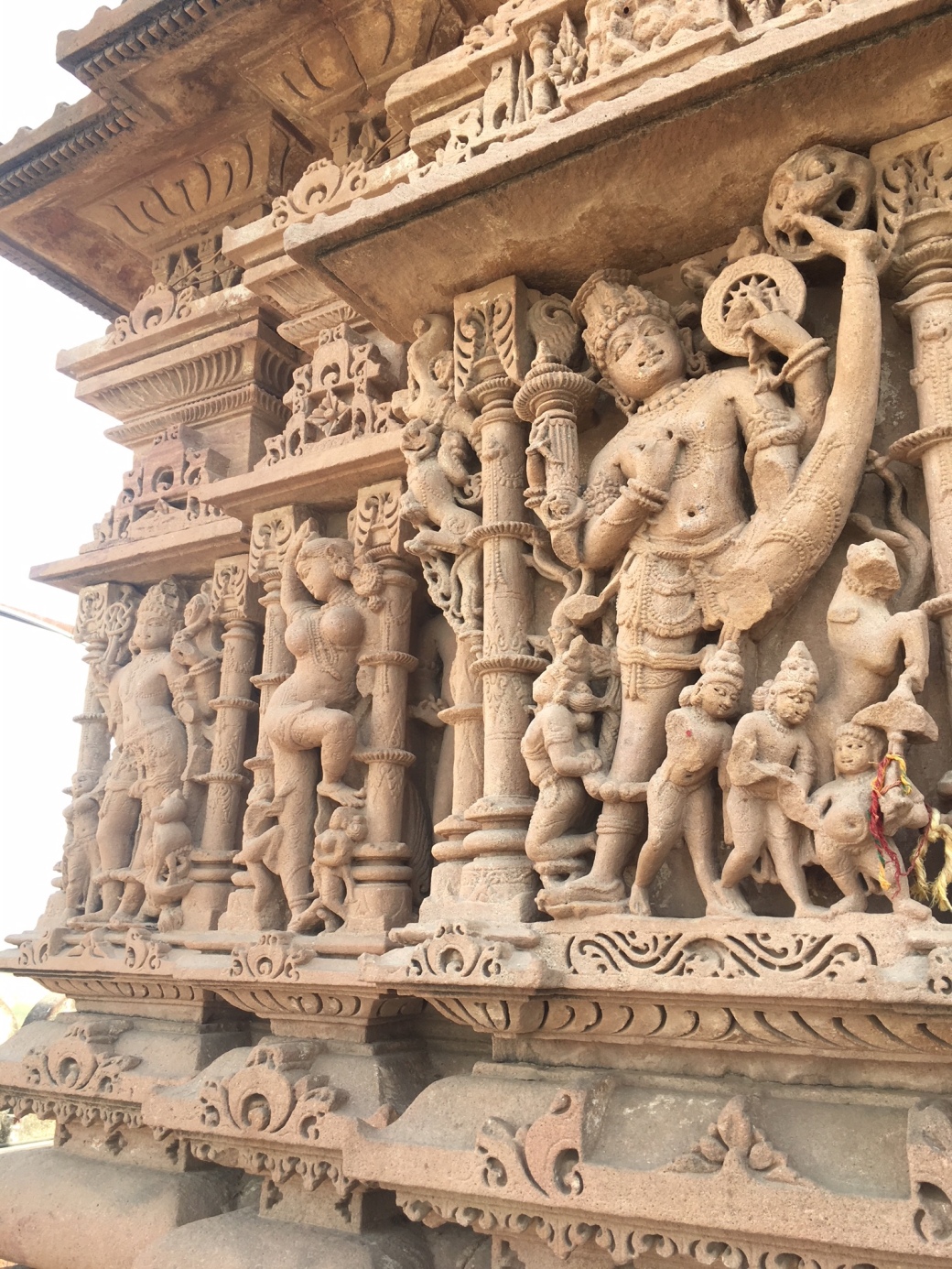 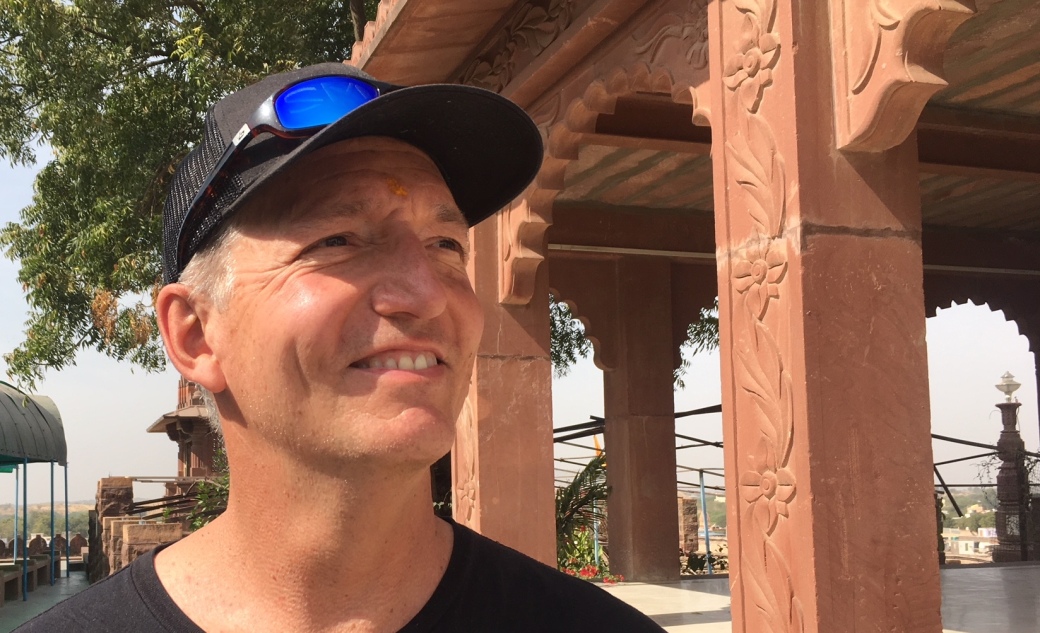 In India, people who walk a spiritual path choose orange as their color. Inside the Sachiya Mata Temple a man paints an orange/ochre colored dot on your forehead where the third eye – the chakra of knowing or enlightenment – exists. The color positioned there reflects your spiritual state. 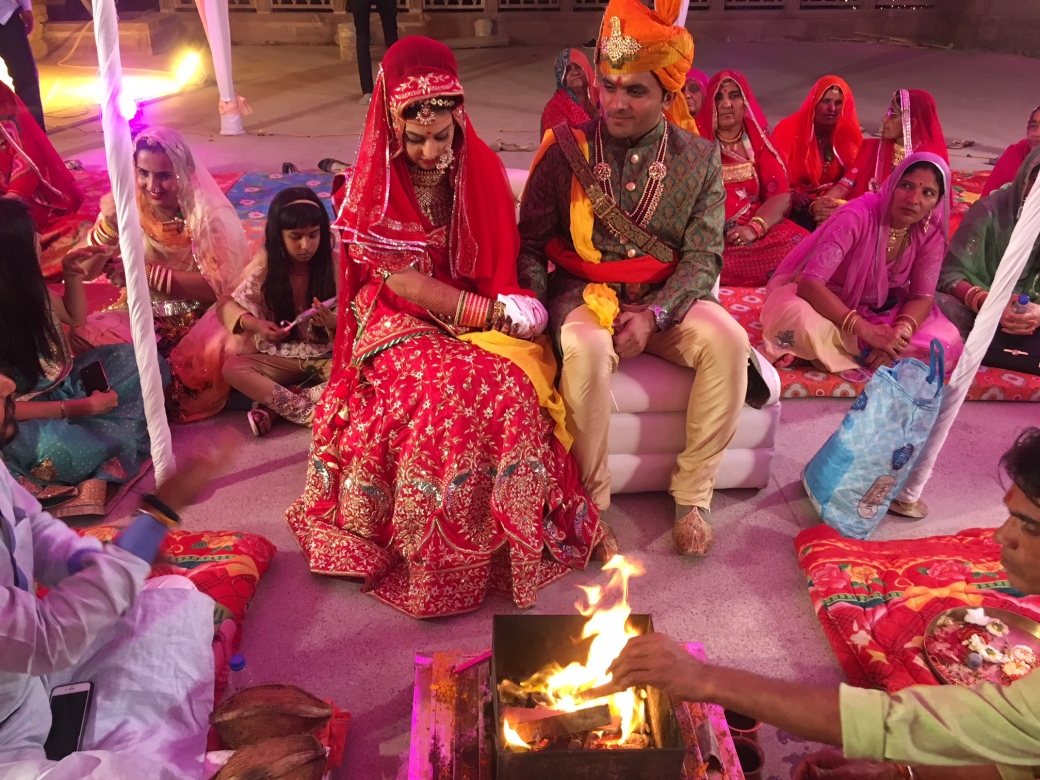 The second evening of our 36 hours featured a wedding, my first to attend in India. I was very honored to be there. I’ve heard a lot about the majesty and importance of weddings here. I now know what everyone was talking about!

I first saw the bride and groom at the Saptapadi. I wanted to take a photo, but didn’t know if that was allowed. As fate would have it, among the large numbers of people in attendance one of the first I met was the mother of the bride. She insisted that after taking off my shoes I should walk right through the crowds sitting on pillows and get up close for photos. Anywhere in the world, what Mom says goes.

During the Saptapadi bride and the groom revolve around the sacred fire seven times, speaking one of the seven vows of their wedding each time.

Next I was ushered down on the lawn where lights glittered through the trees and tables were arranged for the guests.

A vast number of culinary stations circled the grounds under the stars of a 70-something degree, calm and pleasant February night. With plate in hand I walked here and there, putting a little of many foods on. Back at the table it was pointed out to me I seemed to have found the hottest delicacies available. In this land of peppers and spices that was saying something. Spicy my meal was indeed…but oh so good. Plus there were many fantastic dessert options, so I sort of rounded things out appropriately. 🙂 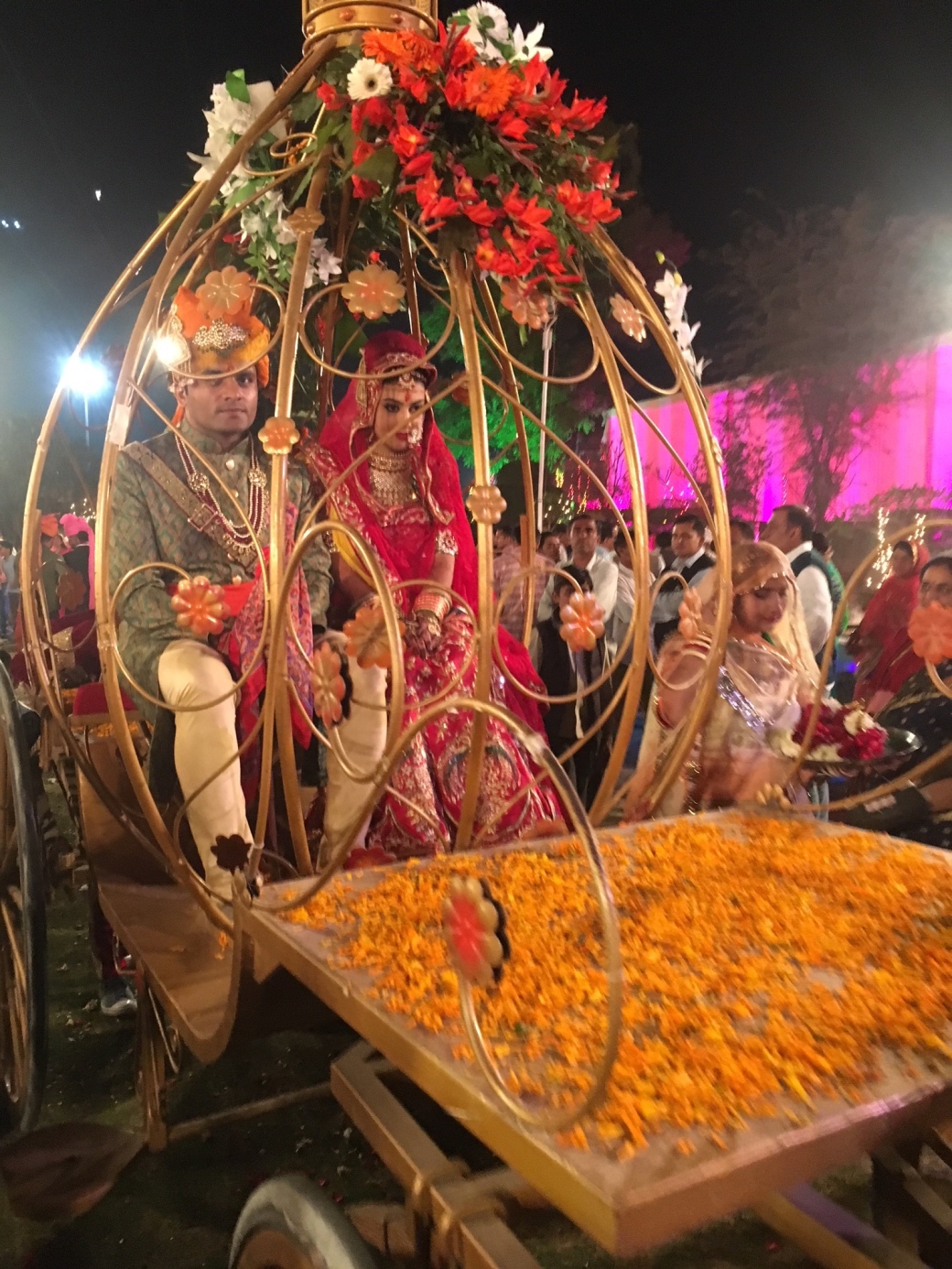 The bride and groom arrived in this golden, flower encased carriage…

…the parade crossed the vast grounds… 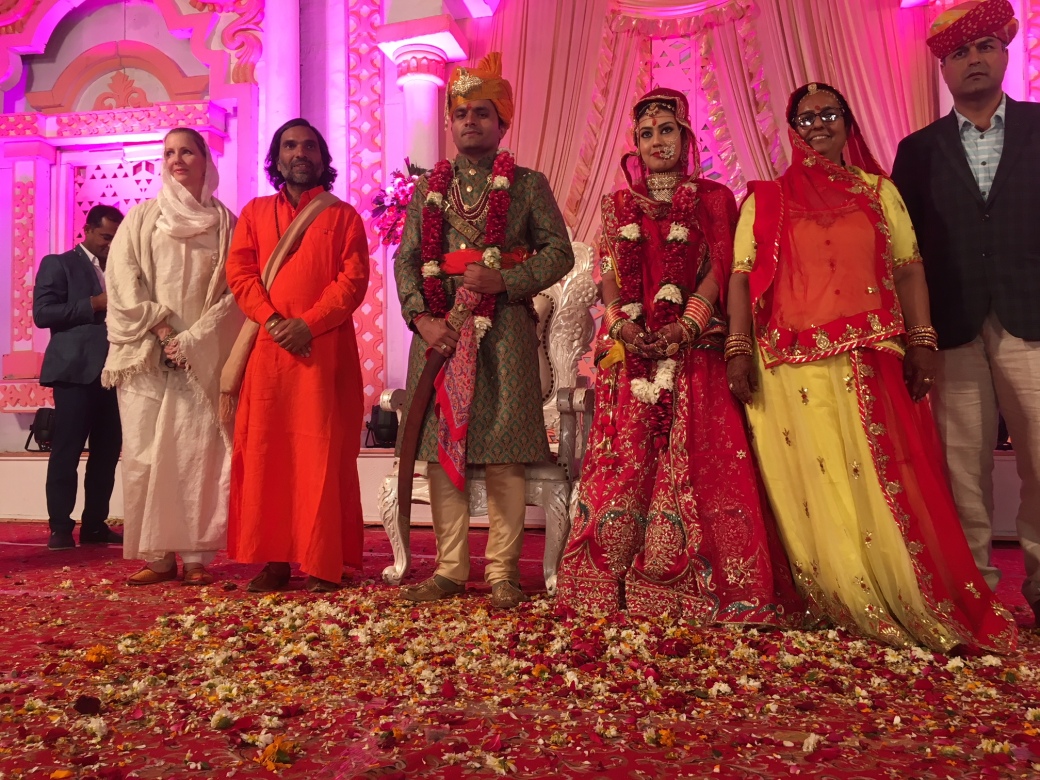 …ending at a flower petal covered stage for photography sessions, one of which included on the left Shreejan Sita and Surajnath Siddh from our Shri Jasnath Asan yoga center.

On this night, for all guests to photograph and admire, a new groom with glowing bride sat royally perfect in Rajasthan, the Land of Kings…and Queens!

One thought on “36 Hours in Rajasthan: Camels, Glamping and one very Amazing Wedding.”