Mana eva manusyanam karanam bandha moksayoho (As the mind, so the person; bondage or liberation is in your own mind).

The Rasjathan town of Nagaur lies about midway between the bustling cities of Jogphur and Bikaner. Therefore it is not too far from Shri Jasnath Asan, the yoga center I am now at in a 16th century medieval fort built by the King of Udaipur.

There is so much in this neighborhood in India! Where to begin? The photo above shows Nagaur Fort, a site that has witnessed many battles and owners since being built in the 12th century. I spent a few hours walking through it on a recent afternoon.

What a vast series of structures, gardens, pools, rooms and walkways…and still under renovation as this photo of women digging and moving rocks under the midday sun shows (below). 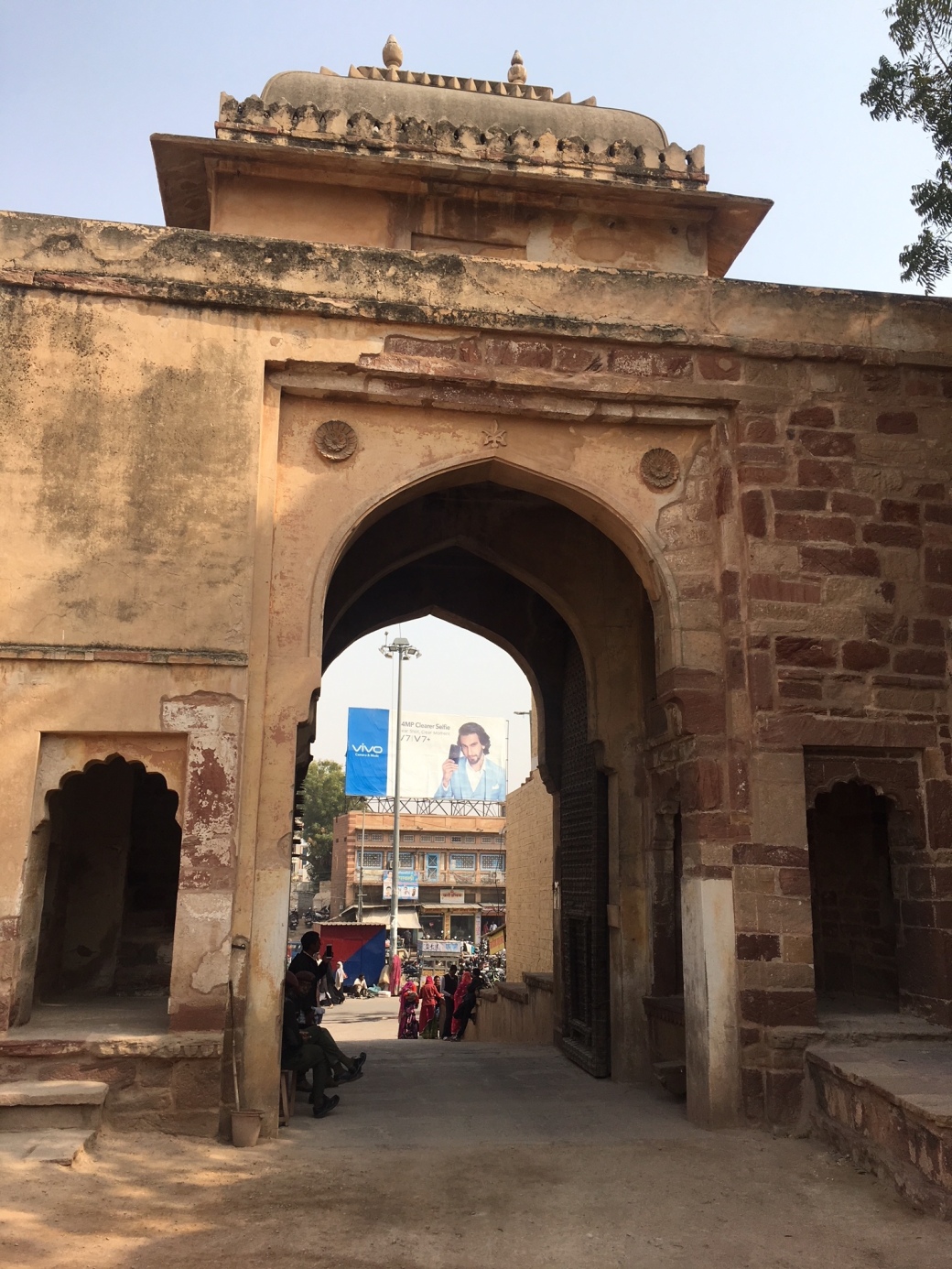 Right outside the ancient insides of Nagaur Fort lies today’s traffic where we hopped in a “tuk tuk” – an auto rickshaw of sorts which was started like a lawn mower – for a short ride to the old part of Nagaur City where an array of market alleyways can be walked. 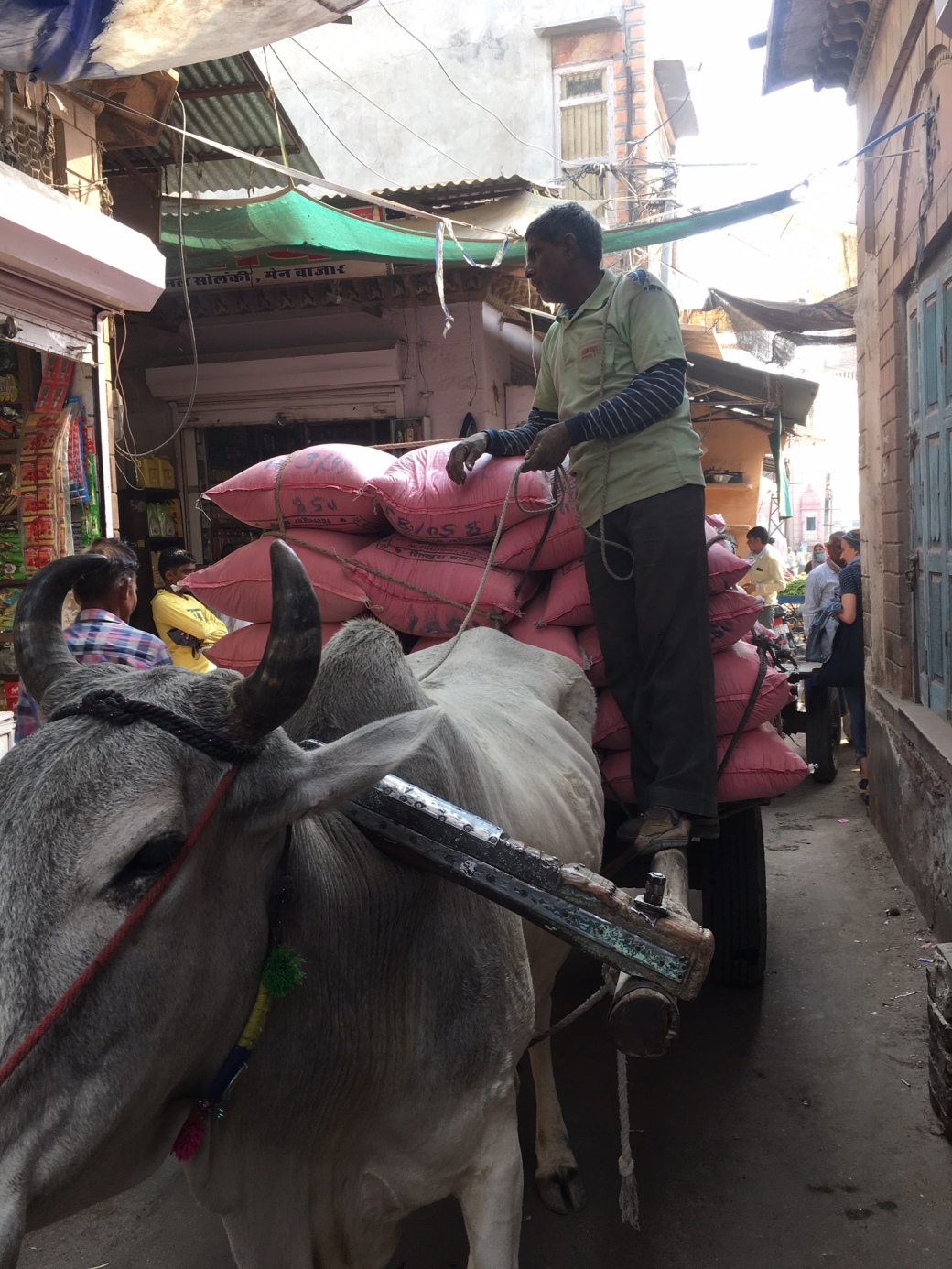 Super cheap, a tuk tuk takes one where they want to go…loud yet efficient in traffic! But be careful walking in the alleys. One never knows what comes from the opposite direction, such as this loaded wagon squeezing through.

What else to enjoy near Shri Jasnath Asan? How about a camel and horse trading fair complete with a “longest mustache” contest?

I can’t compete in a mustache contest because, well, I don’t have one, but I have noticed how most men around here are extremely well groomed. To fit in, I decided to walk to our local village barbershop and get a haircut. It was the best 100 rupees ($1.57) I’ve ever spent. The barber even shaved my neck with a straight razor and rubbed in a special sweet scented oil. It gave me a rash for a couple of hours afterwards but that’s okay, I think I look “sharp” and many people smile big when they see me :-).

Also this week was Republic Day, honoring the date on which the Constitution of India came into effect on  January 26, 1950. All over the country were parades and other celebrations, especially in the schools. I was thrilled to be invited to the local school for the holiday observances. It’s located just a short walk from Shri Jasnath Asan and the Republic Day assembly took place outside, in front of the school entrances. It was an incredibly well organized event featuring not only passionate speeches but dancing, singing, marching through the desert sand and more by the several hundred uniformed students. Really impressive!

Imagine my surprise when I was called out of the audience to come up to the microphone and say a few words. It was indeed a special honor to say thank you to everyone with my sincerest “Namaste” to conclude. 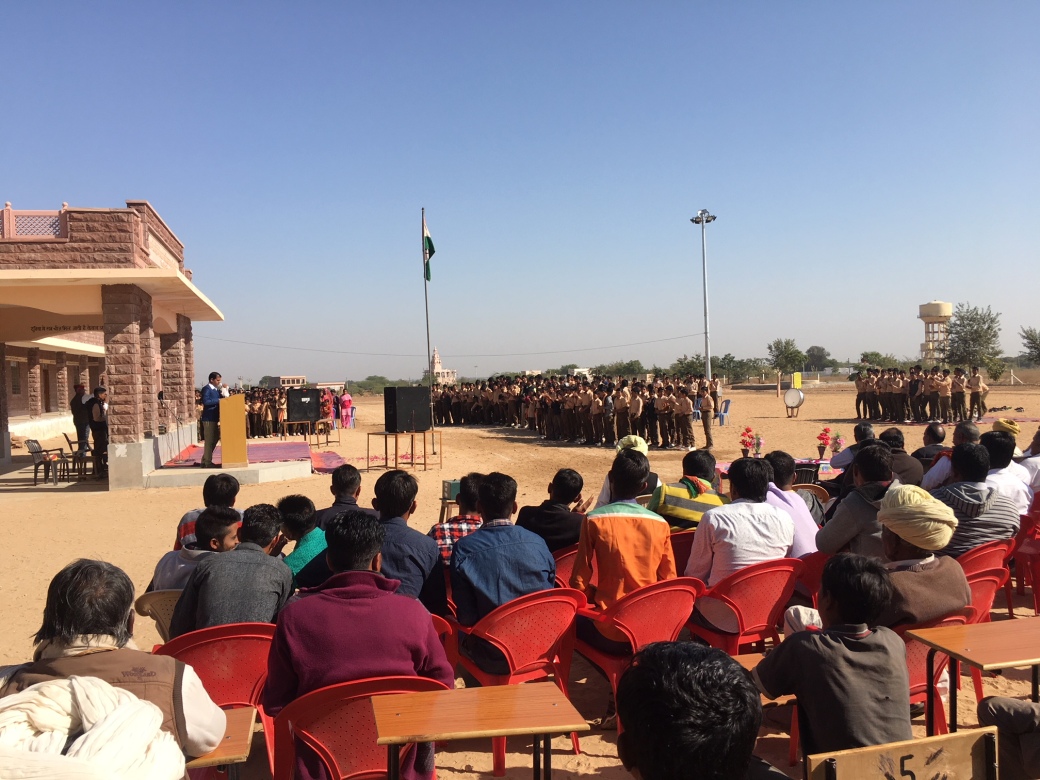 We also have the village of Khimsar about nine kilometers away. Kapil (a worker at our Asan) and I took a motorcycle ride there during the late afternoon to pick up some fruit at their market. Driving the narrow roads offers a sort of game of chicken when a car or truck approaches from the opposite direction. The road isn’t wide enough for two vehicles and no one really wants to be the one to hop off the asphalt and go about four inches down into the desert sand. So there’s horn beeping and flashing lights until the smaller driver relents and gives room.

Here is Kapil (above) who pulled over on the road to and from Khimsar because I asked him to. I wanted to photograph the amazing desert sky at dusk.

Welcome to Khimsar! Here’s a fruit and vegetable merchant (below) who asked I take his picture. I’ve learned that selfie and general picture requests happen often with me and that’s a good thing. It’s a first step in making friends.

And then back at Shri Jasnath Asan in the evening we often gather for Puja (Worship Service). It’s a time when everyone sits behind the drummer and other young men clinging small cymbals or blowing into shells (which makes a very cool sound). Three to four songs are performed while fires are lit at the altars. 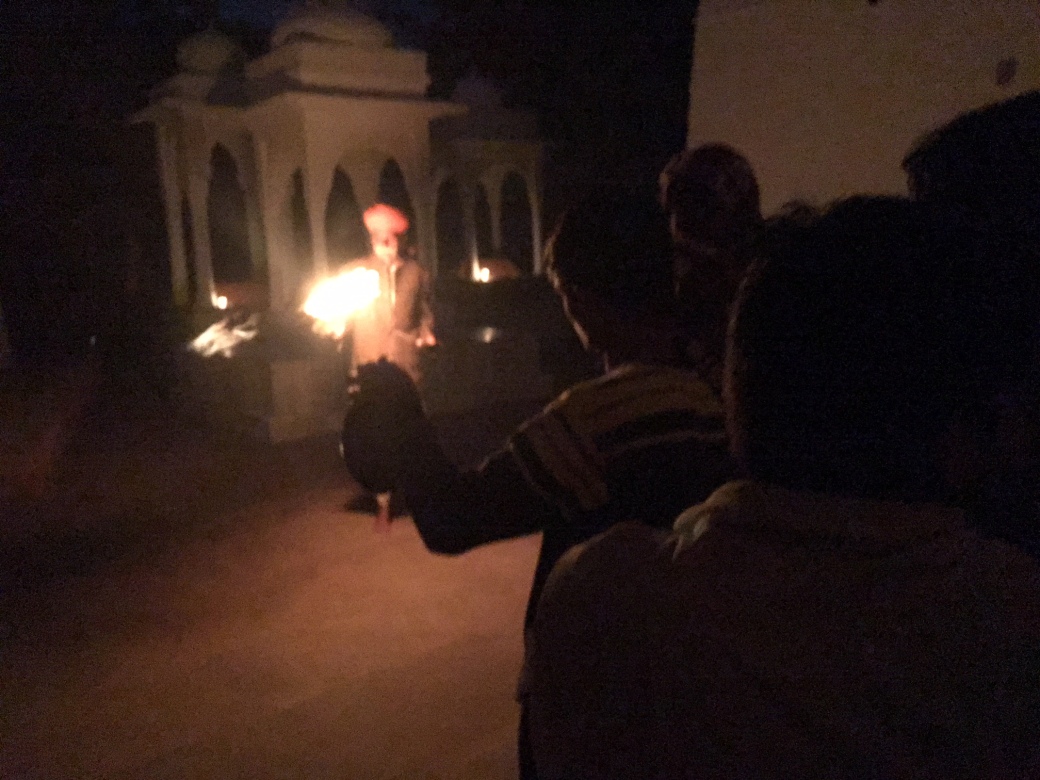 For a few days we had visitors from England staying with us. Alex, Alice and Elle actually drove here in this Land Cruiser (below)! Nine months so far on the road. They loved the music from Puja so much they recorded it and are probably now listening to it on their way to Nepal. Check out their journey here. 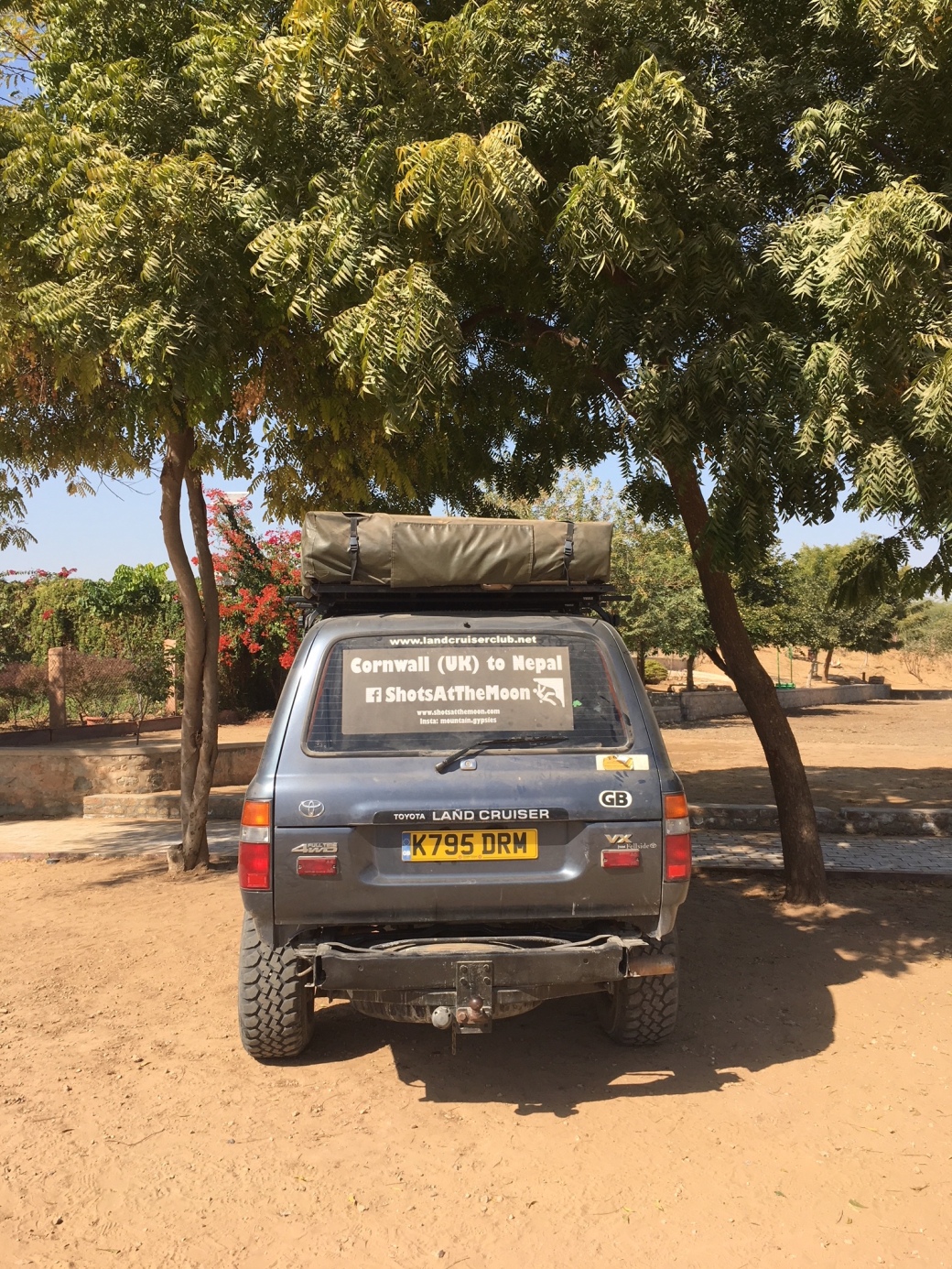 After dinner it’s generally quiet and bedtime comes early because yoga starts in the morning at 6:30 a.m. From dinner it’s a remarkable walk back to where I stay because I’ve never seen stars coming out quite like here in this desert locale. Plus, the moon easily lights my way.

The library at Shri Jasnath Asan offers many amazing books so evening’s quiet provides an ideal time for reading. I just finished another translation and commentary on The Yoga Sutras of Patanjali. Written anywhere from 5,000 B.C. to 300 A.D., these Sutras are considered the basis for all yoga flourishing today including not only the poses (a primary focus in the West), but our thoughts and mental attitude (more so here in the East), which I’m learning more on. That’s where I found the Sanskrit quote starting this blog post which struck me as more important among my friends these days than ever before.

Shri Jasnath Asan offers a Yoga Lifestyle Workshop, February 1-10. This workshop focuses on the belief that perfect health is possible!  Days will be filled with:

I’ll be participating in the Yoga Lifestyle Workshop, so my next blog post here will include photos and reports. Let me know what you think!

8 thoughts on “Our Neighborhood in India”