I don’t know which is more stunning to experience, the sunsets or sunrises in South West France. Or a Beatles 50th Anniversary Sergeant Pepper’s Lonely Hearts Club Band concert at the Royal Albert Hall in London. Or how ’bout all of the above. 🙂 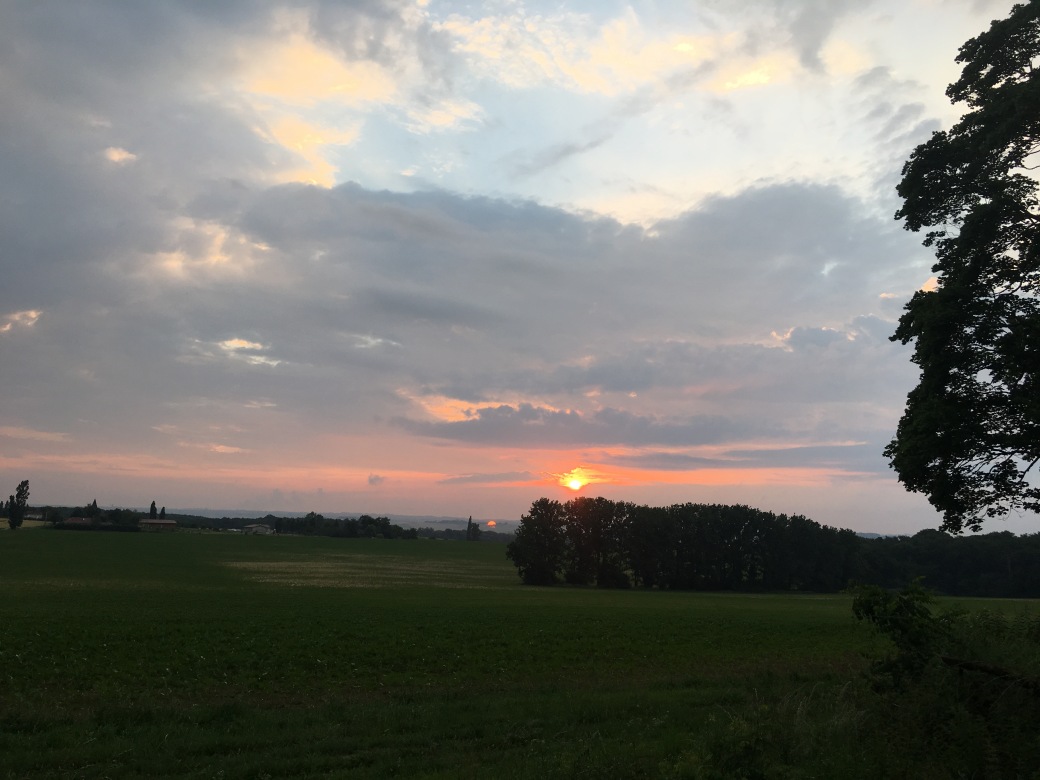 After enjoying the month of May at the Lamothe Castle and Farm yoga retreat renovation, I awoke early on my last day to this remarkable dawn. Celeste, a member of our team from Australia, took over the morning yoga lead and presented a beautiful class. When I opened my eyes after Shavasana I saw that she had placed by me an envelope of hand written goodbye notes from everyone on the team. I’m still overwhelmed and will be forever whenever I read again or even think about these kind letters. 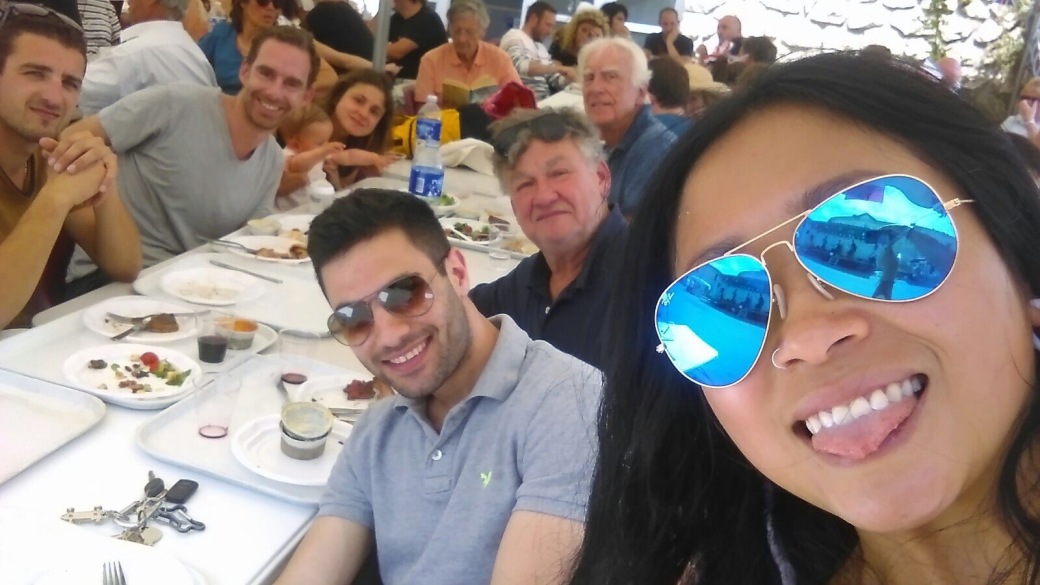 How fitting that my last days in France included our team attending a festival celebrating  England in the nearby village of Saint-Puy, in that London shows up as my next destination on this Yoga World tour. 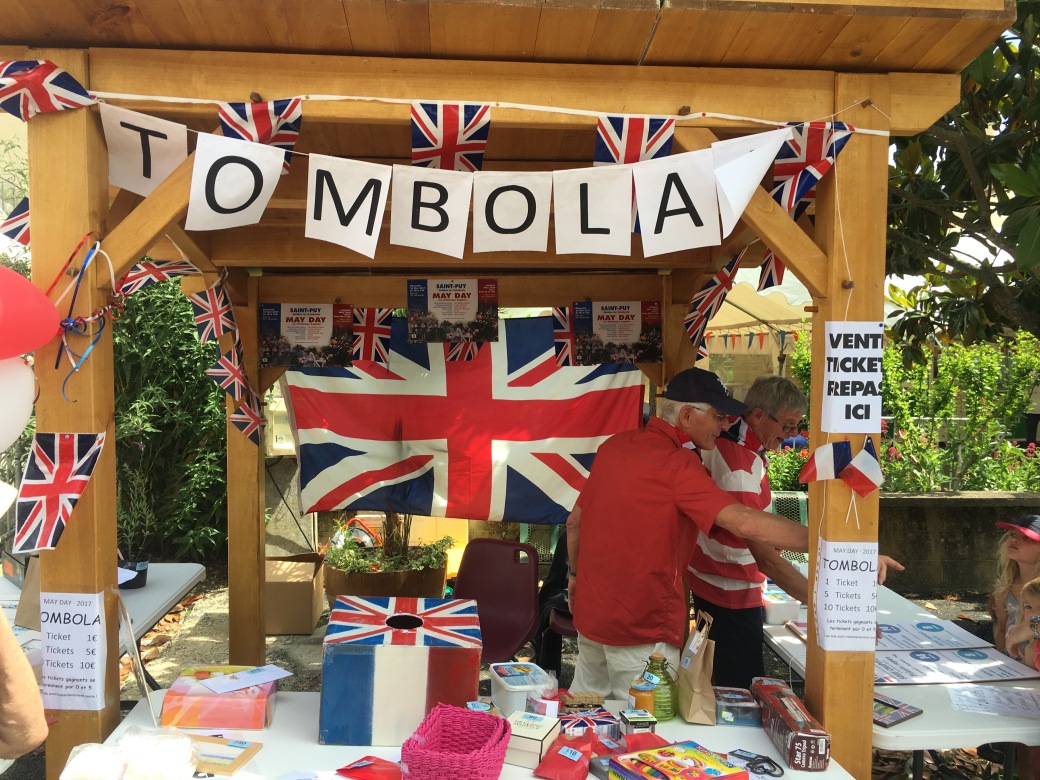 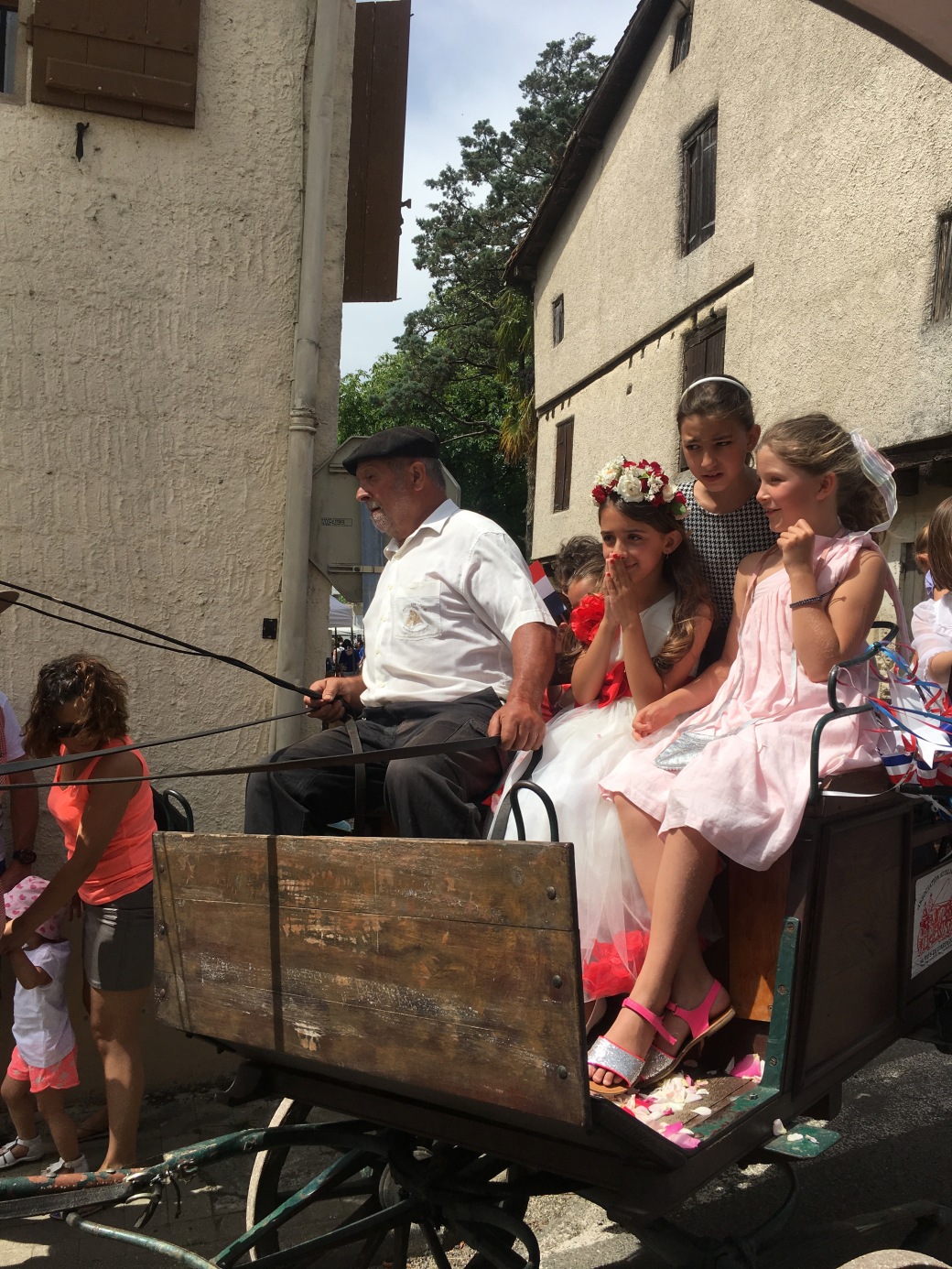 So I got to get an advanced lunch of fish and chips while listening to some Adele covers by an excellent local band. Even a bagpipe club was on hand, marching down the narrow streets of the quaint French village, working hard in some very warm sunshine. 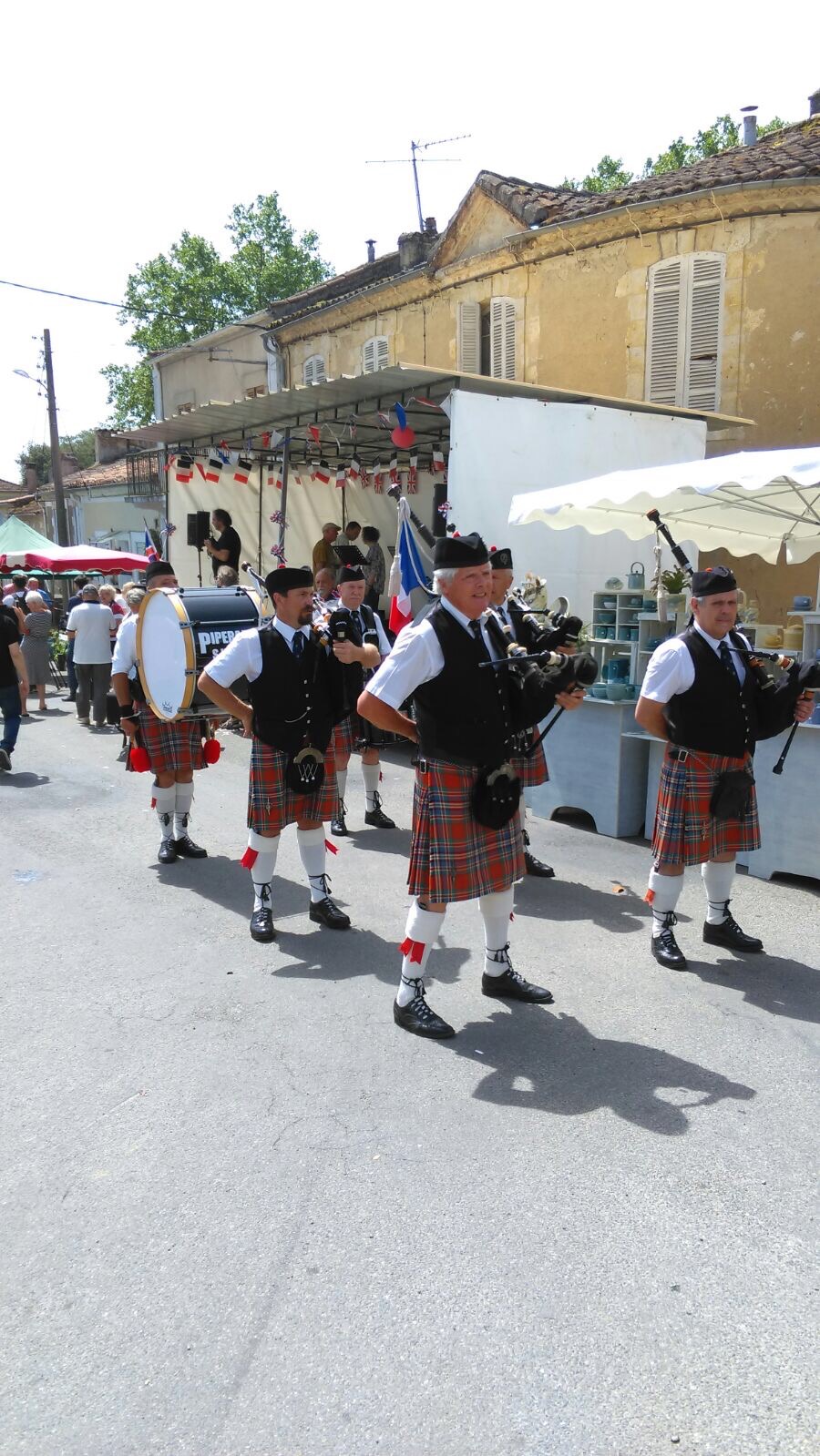 While much of the renovations during May were inside the Lamothe Castle, my final projects before departure included expansion of the garden out back and some big planting around the grounds in general. 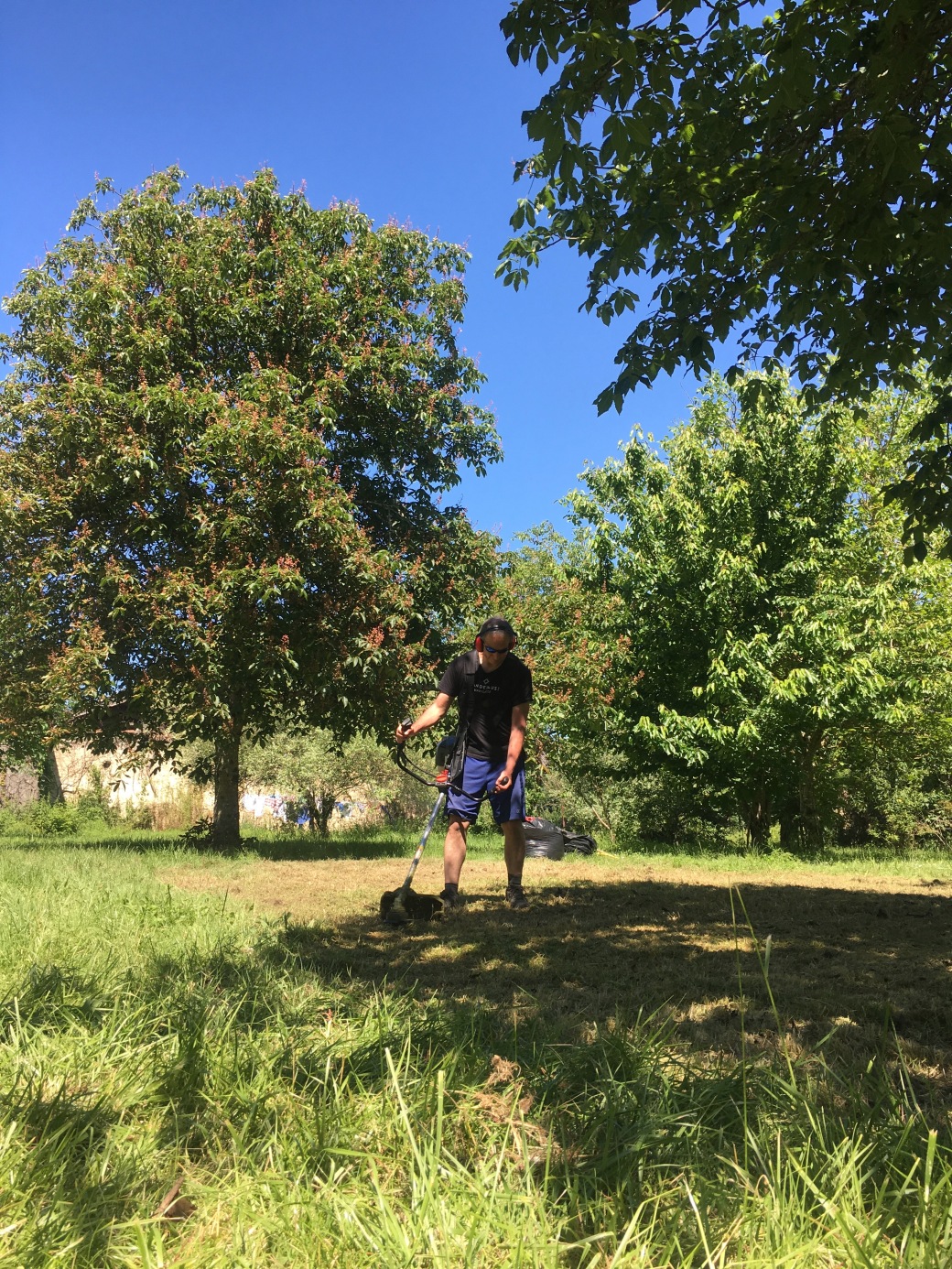 First we had to weed whack the area, and then August, a very cool neighbor came over to show us how to correctly roto till the soil. Let me add that August is in his 70’s. Chewing on a toothpick all afternoon, he works harder than everyone while making chewing up the hard French Sud-Ouest ground look easy. Dude’s my hero. In this photo below fellow Frenchman Michele looks on in awe. Michele is in his 70’s as well and has broken ribs yet also took a turn with the rototiller. These French guys are tough. 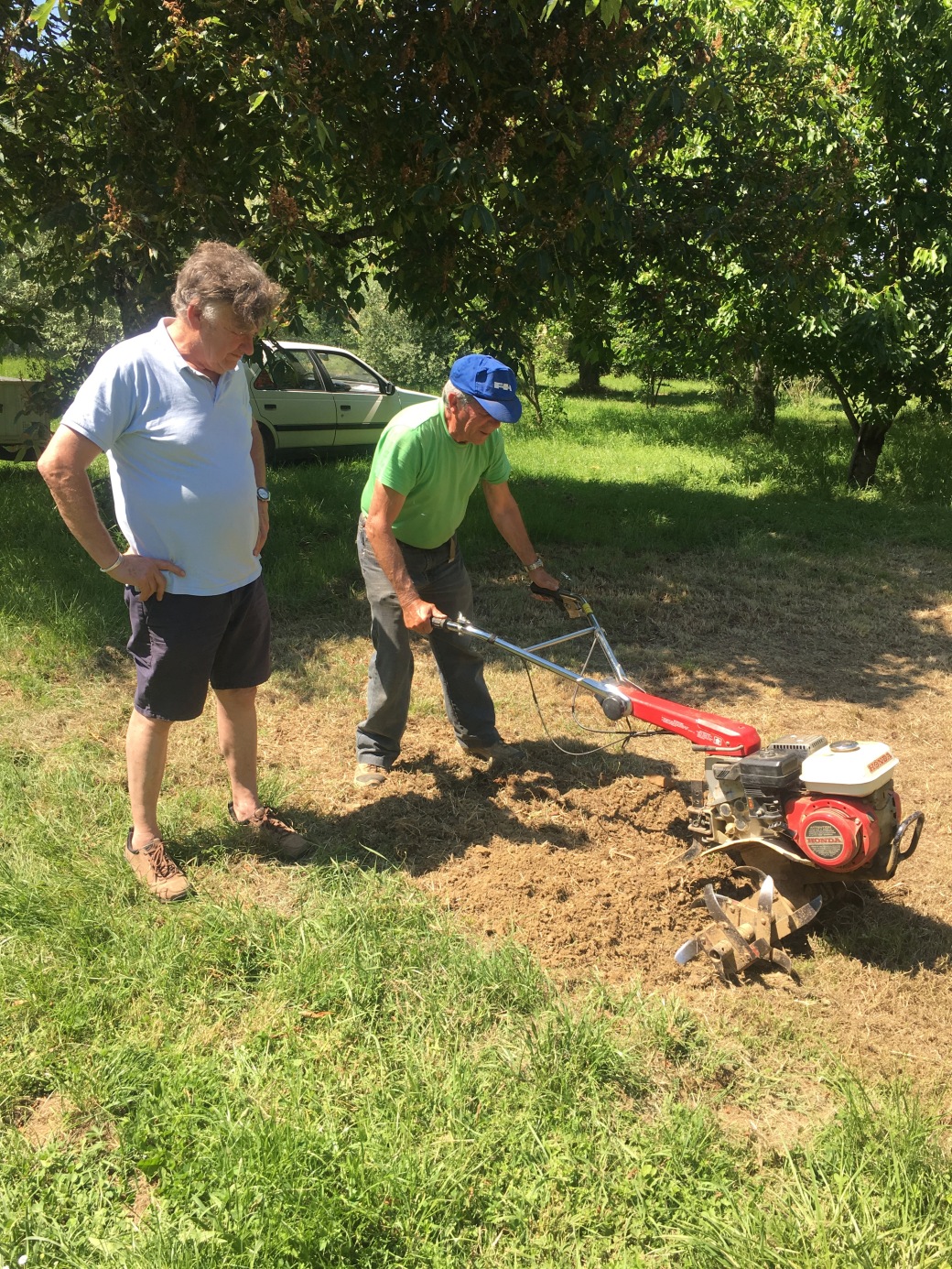 And then, voila! We have a big garden with primarily rows of tomatoes, but also peppers and zucchini planted. Actually, lots of the latter. Come harvest time there will be many zucchini recipes needed. Zucchini bread, anyone? 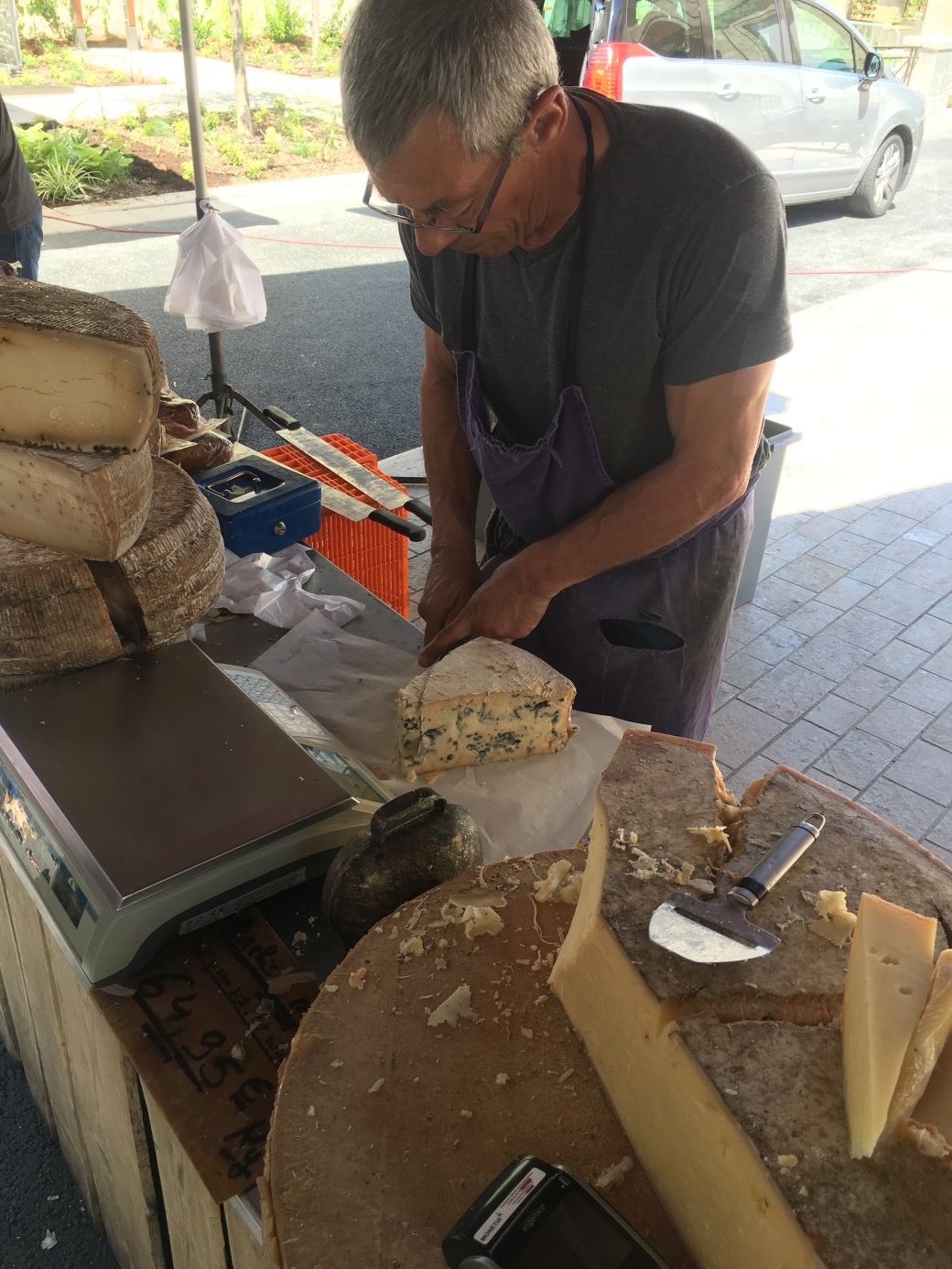 We bought the plants at the local market in Lectoure, but of course while there we also had to get some cheese and other good things for the en plein air lunches and dinners. 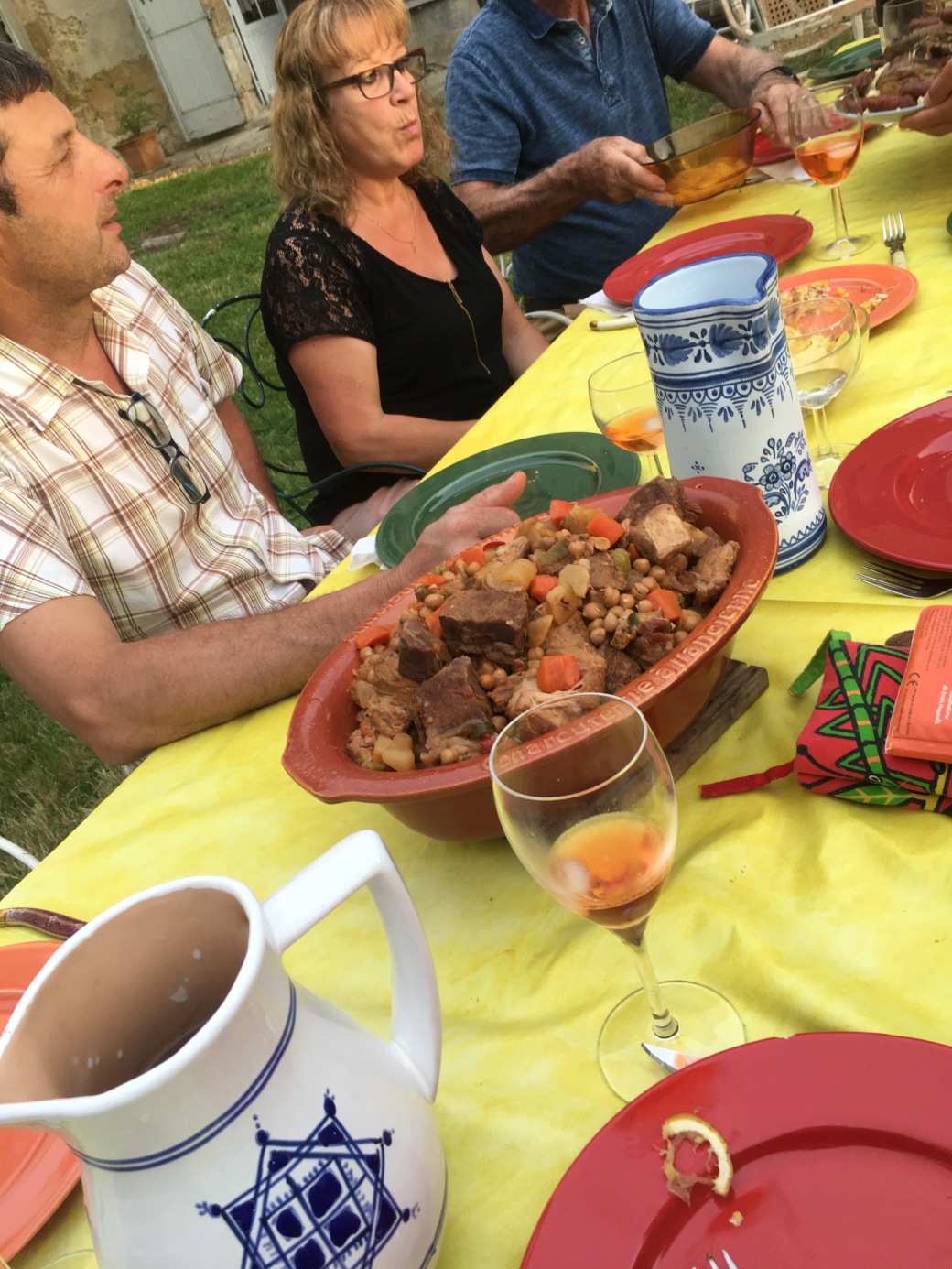 We had many of the the wonderful neighbors join us for dinner during my last few days at Lamouthe Castle and Farm. They would also bring tremendous food and wine so these meals were fantastic. 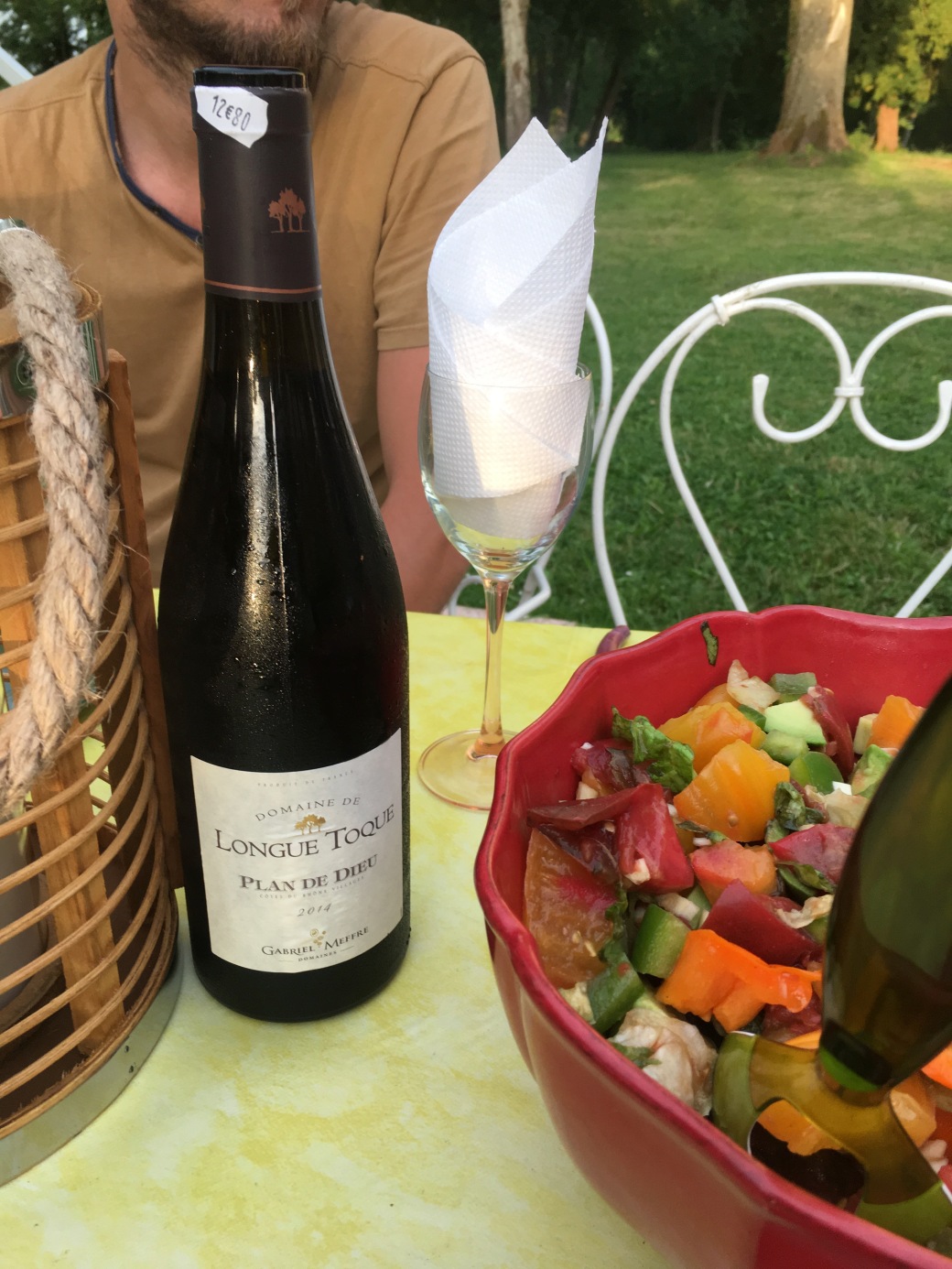 One evening the local mayor and his lovely family joined us for dinner. I was so honored to cook that meal. 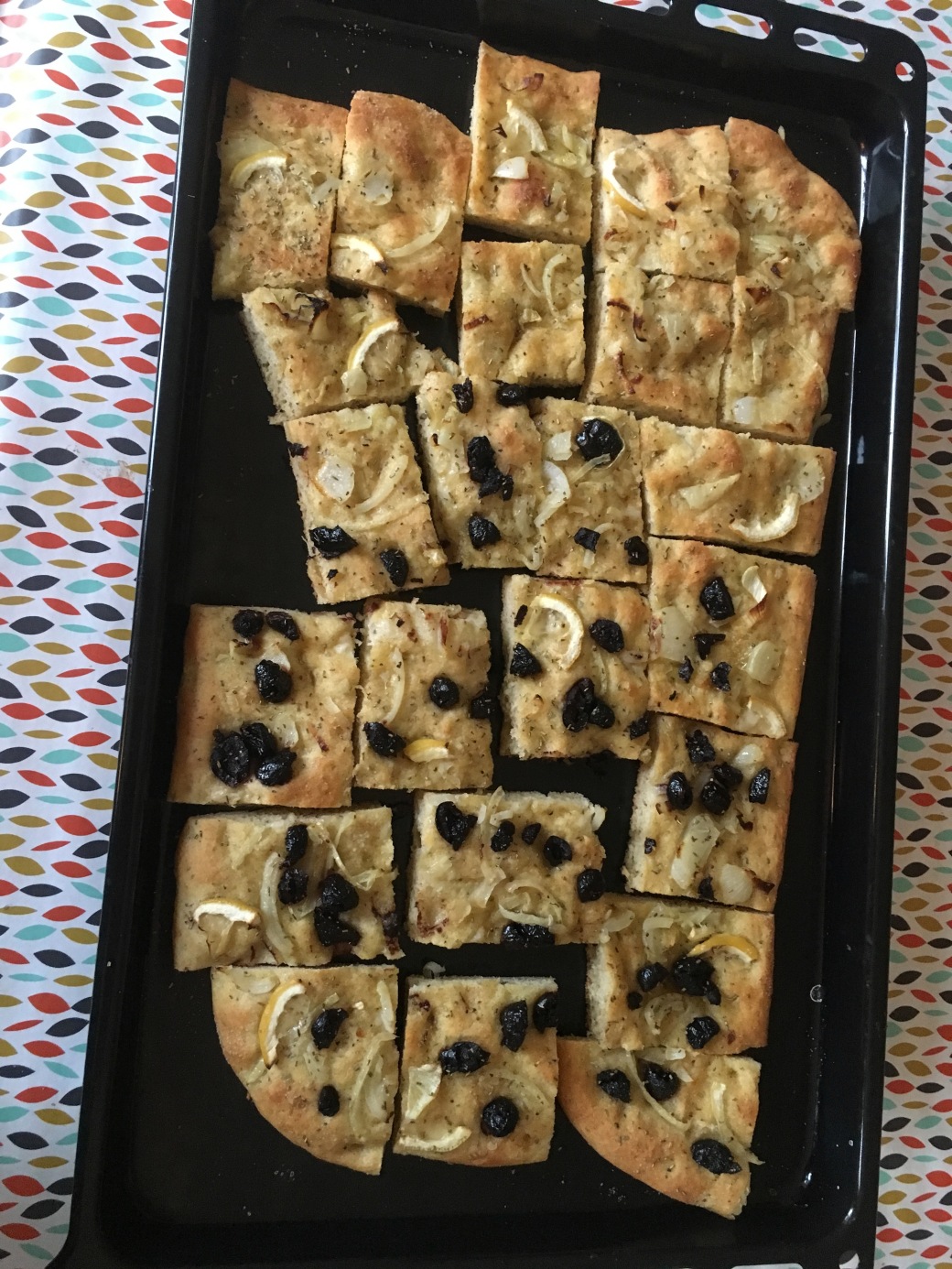 The menu was simple – lemon potatoes, choufleur gratin and a bunch of pork chops and sausages from nearby Toulouse (15 people around the table) I grilled in the living room fireplace. As an afterthought I also baked a focaccia. As afterthoughts go, that was a fortuitous one. The mayor’s wife in particular really liked it. I’ve never had a mayor’s wife compliment my cooking before, and in France of all places! Celeste had decorated the long table with an array of candles, which was a good thing. After the meal there was the cheese and salad course, and then desserts and – did I mention the champagne? – so the event went on long past dark. Vive la France! 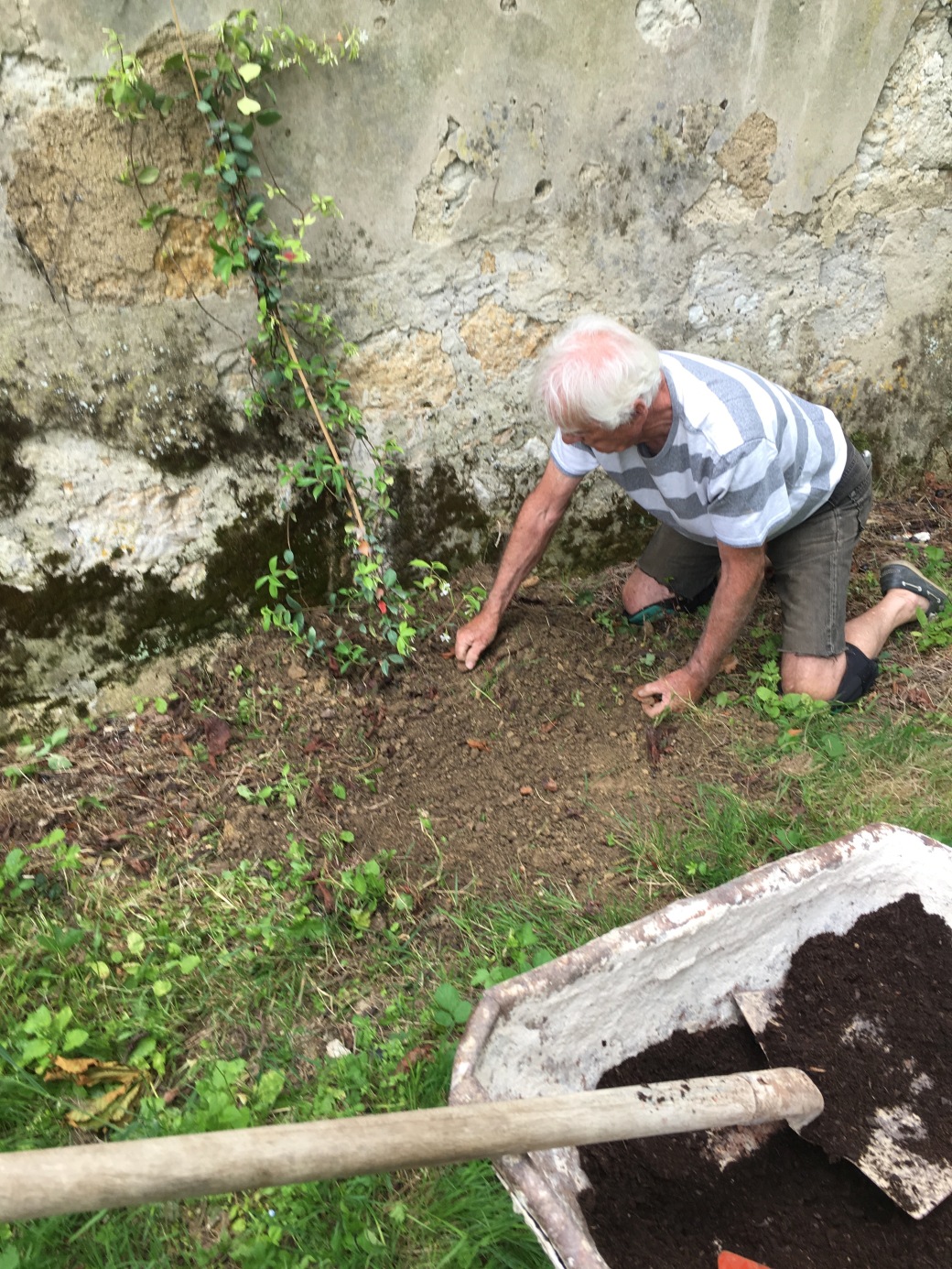 I also had the privilege of planting new trees and flowers on the grounds of the castle with the father of Romain (who along with his wife Capucine own Lamothe Castle and Farm). 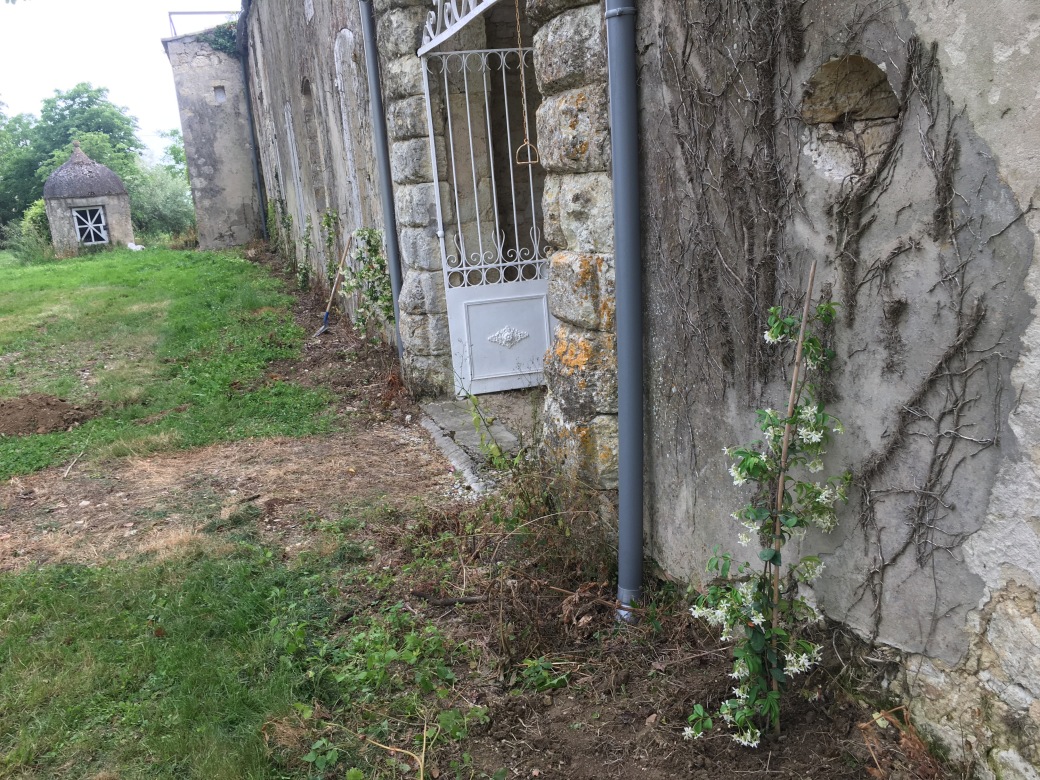 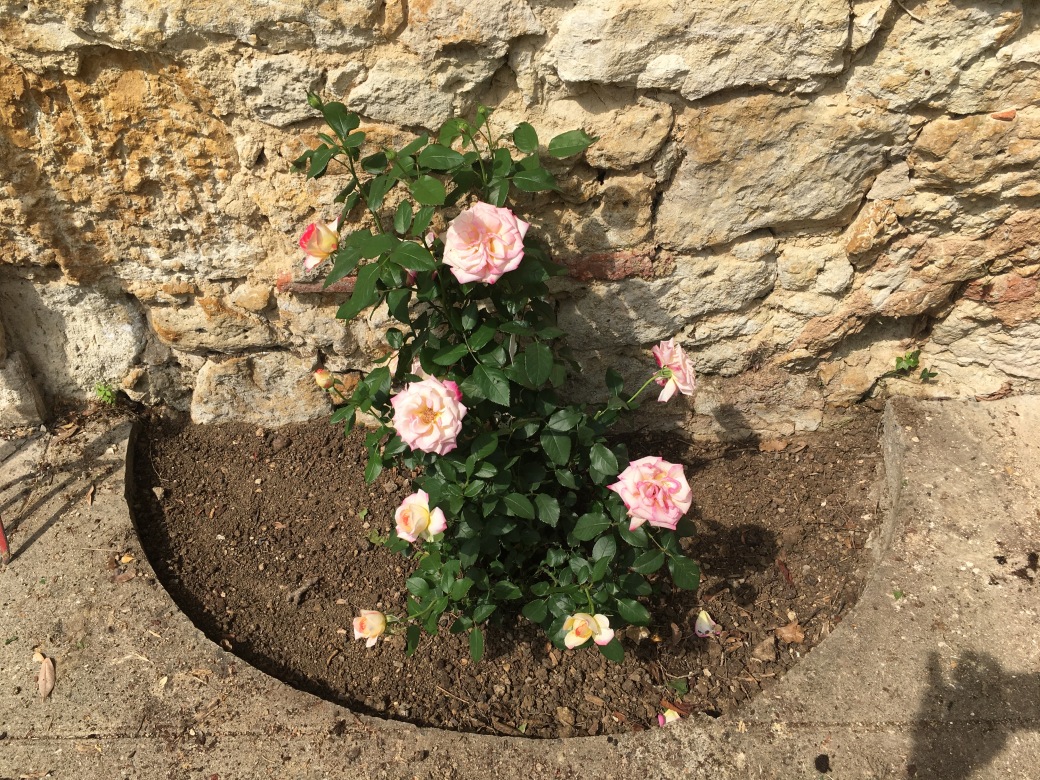 He is also in his 70’s, yet worked from early morning through evening digging and planting. I’m starting to see a common theme here: men who do physical work and drink wine live long, active lives. I need to observe and do the same! 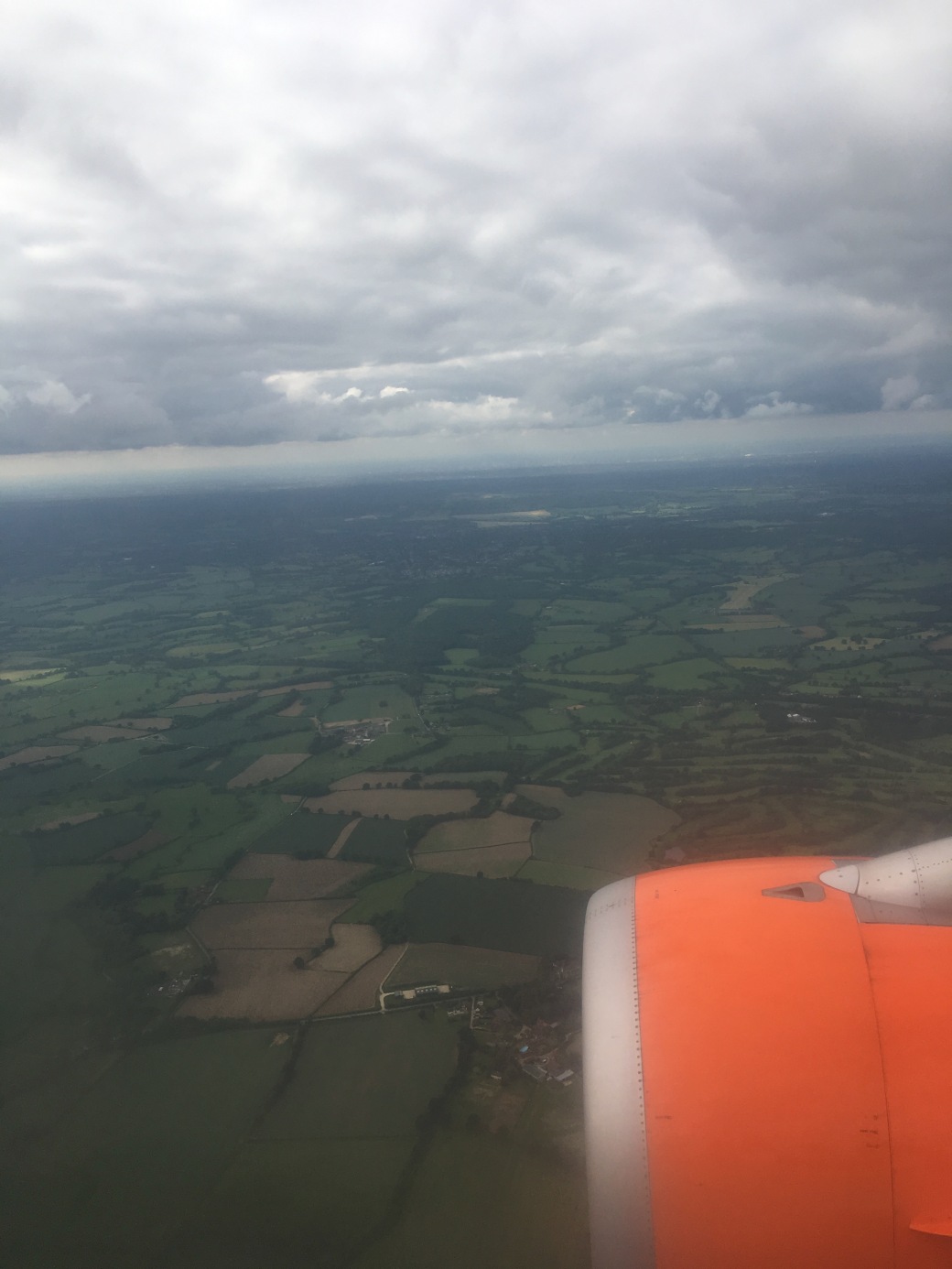 The flight to London departed from Biarritz in the very southwest corner of France. I looked at taking a train or bus and ironically air travel was the cheapest, 60 Euros (and that included the extra I paid to check my big suitcase). I went on Easy Jet and it was indeed an easy flight, skirting the west coast of France and then over the English Channel and the tidy farms of England in no time. 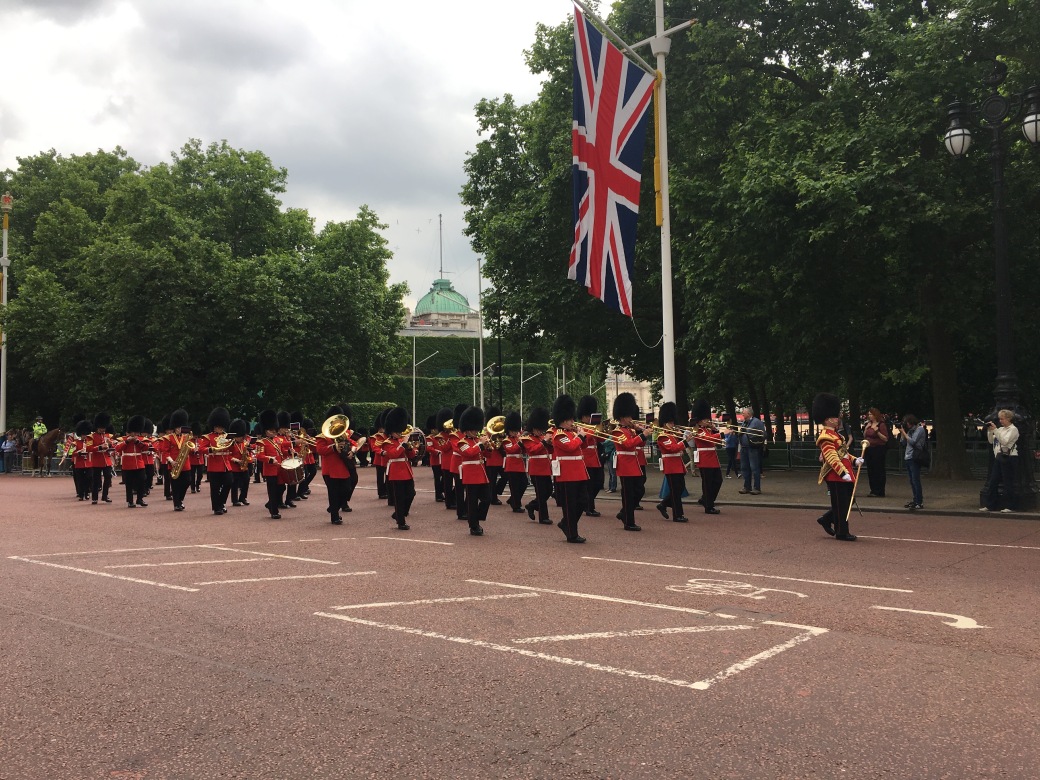 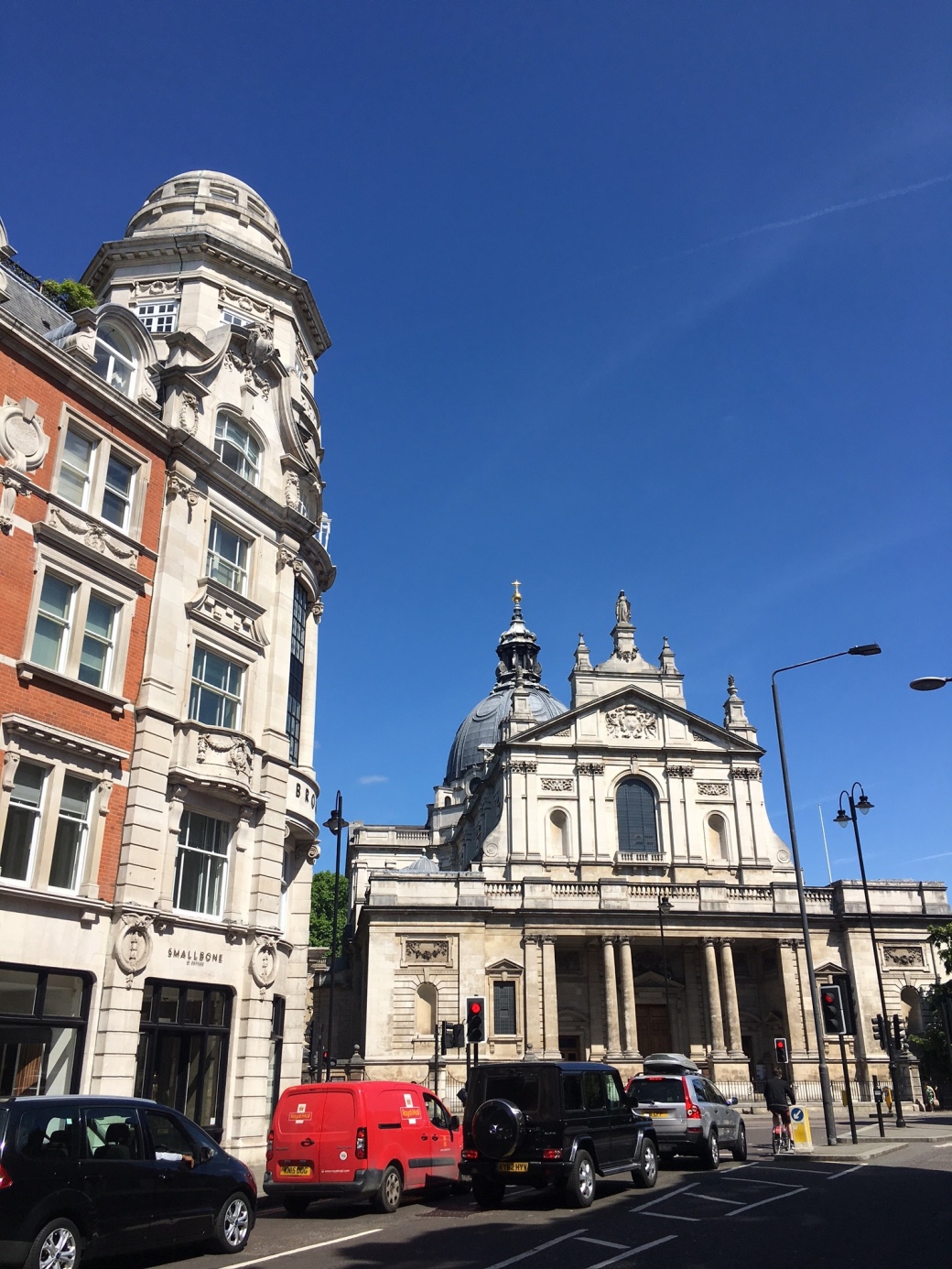 I’m ready for rain in London, but my time here so far has been 70 degrees and mostly sunny. Sort of, well, perfect. To get an immediate look at London’s highlights and history I  took a three hour walking tour with Sandemans. This company provides these tours in most every major European city for – wait for it – free! Of course, at the end you better tip your tour leader. I also took one of their walking tours (and Tapas Tour) while recently in Barcelona. In addition to getting an enthusiastic tour leader who really knows his/her stuff, you meet other tourists from around the world as you happily walk from site to site. Check out the tour details here. 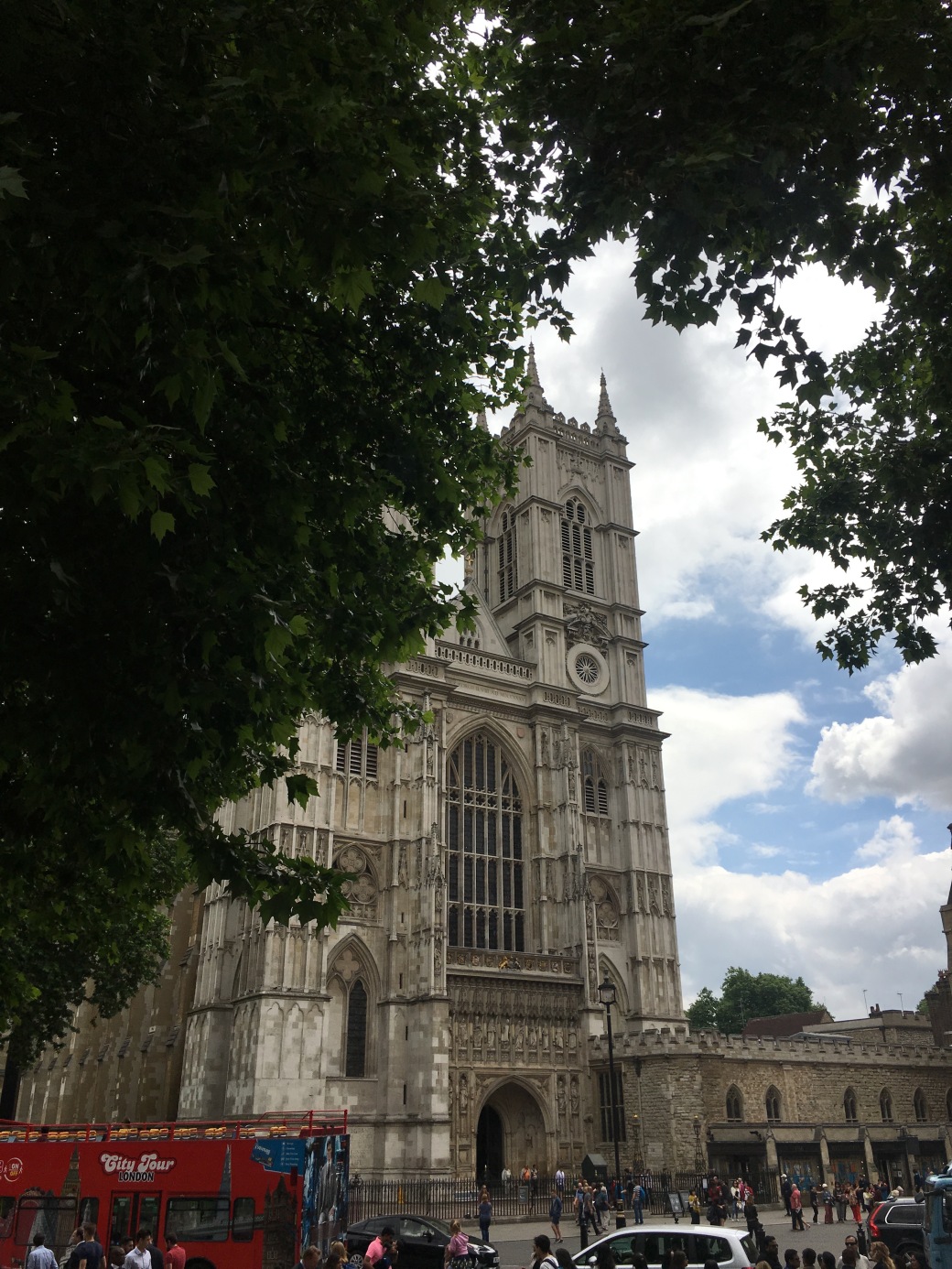 Our tour took us through the Westminster district, home of the Houses of Parliament and Westminster Abbey, where English kings have been coronated since 1066. 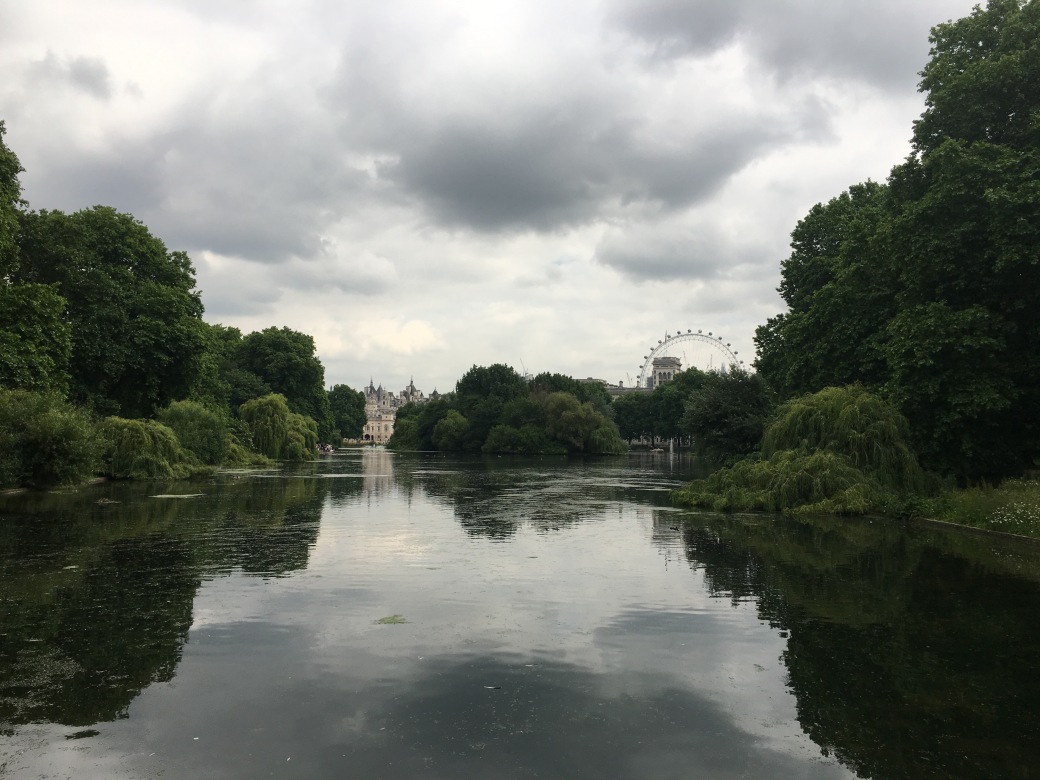 After seeing that the Queen was home but for some odd reason she didn’t come out to say howdy, we also strolled through St. James Park on the way past the Churchill War Rooms ending at Big Ben. Our Tour Leader presented an amazing amount of history, and did some very solid Trump impersonations a few times as well. 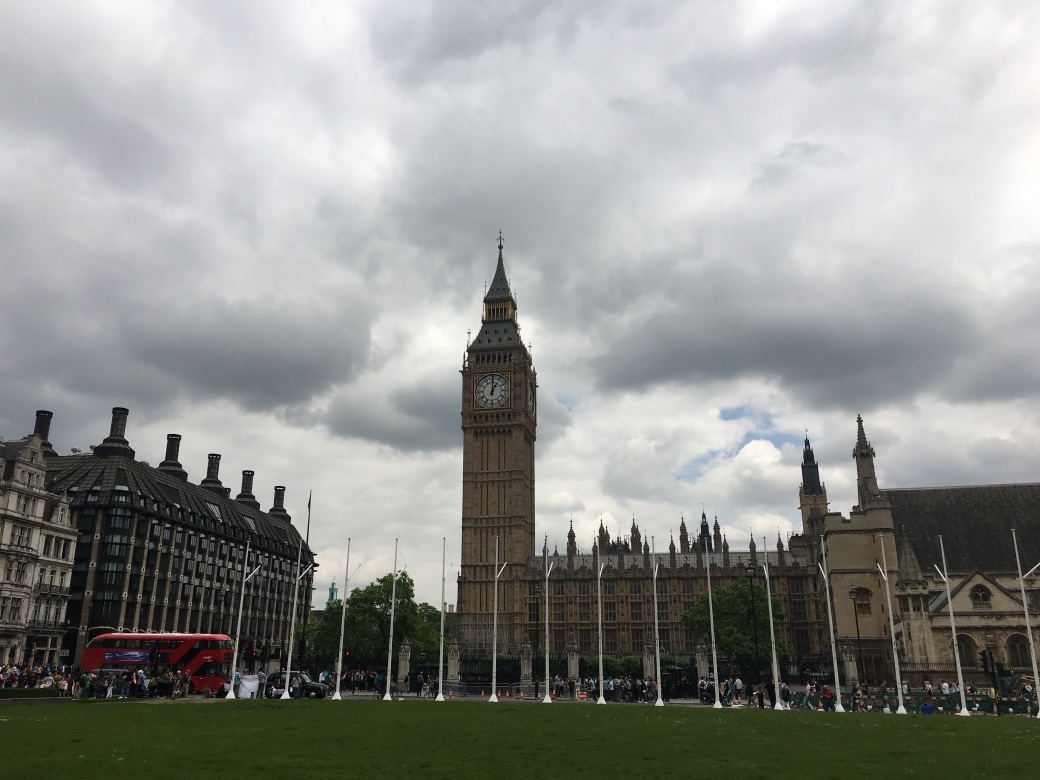 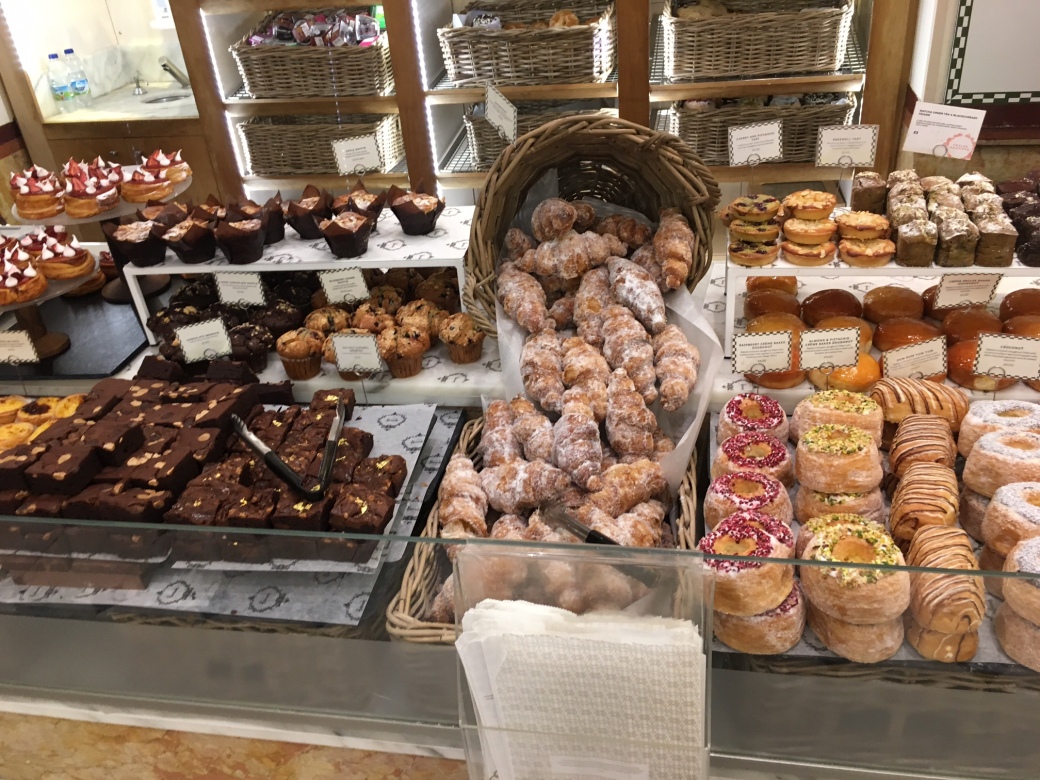 After enjoying a month in France, and many weeks before that in Spain I was told to expect a let down with regards to food in England. However, the cuisine of the whole world can be enjoyed here, and some amazing displays can be found, especially like the one above at Harrod’s. 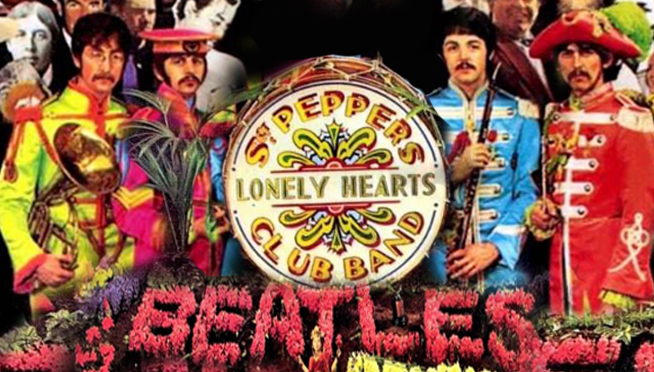 It was exactly 50 years ago – June 1, 1967 – when The Beatle’s released what many people consider the number one album of all time. Although sold out, I was able to score a ticket to the anniversary celebration at Royal Albert Hall. The band playing was called “The Bootleg Beatles.” They performed like, looked like and even spoke like in between songs just like The Beatle’s. The Royal Liverpool Philharmonic Orchestra performed as well so the evening sounded just like the album and other Beatle’s tunes. Amazing night!

“George” even played the sitar on one set, and all four ended the night with “All You Need is Love,” enabling “John” to joke around at the end just like the recording. “Paul” encouraged everyone to stand and sing along, which we all happily did.

Yes, all you need is love.

5 thoughts on “I See London, I Saw France…and The Beatles”