After yoga each morning, I often work in the vast organic garden at the Jiwa Damai Retreat Center. There are over 300 towering coconut trees on the grounds. Occasionally during a day I’d hear a random coconut fall from a tree’s peak, sliding loudly through the palms to crash with a thud on the moist jungle ground. Man, that could be deadly if an unlucky, inattentive person happened to be underneath! I watch with awe and trepidation when the young Balinese workers climb barefoot up a coconut tree to prune and treat the tops. Coconuts and branches really cascade down now, so onlookers are warned.

The coconut provides so much here – oil, water, milk, flour, soap and more. Even the shells serve as decorative borders in the garden. And we chop up the palms and add them to the compost. It’s Bernardo, my co-yoga instructor from Brazil, and the Balinese workers Ketut, Lana, Komang and Kadek chopping away in this photo. Only Lana (in red) speaks English, but you put six guys on a job like this anywhere  and there’s always one thing you can count on –  jokes, especially on each other. We also enjoy learning tips on speaking to women in each other’s language. What’s your name? Sira wastan jerone? 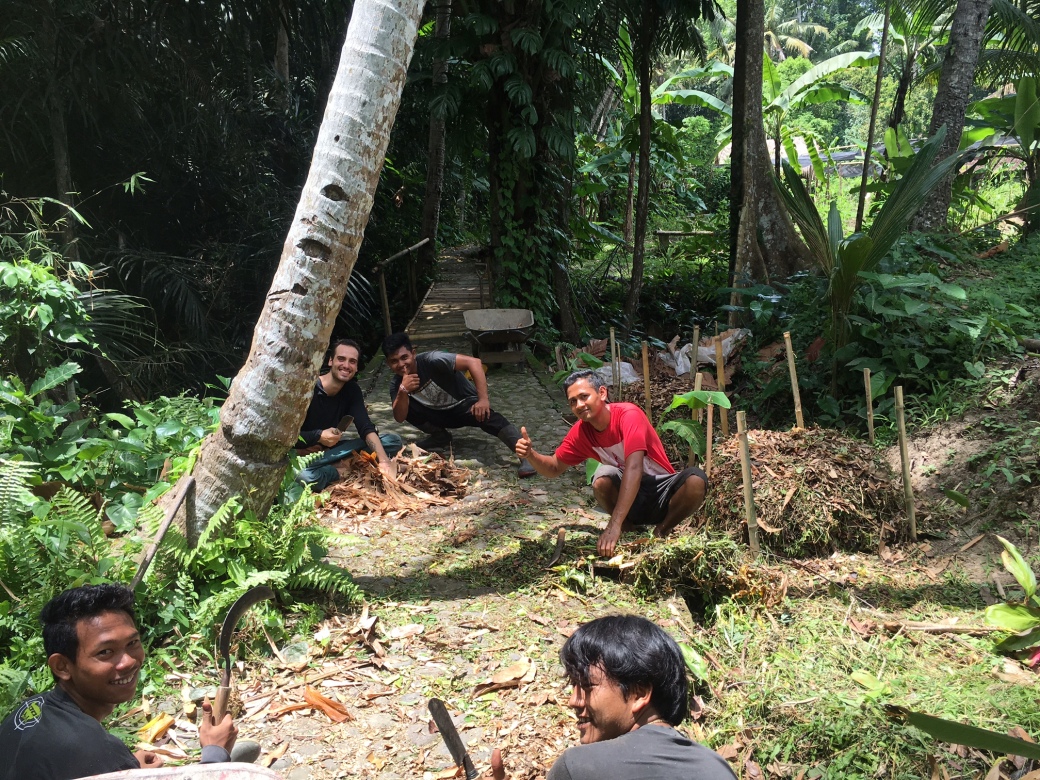 Made (pronounced “Ma-day”) cooks in the Jiwa Damai kitchen and runs the coconut products operation. She owns the sweetest smile but is definitely no-nonsense in charge of her realm. Upon meeting her before even exchanging pleasantries the first words she said to me were to help move a load of coconuts that had just been dropped off. I liked her immediately. Here Made enjoys Hussein’s (a co-worker from Spain) poor attempt to dehusk a coconut.

Made shows Juliana (co-worker from Brazil) how she does her coconut magic. 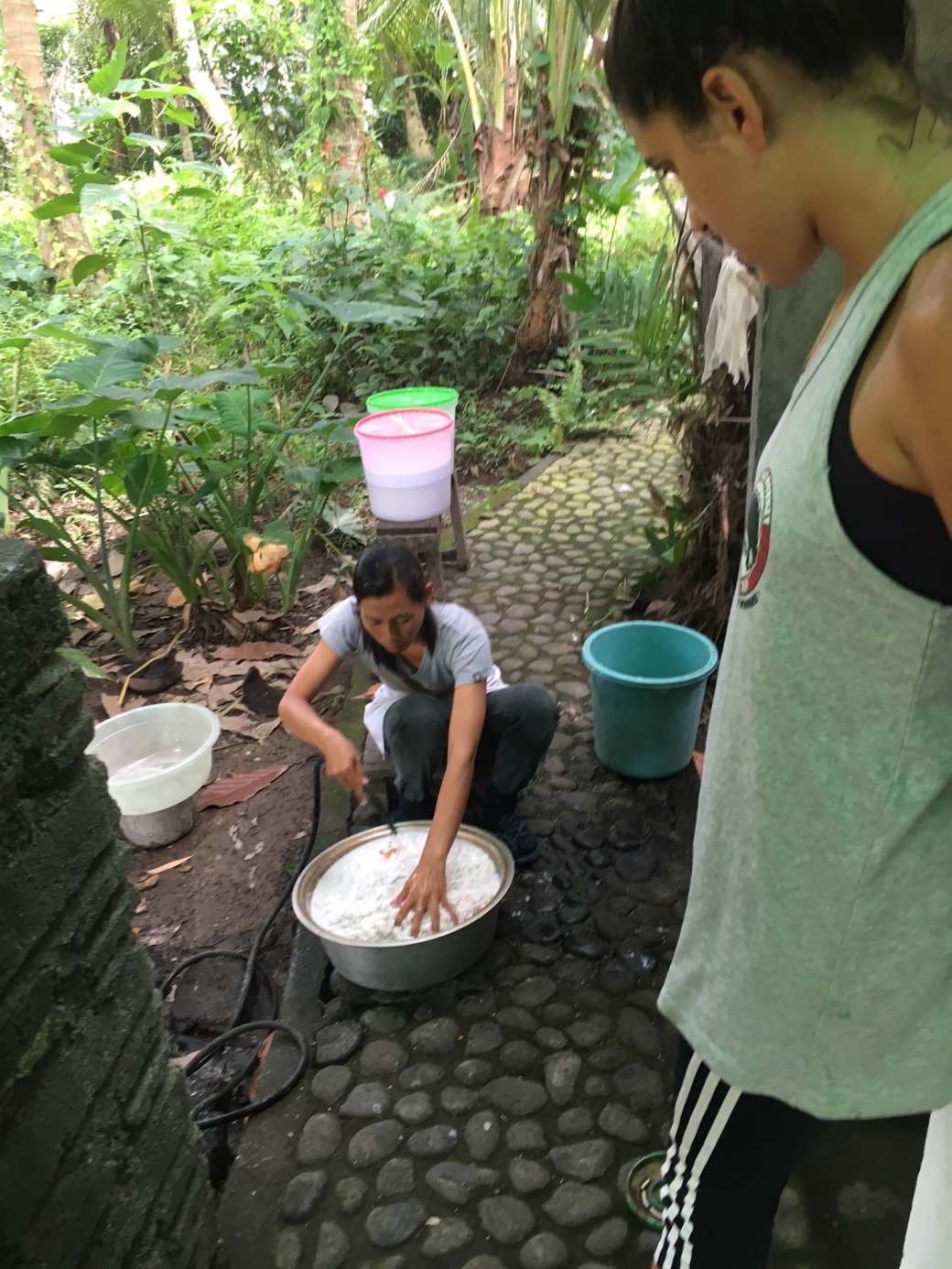 On Saturday, October 22, 2016 our team at Jiwa Damai was invited by the local village of Bindu to put on a farmer’s market. We wore new Jiwa Damai shirts (cool white for Juliana, Hussein and our leader Dr. Margret Rueffler; not so refreshing black on Bernardo and I) and brought organic produce from our garden and other Bali growers, plus a wide range of our coconut and other packaged products. 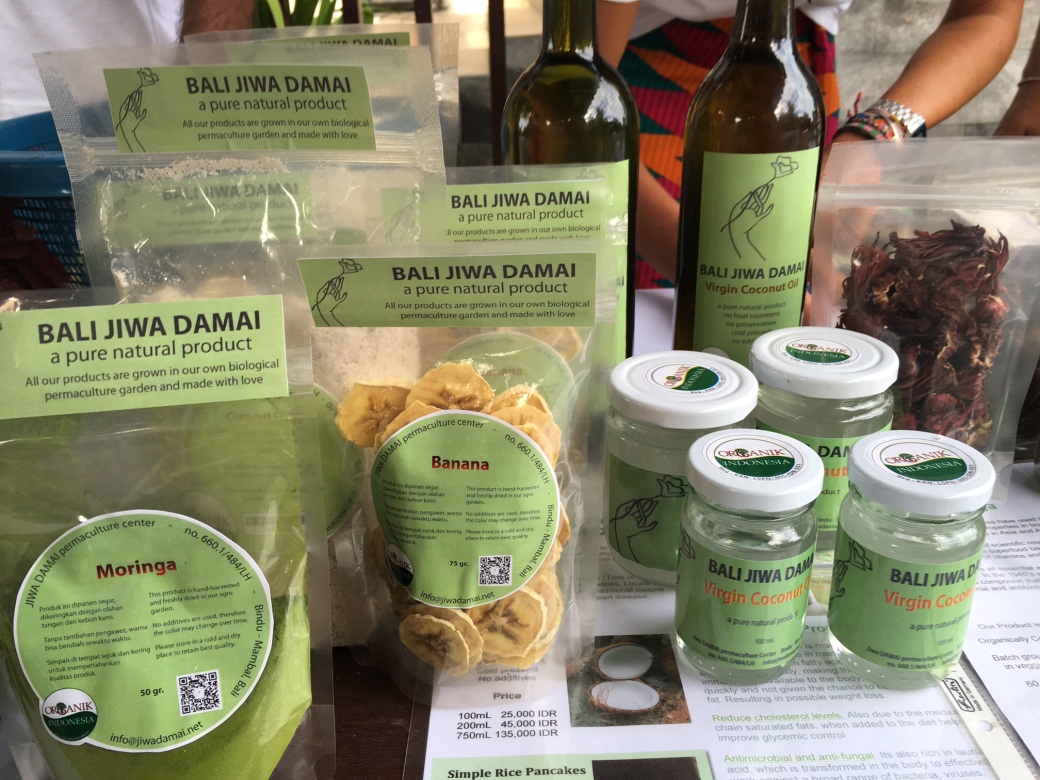 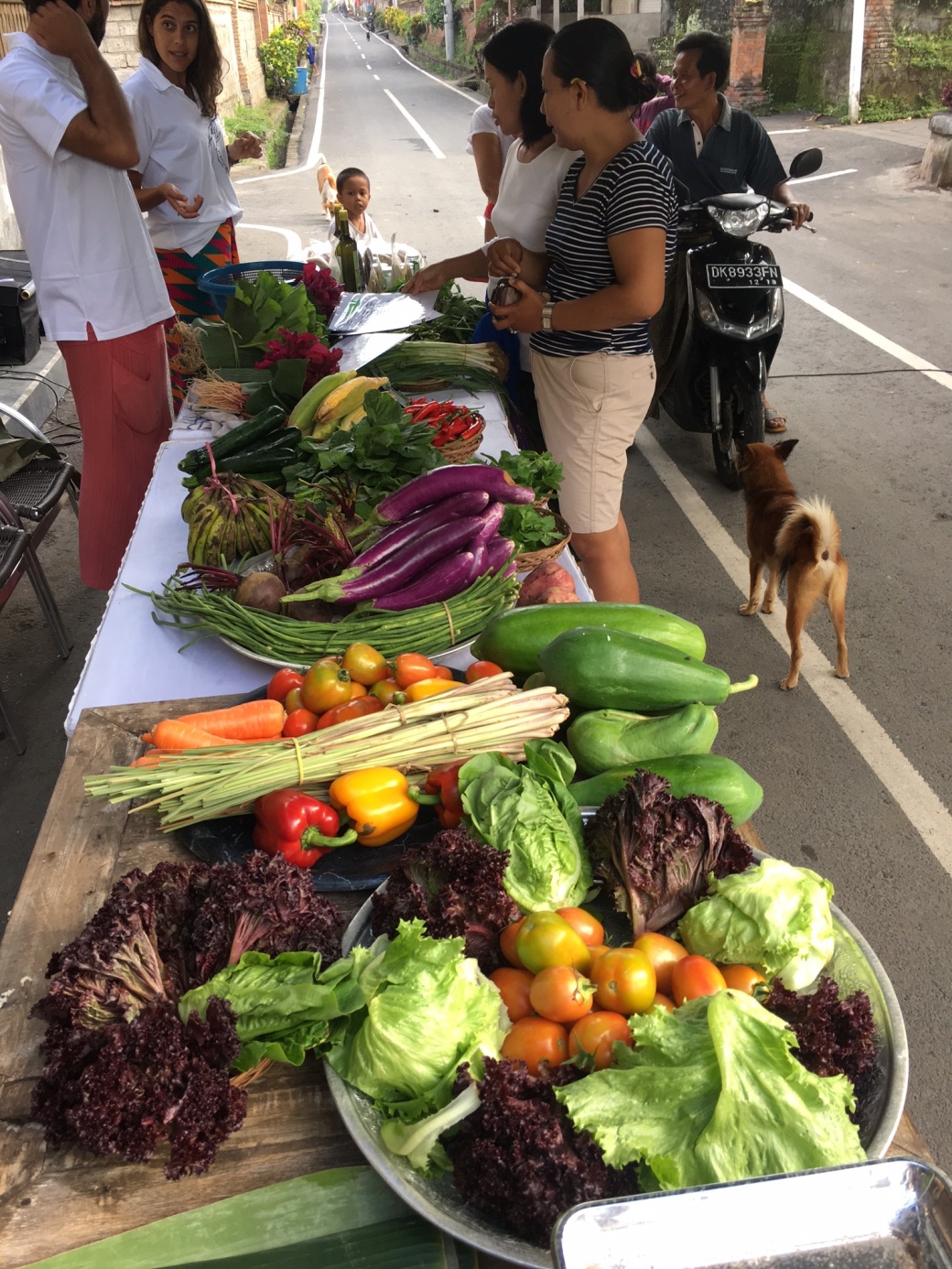 Hussein created a slide show he projected on a screen right on Bindu’s main thoroughfare. Each slide showed a picture of something to eat with the word “Sehat??” (Balinese for “Healthy??”) underneath. The food choices ranged from fruit and vegetables (definitely sehat!) to soda drinks (not sehat) to “Babi Guling,” the popular Balinese dish of suckling pig (will be popular regardless if sehat or not).

Bernardo, who is certified in Thai Massage, set up an area behind the produce stand where he served as our complimentary masseuse. He was busy! So busy that by late morning when the powerful Bali sun shone down on him I noted he was sweating bullets.

We sold everything we brought to the market. Margret confided that Jiwa Damai really just covered expenses on the day, but making big money really wasn’t the point of doing the market. This was an opportunity for all of us to leave the retreat center and get to know better the Balinese people who lived so close to us. As for that goal, the day was a tremendous success. In the days to come, as I walk through the village it is great to greet and talk with so many friends, learning about a side of Bali many visitors never get the chance to experience. For this, I am very grateful.

Later, after the market is taken apart and everything gets transported back to Jiwa Damai and put away, I’m back in the garden picking vegetables for a salad to be served at dinner. I stroll from plot to plot holding out in from of me a big silver mixing bowl borrowed from the kitchen. I find bawang (green onions), tomat kecil (cherry tomatoes), selada (lettuce),  kemangi (basil), and the bayum (spinach) is truly bountiful so I fill my huge shiny saucer with that mostly. Back in the kitchen, I know, there’s a nice mustard and local honey vinaigrette to mix all these fine veggies with. Selat?? You know it! 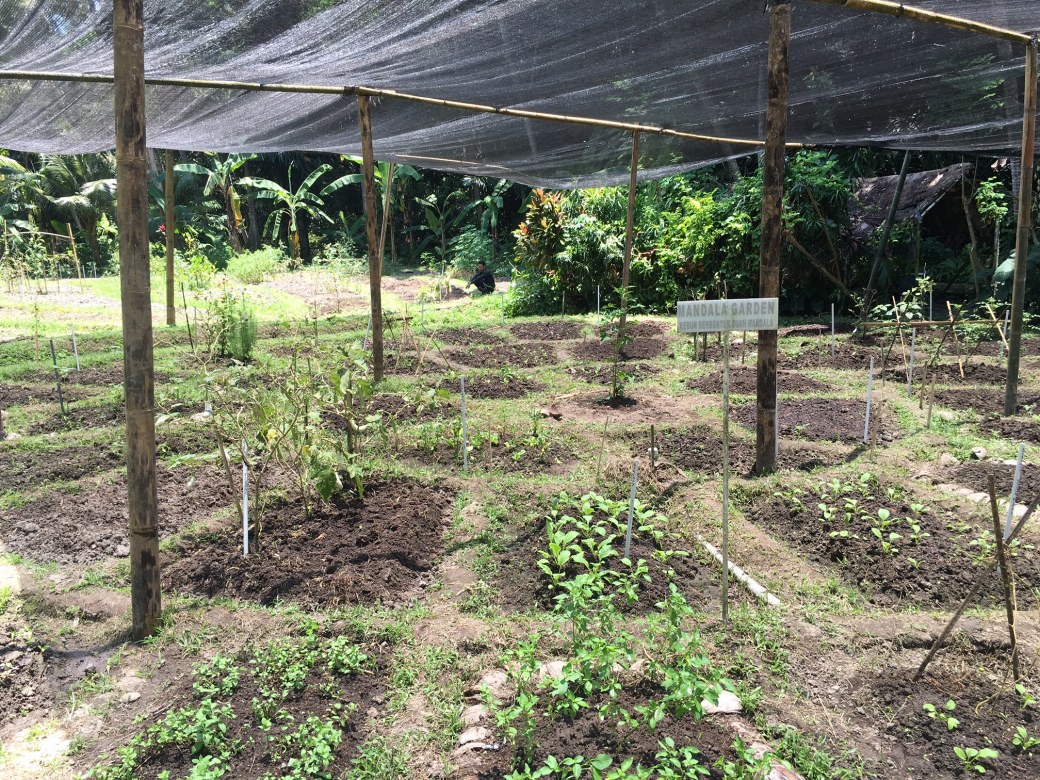 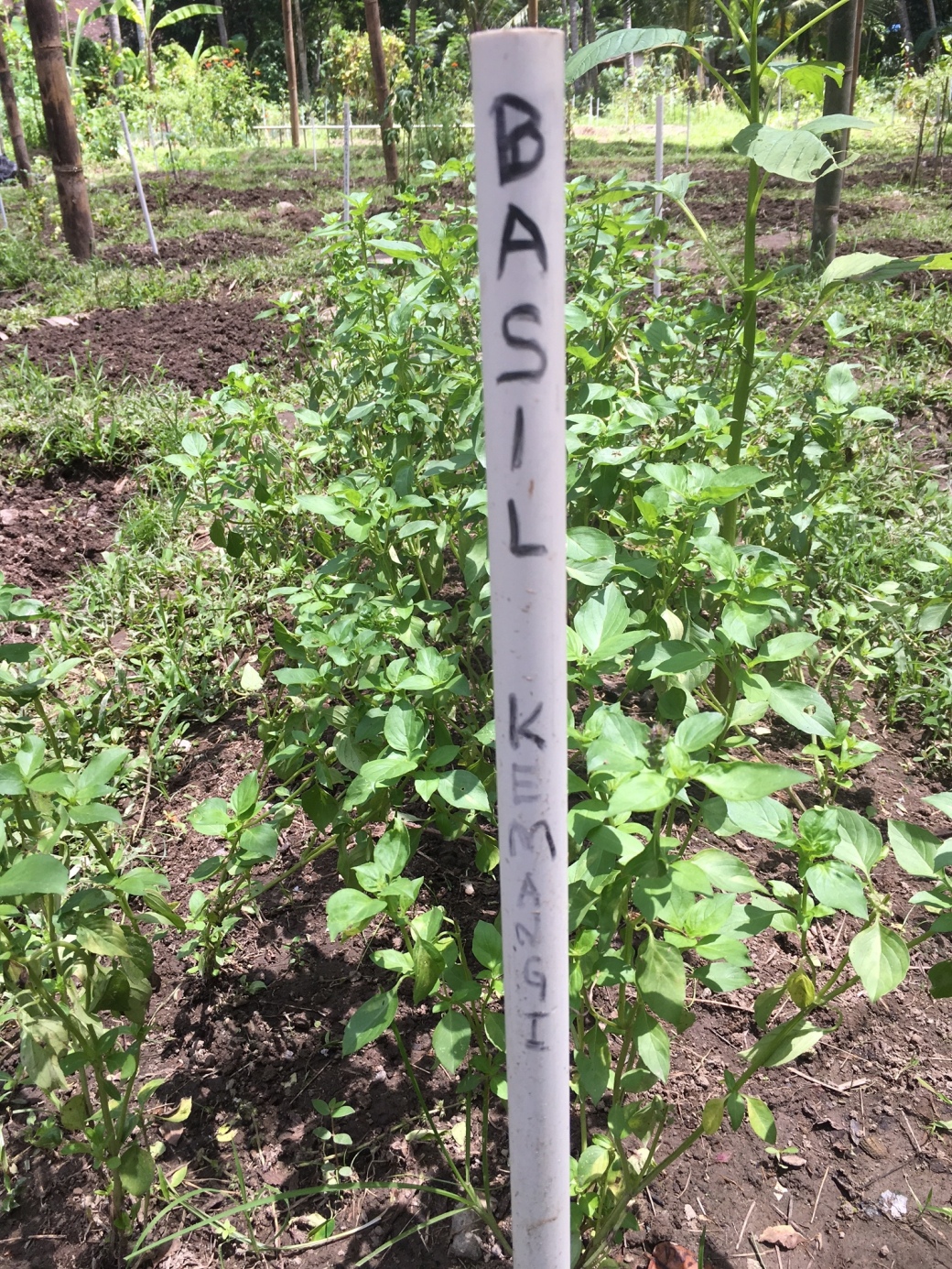